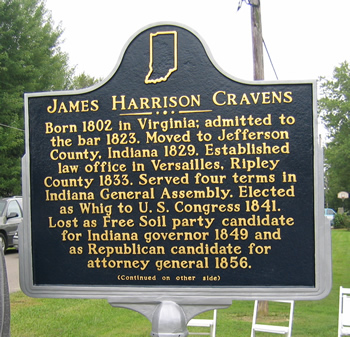 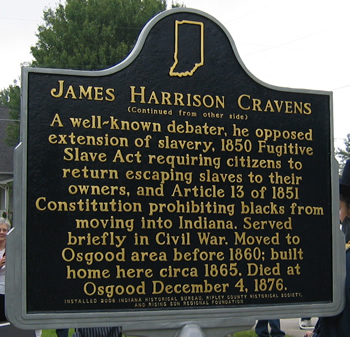 A well-known debater, he opposed extension of slavery, 1850 Fugitive Slave Act requiring citizens to return escaping slaves to their owners, and Article 13 of 1851 Constitution prohibiting blacks from moving into Indiana. Served briefly in Civil War. Moved to Osgood area before 1860; built home here circa 1865. Died at Osgood December 4, 1876.

A well-known debater, he opposed extension of slavery, 1850 Fugitive Slave Act requiring citizens to return escaping slaves to their owners, and Article 13 of 1851 Constitution prohibiting blacks from moving into Indiana.(7) Served briefly in Civil War.(8) Moved to Osgood area before 1860;(9) built home here circa 1865.(10) Died at Osgood December 4, 1876.(11)

(1) There is some confusing information about he date and place of Cravens birth. The Ripley County Historical Society has James Harrison Cravens' family Bible in its collections. Letter, Helen Einhaus to Stephen Berrey, received March 20, 2006. (B00725) It records James' birth on August 12, 1802, in Augusta County Virginia. Family records, James Harrison Cravens family Bible (Philadelphia, 1839), Ripley County Historical Society, photocopy. (B00711) According to the following source, he was born August 2, 1802 in Harrisonburg, Virginia, which is in Rockingham County. He was the son of Dr. Joseph Cravens and his wife Mary. Ruth McConathy, House of Cravens (Charlottesville, Va., 1972), 50. (B00239) Cravens was born August 12, 1802 in Rockingham County, according to A Biographical History of Eminent and Self-made Men of the State of Indiana, 2 vols. (Cincinnati, 1880), 2:263. (B00237). Augusta County was formed in 1745; Rockingham County was formed from part of it in 1778, according to Morgan Poitiaux Robinson, "Virginia Counties: Those Resulting from Virginia Legislation, " in Bulletin of the Virginia State Library, Vol. 9, nos. 1, 2, 3 (Genealogical Publishing Co., 1992), 168-69.

At Franklin, Virginia, on December 23, 1824, James Harrison Cravens married Sophia Capito, daughter of Daniel Capito. (Einhaus to Berrey, B00725) James Harrison Cravens was admitted to the bar in 1823; at some time, he moved his practice to Franklin, Pendleton County, now West Virginia. McConathy, 50 (B00239). Cravens entered law practice November 1823 in Franklin, Pendleton County, Virginia; was admitted to the bar in 1823, after studying with Colonel John Kenney of Harrisonburg. Eminent and Self-made Men, 2: 263. (B00237)

Liberty Party in 1846 in Indiana did not nominate a candidate for State Representative from Ripley County because the party endorsed James H. Cravens as a suitable antislavery candidate. Eminent and Self-made Men, 2: 263-64. (B00237)

(6) James H. Cravens of Ripley County was nominated for Attorney General of Indiana at the Republican State Convention held in Indianapolis, May 1, 1856. Lawrenceburg Democratic Register, May 2, 1856. (B00375)

After Craven's nomination (May 9, 1846) by Whigs of Ripley County for state representative, he was denounced by other Whigs for his views on right of petition and his position against slavery. Cravens responded eloquently with an address "to the Whigs of Ripley County." Eminent and Self-made Men, 2: 263-64. (B00237)

During his Free Soil candidacy, The National Era described Cravens: "Born in slave state; he sacrificed one-third of his property in emancipating his slaves. . . . Solely for his devotion to the cause of Free Democracy, he is now receiving the abuse of certain political organs . . . . Let us show by our votes that we appreciate James H. Cravens. . . . The National Era, July 12, 1849. (B00404)

William W. Woollen opened his biographical sketch of Cravens thus: "James Harrison Cravens, one of the ablest of the men who changed public sentiment in Indiana on the slavery question . . . ." Nominated in 1856 for Indiana Attorney General on the Republican ticket, Cravens made eloquent speeches on behalf of the party and its opposition to the extension of slavery. Woollen, 273, 279. (B00229)

"The Black Republican Nominees . . . . James H. Cravens, of Ripley County, is the candidate for Attorney General. He is a noted abolitionist, of the Giddings, Julian and Garrison school. He was the leader of Van Buren's followers in 1848, and a strong supporter of Hale, in 1852." Lawrenceburg Democratic Register, May 9, 1856. (B00374)

Lawrenceburg Democratic Register May 16, 1856 quoting the N.[ew] A.[lbany] Tribune: "'The most objectionable nominee on the whole State ticket is the Hon. Jas. H. Cravens. . . .' Mr. Gregg is personally acquainted with Mr. Cravens, and of course has good cause for his objections-the principal of which, no doubt, is his abolitionism." Lawrenceburg Democratic Register, May 16, 1856. (B00373)

Lawrenceburg Democratic Register reported August 1, 1856 (B00372) that James H. Cravens, "the Black Republican candidate for Attorney General said in a recent speech at Madison, that he would rather see the Ohio river run pure blood than that another inch of slave territory should be added to the Union."

Cravens bought and sold a lot of land in Ripley County. There is some question regarding when Cravens moved to Osgood; to date it is not possible to indicate a specific year. Deed Records for 1856 and 1857 indicate the following land purchases by Cravens in Osgood.

During the same years, Cravens sold land in Shelby Township, Ripley County, as indicated below.

(10)To date it is not possible to state with certainty when the Cravens home in Osgood was built. In the U.S. Census, 1860, Center Township, Ripley County, Cravens and his family are listed under "Osgood and Otter Village." The value of his real estate is $15, 000. Following is the primary source information that has been located.

Osgood tax records that might indicate when Cravens home was built have not been located. Einhaus to Berrey. (B00725)

According to the Versailles Republican, September 19, 1900, in the obituary of John Andrews, he was described as a carpenter who built "some of the finest residences in Osgood, among them being that of the late Col. James H. Cravens." (B00715) NOTE: The U.S. Census, 1870, Ripley County, Center Township lists James H. Cravens and his wife under the Versailles Post Office. It is unclear why they were listed under this post office instead of the Osgood Post Office. Einhaus to Berrey, (B00725) According to Baker's Postal History of Indiana there were post offices at both Versailles and Osgood.