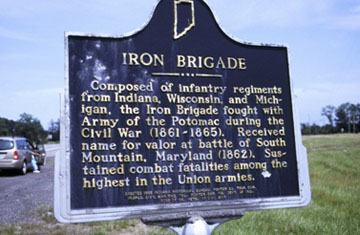 Composed of infantry regiments from Indiana, Wisconsin, and Michigan, the Iron Brigade fought with Army of the Potomac during the Civil War (1861-1865). Received name for valor at battle of South Mountain, Maryland (1862). Sustained combat fatalities among the highest in the Union armies.