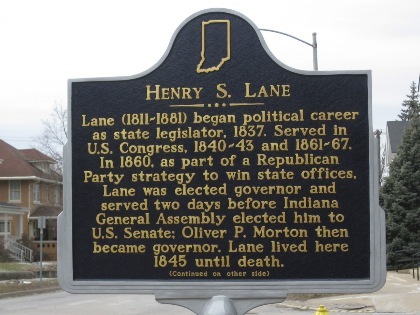 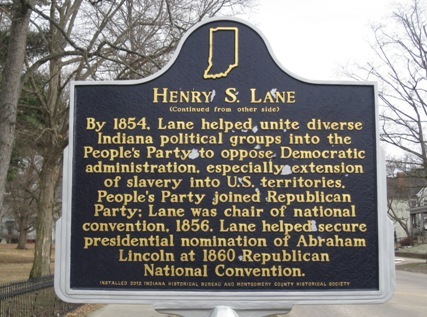 Visit the Indiana History Blog to learn more about the architect of Indiana's Republican Party.

Lane was born February 24, 1811 in Montgomery County, Kentucky. By 1834 Lane had moved to Crawfordsville, Indiana, and began practicing law there. For information on his death, see footnote 5.

Lane was elected as a Whig to the U.S. House of Representatives, Twenty-Sixth Congress as a result of special election August 3, 1840, to replace Tilghman Howard, a candidate for Indiana governor. Lane was re-elected May 3, 1841 and served until August 6, 1843. During the Mexican War, Lane raised and served as captain of the First Regiment of Indiana Volunteers, mustered in June 20, 1846. He mustered out with his company June 16, 1847, having been promoted to lieutenant colonel. In 1849, Lane was defeated in another race for the U.S. House of Representatives. Like many Whigs, in the 1850s Lane became an important member of the People's Party which became the Republican Party. See footnote 6 for information on Lane's role in the formation of the Republican Party.

In February 1857, Indiana Republican senators and representatives refused to attend a joint convention to elect Indiana's U.S. senators. The Democratic attendees proceeded to elect Graham Fitch and Jesse Bright. Despite protests by Republicans that this election was illegal, the U.S. Senate declared Bright and Fitch seated June 12, 1858. On November 24, 1858, the Indiana Senate (composed of both Democrats and Republicans) voted on the legality of the 1857 election. With a vote of 26 to 22 the Senate passed a resolution that the 1857 election was illegal and that Indiana was not represented in the U.S. Senate. On December 22, 1858 the Indiana General Assembly elected Lane along with William M. McCarty to replace Bright and Fitch in the U.S. Senate. The democratic-controlled U.S. Senate, however, denied them the floor and refused to seat them. It recognized Bright and Fitch as legal members of the U.S. Senate and resolved that no change could be made after seating them. Thus, Lane and McCarty did not serve their elected terms. Lane finally gained his Senate seat in 1860 after first being elected to, and then resigning from, the office of governor of Indiana. He served as a Republican in the U.S. Senate March 4, 1861 - March 4, 1867. See footnote 4 for more information on the political strategy that resulted in this election.

In 1860, members of the Republican Party planned a strategy to win the Indiana governorship, a majority in the Indiana General Assembly, and a seat in the U.S. Senate. Because the Republican Party in Indiana consisted of many different factions of political belief, Lane and Morton could only win a decisive victory by running together. While Morton was intended by the party to become governor, his stance on slavery was considered too radically abolitionist for many conservative party members. Lane was much more conservative (opposing only extension of slavery) and brought all of the former Whigs into the party. (See footnote 6 for more information on Lane's stance on slavery.) Morton, a former Democrat, brought the anti-Nebraska democrats to the party. Thus, Lane ran for governor and Morton for lieutenant governor. Together, they were unbeatable against the divided Indiana Democratic Party. The Republicans swept the election, winning the governorship and a majority in both houses of the Indiana General Assembly.

After winning the gubernatorial race, Lane, the governor elect, announced his candidacy for U.S. senator, the position he had originally desired. Lane served two days as governor (sworn into office January 14) before being elected to the U.S. Senate by the Republican-dominated Indiana General Assembly on January 16, 1861. On that same day, Lane resigned as governor. As arranged previously, Oliver P. Morton then became governor. Schuyler Colfax's letter to Abraham Lincoln suggests that the party, at the national and state level, was developing the strategy as early as summer of 1860. William P. Dole's letter to Lane also suggests Lincoln was aware of and supportive of the strategy. Several letters in the Henry S. Lane Manuscript Collection show that Lane's intention was always a U.S. Senate seat. Indiana legislator Pleasant A. Hackleman referred to a private letter from Lane:

Lane explained his choice to run for governor in a November 27, 1860 letter:

"I frankly confess that it was because I desired a reelection as senator, that I hesitated about being a candidate for Governor . . . it was urged by the Republicans of the State that my nomination was essential to our success in the October election . . . I yielded to their wishes and the result is known[.] It is now in the power of a Republican Legislature to give me such a certificate of election as cannot be disregarded by the Senate . . . now if you can give me your support for the Senate consistently with your sense of duty to the public such support will be fully appreciated by your friend."

Lane received the deed to a plot of land in Crawfordsville, Indiana September 17, 1844. According to the Montgomery County Historical Society, which maintains the home now called Lane Place, Lane built his house in 1845. Both the 1878 Land Ownership Map of Crawfordsville and the Google Map accessed 2012 show Lane's plot of land at the corner of Wabash Avenue and Water Street. According to the MCHS, Lane lived continually at the house when not in Washington D.C. from 1845 until his death. Lane died at home June 18, 1881 and was buried in nearby Oak Hill Cemetery. Lane Place is open to the public.

In 1854, Congress passed the Kansas-Nebraska Act which repealed theMissouri Compromise and allowed slavery into the U.S. Territories. The bill was sponsored by Illinois Democratic Senator Stephen Douglass and supported and signed into law by Democratic President Franklin Pierce. Opposition to the Democratic administration and especially the extension of slavery united various disparate political groups into a new party -called the Republican Party nationally, but called the People's Party in Indiana. In 1854, the young Indiana party was more conservative than the national Republican Party. The People's Party resisted adopting the name "Republican" because of its association with the eastern abolition movement that many Hoosiers saw as too radical.

Henry S. Lane was essential in organizing the People's Party in Indiana. Lane's influence over the older Whigs brought most into the People's Party, while abolitionists joined because of the anti-Kansas-Nebraska Act platform. A dynamic and popular speaker, Lane also helped to convince many Democrats and Know-Nothings who were opposed to slavery extension to join the People's Party. With the goal of bringing as many people to the new party as possible, Lane maintained a moderate position in the 1850s, publically speaking against only the extension of slavery, not advocating for its abolition. In 1855, he wrote to Schuyler Colfax, "We must resist the encroachment of Slavery, if we would preserve the rights of Freedom." In his 1856 address to the Republican National Convention, Lane reiterated that the party opposed only extension of slavery, not its abolition, but added that he believed the Declaration of Independence to be "an anti-slavery document." He described the Republican Party as representing "every shade of Anti-slavery sentiment in the United States" and that the party hoped to see a time when God would "look upon no slave North or South. "He continued:

"Freedom is national. Freedom is the general rule. Slavery is the exception. It exists by sufferance. Where it does exist under the sanction of the law, we make no war upon it. Does that constitute us Abolitionists, simply because we are opposed to the extension of slavery? If that makes an Abolitionist, write 'Abolitionist' all over me."

After the Civil War, Lane advocated for additional rights for African Americans and supported the Freedman's Bureau Bill, created to assist in the transition from slavery to freedom. In an 1866 speech on reconstruction, Lane asserted that before secessionists could be represented in government, several amendments needed to be adopted, including suffrage for African American men:

But gentlemen ask us when shall this return [to representation in Congress] take place? I answer the question thus: when the constitutional amendments shall all have passed Congress, and been

ratified by a competent number of States; when the State legislation shall be conformed

to the changed condition of public affairs; when the colored man shall be recognized as

a citizen and as a man, and his rights shall be protected; when the Freedmen's

Bureau bill shall have passed both Houses, and been put in practical operation; when the

the President; when the State constitutions shall have been ratified by the popular

vote -- then, and not until then, shall I vote for the representation of the rebel States ...

By evening of the second day of the convention, May 17, 1860, it seemed certain to most attendees that William H. Seward, an outspoken senator from New York, would become the Republican presidential nominee. However, according to Murat Halstead, a newspaper reporter for the Cincinnati Commercial who attended all sessions of the convention, Lane was among a few dedicated delegates who stayed up all night advocating for Abraham Lincoln as the best (and more moderate) presidential candidate. Halstead reported:

". . . Every one of the forty thousand men in attendance upon the Chicago Convention will testify that at midnight of Thursday-Friday night, the universal impression was that Seward's success was certain . . . But there was much done after midnight and before the Convention assembled on Friday morning. . . I saw Henry S. Lane at one o'clock, pale, and haggard, with cane under his arm, walking as if for a wager, from one caucus room to another, at the Tremont House. He had been toiling with desperation to bring the Indiana delegation to go as a unit for Lincoln. And then in connection with others, he had been operating to bring the Vermonters and Virginians to the point of deserting Seward."

Lane was a candidate for Indiana governor while attending the convention. He, along with gubernatorial candidates from Illinois and Pennsylvania, threatened to resign if Seward was elected as a tactic to secure more support for Lincoln. After Indiana delegates delivered all 26 of their votes for Lincoln, Halstead observed:

"This solid vote was a startler [sic], and the keen little eyes of Henry S. Lane glittered as it was given. He was responsible for it . . . When he found that the contest was between Seward and Lincoln, he worked for the latter as if life itself depended upon success."

Several prominent politicians later noted Lane's role in Lincoln's nomination in their correspondence. In an 1860 letter to Lane requesting a letter of recommendation to Lincoln for appointment as Commissioner of Indian Affairs, Illinois politician William P. Dole wrote:

"Knowing as I do Mr. Lincoln's desire to return in some degree the services you rendered him at Chicago as well as his high personal regard for you, I have great confidence that your letter will be of great service to me."

U.S. Representative from Indiana, Schuyler Colfax, wrote to Lane in 1861 that he had spoken to Lincoln to ensure Lane received credit for his efforts in nominating Lincoln.