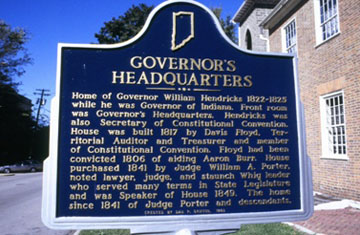 Home of Governor William Hendricks 1822-1825 while he was Governor of Indiana. Front room was Governor's Headquarters. Hendricks was also Secretary of Constitutional Convention. House was built 1817 by Davis Floyd, Territorial Auditor and Treasurer and member of Constitutional Convention. Floyd had been convicted 1806 of aiding Aaron Burr. House purchased 1841 by Judge William A. Porter, noted lawyer, judge, and staunch Whig leader who served many terms in State Legislature and was Speaker of House 1849. The home since 1841 of Judge Porter and descendants.