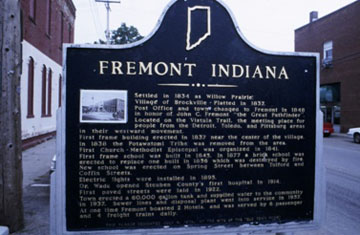 Credit Line: This plaque dedicated July 4, 1976 at the site of the "ole town pump"

Settled in 1834 as Willow Prairie; Village of Brockville - Platted in 1837. Post Office and town changed to Fremont in 1848 in honor of John C. Fremont "the Great Pathfinder". Located on the Vistula Trail, the meeting place for people from the Detroit, Toledo, and Pittsburg areas in their westward movement. First frame building erected in 1837 near the center of the village. In 1838 the Potawatomi Tribe was removed from the area. First Church - Methodist Episcopal was organized in 1841. First frame school was built in 1845. In 1877 a brick school was erected to replace one built in 1856 which was destroyed by fire. New school was erected on Spring Street between Tolford and Coffin Streets. Electric lights were installed in 1895. Dr. Wade opened Steuben County's first hospital in 1914. First paved streets were laid in 1922. Town erected a 60, 000 gallon tank and supplied water to the community in 1937. Sewer lines and disposal plant went into service in 1957. At one time Fremont boasted 2 Hotels, and was served by 6 passenger and 4 freight trains daily. [illustration]