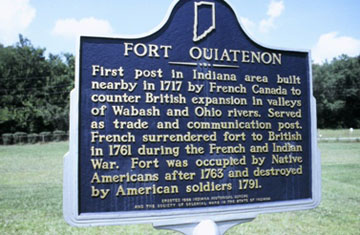 Erected 1998 Indiana Historical Bureau and The Society of Colonial Wars in the State of Indiana.

First post in Indiana area built nearby in 1717 by French Canada to counter British expansion in valleys of Wabash and Ohio rivers. Served as trade and communication post. French surrendered fort to British in 1761 during the French and Indian War. Fort was occupied by Native Americans after 1763 and destroyed by American soldiers 1791.