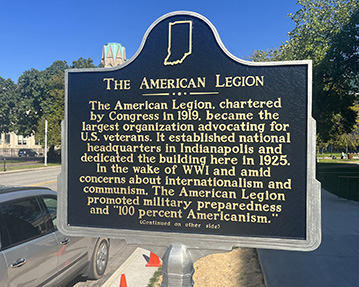 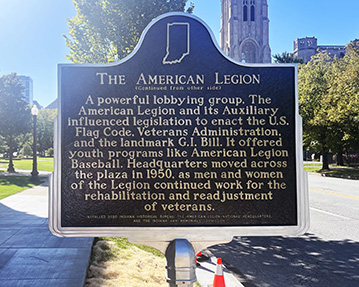 The American Legion, chartered by Congress in 1919, became the largest organization advocating for U.S. veterans. It established national headquarters in Indianapolis and dedicated the building here in 1925. In the wake of WWI and amid concerns about internationalism and communism, The American Legion promoted military preparedness and “100 percent Americanism.”

A powerful lobbying group, The American Legion and its Auxiliary influenced legislation to enact the U.S. Flag Code, Veterans Administration, and the landmark G.I. Bill. It offered youth programs like American Legion Baseball. Headquarters moved across the plaza in 1950, as men and women of the Legion continued work for the rehabilitation and readjustment of veterans.