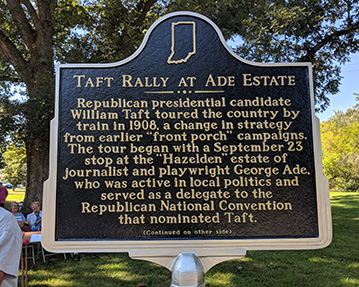 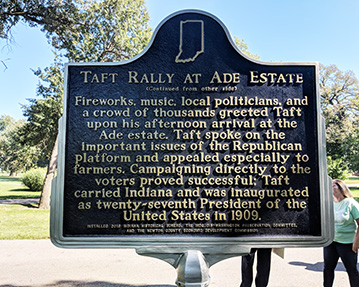 Visit the Indiana History Blog to learn more about this "Republican Game-Changer: 1908 Taft Rally in Indiana."

Republican presidential candidate William Taft toured the country by train in 1908, a change in strategy from earlier “front porch” campaigns. The tour began with a September 23 stop at the “Hazelden” estate of journalist and playwright George Ade, who was active in local politics and served as a delegate to the Republican National Convention that nominated Taft.

Fireworks, music, local politicians, and a crowd of thousands greeted Taft upon his afternoon arrival at the Ade estate. Taft spoke on the important issues of the Republican platform and appealed especially to farmers. Campaigning directly to the voters proved successful; Taft carried Indiana and was inaugurated as twenty-seventh President of the United States in 1909.

During the 1908 presidential campaign, both major party candidates toured the country to appeal directly to voters. This marked a shift from the traditional “front porch” campaigns where candidates spoke to assembled reporters and audiences on political issues from their own homes. In fact, the roots of our modern political spectacle of aggressive campaigning can be found in the active campaigns of Republican William Howard Taft and Democrat William Jennings Bryan.

Before securing the Republican presidential nomination in July 1908, Taft served as U.S. Solicitor General, Circuit Court of Appeals judge, and as civil governor of the Philippines (then a U.S. protectorate). He became a close advisor to President Theodore Roosevelt, who appointed him U.S. Secretary of War in 1904. When Roosevelt decided not to run for reelection, he personally endorsed his friend Taft for the job. Roosevelt was popular with voters and his support gave Taft a valuable advantage.

The September 1908 decision of Taft and the Republican Party leadership to have the candidate tour the country by train and directly address the constituency was made in large part to repair Taft’s image. As a judge he had often sided against labor, for example, deciding against the workers of the Chicago Pullman Strike in 1894. The Republican Party needed to be seen as more progressive and as the friend of the working man. Thus, it was important for Taft to assure farmers and laborers that the Republican Party had their interests in mind, to draw attention to aspects of the Republican Party platform that would appeal to them, and to come off as a likeable man of the people.

Meanwhile in the Hoosier state, the Indiana Republican Party was split over the temperance issue (prohibition or local option). Local leaders hoped that a visit from a national candidate could unify the party, at least for long enough to push through a Republican state ticket. Charles S. Hernly, Chairman of Indiana's State Republican Committee, planned an enormous rally for the state’s farmers at the estate of George Ade, inviting local and national Republican candidates.

George Ade was a native of Newton County, a beloved Indiana author, and a dabbler in local politics. He lived on a large estate just outside Brook, Indiana, that he named “Hazelden.” Ade had also served as a delegate to the Republican National Convention in Chicago that nominated Taft as well as a member of the Notification Committee. While Ade was at first reluctant to host such a large event, he wanted to support the efforts of the Party. Taft accepted Hernly’s invitation and announced that his national tour would begin September 23, 1908 at Ade’s estate.

The day included elaborate decorations, music, fireworks, a barbecue, and speeches by local politicians. Thousands of farmers and their families attended. Taft spoke directly to their concerns, assuring them that the Republican Party was working to increase farm prosperity through maintenance of the gold standard and programs like free rural mail delivery. Taft’s strategy was successful in Indiana and the country. While democrats swept the state ticket, Taft won Indiana by over 10,000 votes. He won 321 electoral votes and 51.6% of the popular vote, an overwhelming victory. Taft was inaugurated March 4, 1909 as the 27th President of the United States and served until March 4, 1913.

Republican presidential candidate William Taft[1] toured the country by train in 1908,[2] a change in strategy from earlier “front porch” campaigns.[3] The tour began with a September 23 stop at the “Hazelden” estate [4] of journalist and playwright George Ade,[5] who was active in local politics and served as a delegate to the Republican National Convention that nominated Taft.[6]

Fireworks, music, local politicians, and a crowd of thousands greeted Taft upon his afternoon arrival at the Ade estate.[7] Taft spoke on the important issues of the Republican platform and appealed especially to farmers.[8] Campaigning directly to the voters paid off; Taft won Indiana and was inaugurated as the twenty-seventh President of the United States in 1909. [9]

Indiana delegates to the June 19, 1908 Republican National Convention in Chicago first supported Hoosier Charles W. Fairbanks during the nomination process. However, when Taft won on the first ballot, Hoosier delegates, including George Ade, heartily threw their support behind Taft. Ade wrote the next day to congratulate Taft. See footnote 6 for more on Ade at the convention

Taft’s campaign tour began in the Midwest and continued to the Northwest and West, before returning to the Midwest. Also on September 23, Taft’s train stopped briefly in Indianapolis on the way to Brook, Indiana. Local politicians boarded; Taft did not make a speech. The train made one other Indiana stop, which was impromptu, at Indiana Harbor in Lake County. Taft spoke for seven minutes, appealing to the labor vote and rehearsing sections of the speech he made later that night in Chicago.

The marker is located in Brook, Indiana, at the grounds purchased by George Ade in 1902 which included his large home, a caretaker’s cottage, several other buildings, a swimming pool, and manicured gardens. He named the estate “Hazelden” and lived there for forty years starting circa 1905.

In addition to serving as a delegate to the convention, Ade was also a member of the official committee that notified Taft of his nomination. According to McMains (who cited a letter June 24, 1908 letter from Taft to Ade), Taft remembered Ade from the notification committee and this influenced the candidate’s decision to come to Brook.

Newspaper estimates of the size of the crowd varied wildly with the Indianapolis News estimating 8,000 to 9,000 people and the Brook Reporter estimating 25,000.

The Evening Banner printed the Republican Party platform as announced at the National Convention, which highlighted the party’s commitment to providing federal aid to farmers and a promise to extend the rural free delivery system. In his speech at Brook, Taft referred to the platform and the success of past Republican administrations in improving the standard of living for farmers.

Taft’s active, even “aggressive” [Baltimore Sun], campaigning through extensive touring, speaking, and shaking as many hands as possible, proved successful. On November 4, 1908 Taft won the presidential election. Indiana voters chose Taft (by 10,000 votes) but the Democratic Party swept the state ticket. The Indiana Republican Party was injured by its split over temperance and possibly, according to McMains, by Taft’s failure to address any state issues during his stop at Brook.