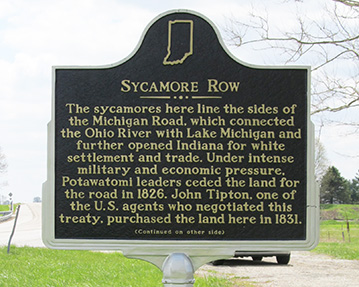 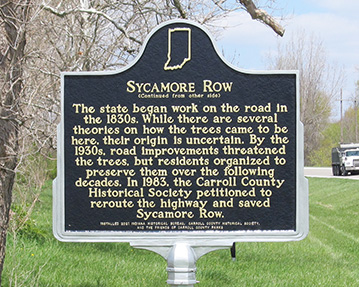 This marker replaces 08.1963.1 Sycamore Row, which was damaged and removed.

Learn about the legend of the sycamores and the removal of the Potawatomi to build the Old Michigan Road through a two-part post on the Indiana History Blog.

The sycamores here line the sides of the Michigan Road, which connected the Ohio River with Lake Michigan and further opened Indiana for white settlement and trade. Under intense military and economic pressure, Potawatomi leaders ceded the land for the road in 1826. John Tipton, one of the U.S. agents who negotiated this treaty, purchased the land here in 1831.

The state began work on the road in the 1830s. While there are several theories on how the trees came to be here, their origin is uncertain. By the 1930s, road improvements threatened the trees, but residents organized to preserve them over the following decades. In 1983, the Carroll County Historical Society petitioned to reroute the highway and saved Sycamore Row.

The sycamores here line the sides of the Michigan Road, which connected the Ohio River with Lake Michigan[1] and further opened Indiana for white settlement and trade.[2] Under intense military and economic pressure, Potawatomi leaders ceded the land for the road in 1826.[3] John Tipton, one of the U.S. agents who negotiated this treaty,[4] purchased the land here in 1831.[5]

The state began work on the road in the 1830s.[6] While there are several theories on how the trees came to be here, their origin is uncertain.[7] By the 1930s, road improvements threatened the trees,[8] but residents organized to preserve them over the following decades.[9] In 1983, the Carroll County Historical Society petitioned to reroute the highway and saved Sycamore Row.[10]

[1] Ratified Indian Treaty 146: Potawatomi - Near Mouth of Mississinewa Upon the Wabash, October 16, 1826, National Archives Catalogue No. 121651643, Record Group 11, National Archives, https://catalog.archives.gov/id/121651643; Indiana Executive Proceedings No. 599: Michigan & Ohio Road, Canal &c, February 12, 1828, in Dorothy Riker, ed., Executive Proceedings of the State of Indiana (Indianapolis: Indiana Historical Bureau, 1947), 684.
The short stretch of road lined with sycamore trees in Carroll County is a section of the original Old Michigan Road. The Old Michigan Road connected the Ohio River at Madison with Lake Michigan at Michigan City, passing through Indianapolis. The State of Indiana built the road after U.S. government commissioners (along with military and economic warfare) pressured the Potawatomi to cede 69,152 acres of land for the right of way in 1826. See next note. The state then sold the land for $200,000, which covered the cost of building the road.

[2] Ibid.; Irving McKee, ed., The Trail of Death Letters of Benjamin Marie Petit (Indianapolis: Indiana Historical Society, 1941); Juanita Hunter, “The Indians and the Michigan Road,” Indiana Magazine of History 83, No. 4 (September 1987), 244-266, accessed JSTOR; “Trail of Death,” Citizen Potawatomi National Cultural Heritage Center, https://www.potawatomiheritage.com/encyclopedia/trail-of-death/; Nellie Armstrong Robertson and Dorothy Riker, eds., John Tipton Papers, Volume II (Indianapolis: Indiana Historical Bureau, 1942), Indiana State Library Digital Collections.
The commissioners who negotiated the 1826 treaty along with state and U.S. government officials intended the Michigan Road to open up Indiana to further white settlement through removal of the Potawatomi. They knew that the Michigan Road would not only help white settlers travel further into Potawatomi Territory to encroach on their land, but that through settlement along the state-owned route, white settlements would fracture Potawatomi territory and isolate bands. John Tipton wrote:
"It was then important that the Indians be separated into bands, by the intervention of our settlements . . . We cold not purchase any particular district near the centre of the Pattawatamie [sic] country; but that tribe freely consented to give us land for the road described in the treaty, and for the settlement along it. Such a road . . . will sever their possessions, and lead them at no distant day to place their dependence upon agricultural pursuits, or to abandon the country."
This fracturing then impeded indigenous people’s ability to survive off the land, create dependence on U.S. goods, drive them into debt, and lead to further land cessions. This plan worked, culminating in the Trail of Death in 1838 when most of the remaining Potawatomi were forcibly removed to Kansas. The Pokagon Band of Potawatomi remained in Indiana and thrive today as a sovereign nation.

[3] Thomas Jefferson to William Henry Harrison, February 27, 1803, Founders Online, National Archives, https://founders.archives.gov/documents/Jefferson/01-39-02-0500; Ratified Indian Treaty 146: Potawatomi - Near Mouth of Mississinewa Upon the Wabash, October 16, 1826, National Archives Catalogue No. 121651643, Record Group 11, National Archives, https://catalog.archives.gov/id/121651643; Cass, Ray, and Tipton to James Barbour, October 23, 1826, in Nellie Armstrong Robertson and Dorothy Riker, eds., John Tipton Papers Volume I: 1809-1827 (Indianapolis: Indiana Historical Bureau, 1942, Indiana State Library Digital Collections; Jill Weiss Simins, “Democracy for Some: Defining the Indiana Landscape through the Rectangular Survey System,” Indiana History Blog, December 12, 2017, https://blog.history.in.gov/democracy-for-some-defining-the-indiana-landscape-through-the-rectangular-survey-system/.
Since the formation of the Republic, the U.S. government mercilessly persecuted indigenous people. As land-hungry settlers moved into the Northwest Territory at the close of the eighteenth century, they waged total war in an attempt to kill, pacify, and remove all native peoples, including the Potawatomi. They also applied intense economic pressure. As the U.S. government and settlers took more and more indigenous land, the remaining groups lost their traditional ways of life and became dependent on annuities and pushed into debt. This was an intentional tactic of the U.S. government. As Thomas Jefferson explained to William Henry Harrison in an 1803 letter: “We shall push our trading houses, and be glad to see the good and influential individuals among [Great Lakes Indians] run in debt, because we observe that when these debts get beyond what the individuals can pay, they become willing to lop them off by a cession of lands.” The commissioners tasked with treaty making with the Potawatomi promised annuities and payments of debt in return for land cessions for the Michigan Road. The 1826 treaty was also called the Treaty of Mississinewa.

[4] Nellie Armstrong Robertson and Dorothy Riker, eds., John Tipton Papers Volume I: 1809-1827 (Indianapolis: Indiana Historical Bureau, 1942, Indiana State Library Digital Collections; “Trail of Death,” Citizen Potawatomi Nation Cultural Heritage Center, https://www.potawatomiheritage.com/encyclopedia/trail-of-death/.
John Tipton was an Indian agent and one of the U.S. commissioners who negotiated the 1826 Treaty. He also worked relentlessly for removal as a U.S. senator. In 1838, he led the forced removal of the Potawatomi from Indiana to Kansas on a march known as the Trail of Death. According to the Citizens Potawatomi Nation Cultural Heritage Center:
"On the morning of September 4, 1838, a band of 859 Potawatomi, with their leaders shackled and restrained in the back of a wagon, set out on a forced march from their homeland in northern Indiana for a small reserve in present-day Kansas. To minimize the temptation for the Potawatomi to try to escape and return home, militia members burned both fields and houses as the dejected members of the wagon train departed . . . A day rarely passed that a member of the party did not die, usually a child, forcing their bereft and exhausted families to leave the bodies behind in hastily dug graves. In the end, more than forty people died during what the Potawatomi came to call the Trail of Death."

[7] Newspaper articles in this footnote submitted by Bonnie Maxwell with copies available in the IHB marker file: “Trees Half Century Old Still Stand,” Logansport Pharos-Tribune, May 14, 1921; “Lane of Trees at Deer Creek To Be Spared,” Logansport Pharos-Tribune, December 8, 1939; “Deer Creek Road Corduroy Found at Taylor Fouts Place,” Logansport Pharos-Tribune, September 1, 1939; Correspondence between Bonnie Maxwell, Joe O’Donnell, Tim Eizinger, and Lenny Farlee, submitted to IHB December 28, 2020, copy in IHB file.
Local legend purports that saplings sprang from the logs used to lay the "corduroy" base when the dirt road was planked in the 1850s, but IHB has not located primary sources from that period to confirm or disprove this claim. There is evidence that sycamores were used on this section of the road. During road construction in the 1930s, the Logansport Press reported that workers discovered sycamore logs under the road near the famous Fouts farm. It is possible that some saplings could have grown on their own, though it's unlikely they sprouted from the logs. Carroll County historian Bonnie Maxwell corresponded with several forestry experts. One Indiana forester wrote that it was more likely that the trees sprouted from seeds that took root in the freshly dug furrows next to the road. Others noted that even if the trees sprouted as the legend claims, they would not be the same trees we see today, as they are not large enough have sprouted in the early 19th century. Other theories have been posited as well, including one from a 1921 Logansport-Pharos article claiming that the trees were planted to protect the creek bank during road construction in the 1870s. There is no consensus on the origin of the sycamores.

[8] “Second State Road to Come in for Paving,” Logansport Pharos-Tribune, November 13, 1924, 1, Newspapers.com; “Lane of Trees at Deer Creek To Be Spared,” Logansport Pharos-Tribune, December 8, 1939, submitted by Bonnie Maxwell, copy available in the IHB marker file.
The state took over management of the Michigan Road in the 1920s and made it a state highway. By 1924, the state used federal funds to pave SR29, the section that passed through Carroll Count. By the 1930s, state highway officials determined that to proceed with the “berm widening program on state road 29” to improve and widen the road for safety and increased traffic, nineteen sycamores out of the 127 standing would need to be cut down. The community organized to save the trees. See footnote 9 for more.

[10] Newspaper articles in this footnote submitted by Bonnie Maxwell (unless otherwise noted) with copies available in the IHB marker file: “Historical Society Hears Research Report,” Hoosier Democrat, December 3, 1970; Letter to the Editor, Hoosier Democrat, November 25, 1971; Carroll County Comet, November 7, 1979; Dennis McCouch, “Save the Sycamores” Carroll County Comet, November 7, 1979; “Sycamore Row Petitions,” Carroll County Comet, January 16, 1980; Von Roebuck, “Carroll County Landmarks to Remain Intact,” Logansport Pharos-Tribune, December 1, 1983; “Bridge Work to Cause Deer Creek Detour,” Logansport Pharos-Tribune, June 7, 1987.
After years of work by local Carroll County organizations, in 1983, the state highways department conceded to public pressure and announced its plan to reroute SR 29 around the sycamores. Dennis McCouch of the Carroll County Historical Society led the efforts to save the trees, starting in the 1960s and continued his work through the 1970s and early 1980s. He wrote letters to the state highway department, public officials and newspapers, organized petitions, spoke out at meetings, and publicized his research on the historical significance of the area. Construction on the new route began in 1987 and required building a new bridge and rerouting Deer Creek, in addition to rerouting the highway. The Logansport Pharos-Tribune reported that residents then began using the section of the old Michigan Road to go down to the bank of the creek and fish. In 2012 the Friends of Carroll County Parks joined the INDOT Adopt-A-Highway program and in 2013 began cleaning the area and planting more sycamores along the stretch of the Old Michigan Road. In 2020 they planted larger trees and as of 2021, continue to maintain the area.