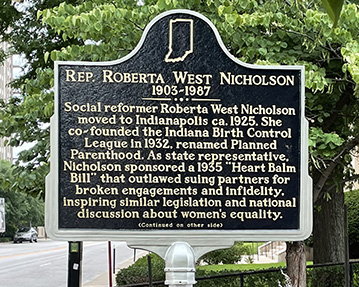 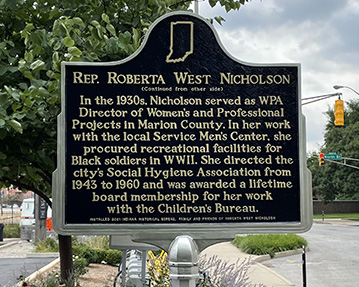 In the 1930s, Nicholson served as WPA Director of Women’s and Professional Projects in Marion County. In her work with the local Service Men’s Center, she procured recreational facilities for Black soldiers in WWII. She directed the city’s Social Hygiene Association from 1943 to 1960 and was awarded a lifetime board membership for her work with the Children’s Bureau.

At the encouragement of her mother-in-law, she worked with the Women’s Organization for National Prohibition Repeal. In 1933, Governor Paul V. McNutt appointed her to the Liquor Control Advisory Board and she was elected secretary to the state constitutional convention that ratified the 21st Amendment, repealing prohibition. Her experience and qualifications made her a natural choice for public office, and in 1934 the county chairman convinced her to run for state legislature. The only female representative in the 1935-1936 session, she made national headlines with her “Breach of Promise Bill,” also known as the “Anti-Heart Balm Bill,” and “Gold Diggers Bill.” Nicholson’s proposed bill would outlaw the ability of partners (plaintiffs were typically women) to sue fiancés who broke their engagements. The bill also outlawed suing spouses for infidelity, along with suing those who helped spouses break their vows. Nicholson felt that deriving monetary gain from emotional pain went against feminist principles and that if a man did the same to a woman he would be condemned. Her bill sought to increase women’s agency within the institution of marriage, when it had essentially been a “basic common law, that the woman was chattel and that the man, in marrying her, was saying, ‘I buy you and agree to feed and clothe you’” (“Roberta West Nicholson Didn’t Know She was an Early ‘Libber,” The Herald, March 31, 1977).

At a time of collective anxiety and changing gender roles as women increasingly entered the workforce, the bill engendered intense national debate about women’s equality. The Pittsburgh Press opined on February 5, 1935 that “The whole conception of feminine equality is destroyed every time a woman hales a man into court and collects because he decides he doesn’t want to marry her.” However, the Indianapolis Star reported on February 14 that the Michigan City, Indiana League of Women Voters opposed H.B. 138, believing it would “deprive women of their just rights. The bill passed due to Nicholson’s political savvy and the widespread support of women, inspiring similar legislation in at least eleven other states. The Indianapolis Star credited Nicholson’s bill with bringing “Spotlight, Pathe News, Time and Look magazines hurrying to Indiana by sponsoring and successfully promoting the famous heart-balm bill which has saved many a wealthy Indianian embarrassment, both social and financial by preventing breach of promise suits.”

Once her term ended, Nicholson was appointed the Marion County Director of Women’s and Professional Work for the Works Progress Administration (WPA). In her role with the WPA, Nicholson managed all jobs undertaken by women and professionals, which included bookbinding and sewing. She also helped supervise the WPA’s Writer’s Project, consisting of a group of ex-teachers and writers who compiled an Indiana history and traveler’s guide. One of Nicholson’s largest tasks involved instructing WPA seamstresses to turn out thousands of garments for victims of the Ohio River Flood in 1937. The workers were headquartered at the State Fair Grounds, where the flood victims were also transported by the Red Cross during the disaster. Nicholson noted that many of the women of the sewing project worked because their husbands had left the family as “hobos,” traveling across the country to look for work. First Lady Eleanor Roosevelt visited their WPA Project, and Nicholson felt that her approval seemed to validate the project, especially since the women “were constantly being made fun of for boondoggling and not really doing any work and just drawing down fifty dollars a month.”

In addition to women, she worked to uplift disadvantaged children, like in her work to reform the juvenile court system. For decades, she worked with the Children’s Bureau of Indianapolis, which placed children in foster homes and strove to meet the medical, social, and educational needs of marginalized children. By the 1930s, Nicholson served on the Bureau’s board and in the 1940s served as president of the board. For her dedication, the Children’s Bureau presented her with an honorary lifetime board membership, the third awarded in the organization’s 110 year history.

While World War II lifted the country out of the Depression, it magnified discrimination against African Americans. After passage of the Selective Service Act, the City of Indianapolis hoped to provide recreation for servicemen, creating the Indianapolis Servicemen’s Center, on which Nicholson served. She noted that they were able to readily procure facilities for white regiments, such as at the Traction Terminal Building, but locating them for black troops proved a struggle. Nicholson successfully fought for black servicemen to be able to utilize the exact same amenities as their white counterparts, including providing troops with a dormitory in the city because “there was no place where these young black men could sleep.” In 1952, desiring respite from the city, the tireless reformer and her husband bought a broken down house in Brown County to fix up for weekend visits. After suffering from ulcers, likely from over-exertion, Nicholson officially retired as the first director of the Indianapolis Social Hygiene Association on December 31, 1960. Nicholson passed away in 1987, leaving a positive and enduring imprint on the city’s marginalized population.

In the 1930s, Nicholson served as WPA Director of Women’s and Professional Projects in Marion County.[6] In her work with the local Service Men’s Center, she procured recreational facilities for black soldiers in WWII.[7] She directed the city’s Social Hygiene Association from 1943 to 1960[8] and was awarded a lifetime board membership for her work with the Children’s Bureau.[9]