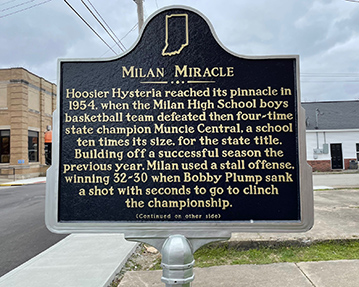 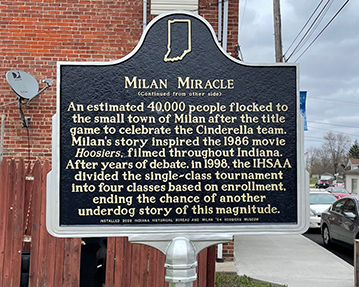 Hoosier Hysteria reached its pinnacle in 1954, when the Milan High School boys basketball team defeated then four-time state champion Muncie Central, a school ten times its size, for the state title. Building off a successful season the previous year, Milan used a stall offense, winning 32-30 when Bobby Plump sank a shot with seconds to go to clinch the championship.

An estimated 40,000 people flocked to the small town of Milan after the title game to celebrate the Cinderella team. Milan’s story inspired the 1986 movie Hoosiers, filmed throughout Indiana. After years of debate, in 1998, the IHSAA divided the single-class tournament into four classes based on enrollment, ending the chance of another underdog story of this magnitude.