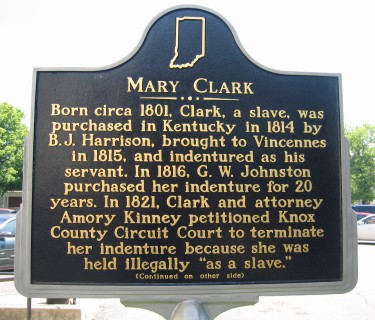 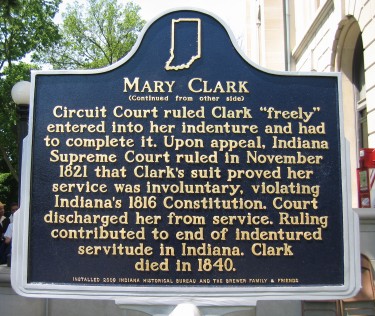 Born circa 1801, Clark, a slave, was purchased in Kentucky in 1814 by B. J. Harrison, brought to Vincennes in 1815, and indentured as his servant. In 1816, G.W. Johnston purchased her indenture for 20 years. In 1821, Clark and attorney Amory Kinney petitioned Knox County Circuit Court to terminate her indenture because she was held illegally “as a slave.”

Circuit Court ruled Clark “freely” entered into her indenture and had to complete it. Upon appeal, Indiana Supreme Court ruled in November 1821 that Clark’s suit proved her service was involuntary, violating Indiana’s 1816 Constitution. Court discharged her from service. Ruling contributed to end of indentured servitude in Indiana. Clark died in 1840.

Circuit Court ruled Clark “freely” entered into her indenture and had to complete it.[8] Upon appeal, Indiana Supreme Court ruled in November 1821 that Clark’s suit proved her service was involuntary, violating Indiana’s 1816 Constitution.[9] Court discharged her from service.[10] Ruling contributed to end of indentured servitude in Indiana.[11] Clark died in 1840.[12]

1. Clark’s exact birth date has yet to be determined. No primary sources have been located that contain this information. The estimated year of her birth comes from her burial record. “A list of interments in the public Burial ground 1840,” Borough of Vincennes Minute Book 7, Vincennes Clerk/Treasurer’s Office Vault, 378, photocopy (B070795).  This record gives Mary Clark’s age as 39 at the time of her death in 1840.

The similarities of the handwritten “I” and “J” have caused much confusion about Benjamin Harrison’s middle initial. The Indiana Historical Bureau has used family history and genealogy records to confirm Harrison’s middle name as “Johnston.”

Will records also connect the Harrison and Johnston families. The will of Dorothy Johnston, Mary Ann Harrison’s mother, probated June 5, 1792, listed Mary Ann’s husband, John Harrison (Benjamin’s father), as one of the executors of this will. John Harrison also became guardian of Ann Chew Johnston, his wife’s younger sister.

3. Mary Clark a woman of Color v. G W Johnston, May 7, 1821 (Knox County, Indiana Circuit Court), http://www.in.gov/judiciary/citc/lessons/blackford/petition.pdf (accessed December 11, 2007) (B070592). Harrison stated the following regarding his acquisition of Mary, “Whereas I Benjamin J. Harrison in the Year one thousand eight hundred and fourteen, purchased a Negro woman called and named Mary, in the State of Kentucky as a slave And in the month of January A.D. One Thousand eight hundred fifteen brought her to the Indiana Territory and took upon and from her an Indenture of servitude for thirty years.”

4. General was his given first name and not a title.

For a good biographical overview of General Washington Johnston’s public service see the entry in A Biographical Directory of the Indiana General Assembly, eds. Rebecca Shepherd, et al. (Indianapolis, 1980), 1: 209 (B070555). Johnston, born in Virginia, moved to Indiana circa 1793. He became involved with the territorial government a decade later. Johnston served as the clerk of the Territorial House of Representatives (1805-1806), a member of the Territorial House of Representatives (1807-1811), and territorial attorney general (1811-1814) amongst other positions. What makes Johnston’s purchase of Mary’s indenture interesting is that he is credited with producing a report that helped pass a bill in the Territorial House of Representatives that forbade executing these indentures; this bill failed to pass the Legislative Council. Johnston’s report, the progress of the bill, and a fuller treatment of Johnston’s public and private life can be found in Journals of the General Assembly of Indiana Territory, 1805-1815, eds. Gayle Thornbrough and Dorothy Riker (Indianapolis, 1950), 232-39, 987-91 (B070616).  Journals of the General Assembly is also available online at http://indiamond6.ulib.iupui.edu/u?/ISC,8019 (accessed January 28, 2008).

5. Mary Clark a woman of Color v. G W Johnston, May 7, 1821 (Knox County, Indiana Circuit Court), http://www.in.gov/judiciary/citc/lessons/blackford/petition.pdf (accessed December 11, 2007) (B070592). On October 24, 1816, four months after the adoption of Indiana’s Constitution, Harrison cancelled Clark’s indenture.  General Washington Johnston, the same man who submitted the anti-slavery report to the Indiana Territory’s House in 1808, then paid Harrison $350, and Mary bound herself to Johnston as an indentured servant and house maid for twenty years.

While the order and process of this transaction is confusing, these were the facts as presented to the Knox County Circuit Court in 1821.  Under territorial law, Harrison could have sold Mary’s indenture to Johnston outright without freeing her first. Laws of the Indiana Territory 1801-1809, ed. Philbrick, 540-41 (B070619).  “An Act concerning Executions” passed on September 17, 1807.  The law stated, “That the time of service of such negroes or mulattoes, may be sold on execution against the master in the same manner as personal estate, immediately from which sale, the said negroes or mulattoes, shall serve the purchaser or purchasers for the residue of their time of service.”

Indiana’s 1816 Constitution explicitly prohibited “involuntary servitude.” As a result, Harrison and Johnston may have determined that it was necessary for Mary to indenture herself “freely” to Johnston, and this transaction created that appearance. Constitution of 1816 (accessed January 23, 2008) (B070726).

6. Kinney was a Congregational clergyman’s son from New England.  Kinney moved to Indiana in 1819, and served as Polly Strong’s attorney in the case State v. Lassalle case shortly thereafter. The Indiana Supreme Court’s ruling in this case held that Indiana’s 1816 Constitution made slavery in Indiana illegal. “Bound for Freedom: the Case of Polly Strong,” http://www.in.gov/judiciary/citc/ special/bound-for-freedom/index.html (accessed January 3, 2008) (B070645).  This Indiana Supreme Court site has all of the key primary sources in this case, along with transcripts, available for download.

8. Ibid. According to testimony given to the Knox County Circuit Court, Mary entered her indenture with Johnston of her “own free will & accord.”

9. Case of Mary Clark, a Woman of Color, 1 Blackford (1821), http://www.in.gov/judiciary/citc/lessons/railroad/mary-clark.pdf (accessed June 10, 2008) (B070593). The Indiana Supreme Court explained its ruling thusly: “While the appellant remained in the service of the oblige without complaint, the law presumes that her service was voluntarily performed; but her application to the Circuit Court to be discharged from the custody of her master, establishes the fact that she is willing to serve no longer; and, while this state of the will appears, the law can not, by any possibility of intendment, presume her service is voluntary.” It concludes, “The appellant in this case is of legal age to regulate her own conduct; she has a right to the exercise of volition; and, having declared her will in respect to the resent service, the law has no intendment that can contradict that declaration. We must take the fact as it appears, and declare the law accordingly. The fact then is, that the appellant is in a state of involuntary servitude; and we are bound by the constitution, the supreme law of the land, to discharge her therefrom.”

Constitution of 1816, (accessed January 23, 2008) (B070726).  Once this URL is accessed, Article XI can be found by clicking the corresponding link at the bottom of the page. Article XI, in the seventh section, states, “There shall be neither slavery nor involuntary servitude in this state, otherwise than for the punishment of crimes, whereof the party shall have been duly convicted. Nor shall any indenture of any negro or mulatto hereafter made, and executed out of the bounds of this state be of any validity within the state.”

11. Emma Lou Thornbrough, The Negro in Indiana: A Study of a Minority (Indianapolis, 1957), 23-30 (B070561). Thornbrough notes that in the months that followed the Supreme Court’s decision, several other individuals who served as indentured servants were freed after filing suits in Knox County.

Clark’s case can be viewed in a larger context concerning the development of free labor in the United States. According to Robert J. Steinfeld, “the case marked the moment in American legal culture when the category indented service began finally to collapse into the category slavery, both now classified merely as forms of involuntary servitude.” “At the heart of the new understanding was the idea, first fully articulated in Mary Clark’s case, that labor became involuntary the moment a laborer decided to depart and was not permitted to do so—whatever previous agreement she may have made.” Robert J. Steinfeld, The Invention of Free Labor: The Employment Relation in English and American Law and Culture, 1350-1870, (Chapel Hill N.C., 1991), 147 (B071253).