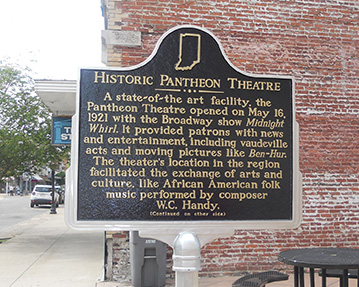 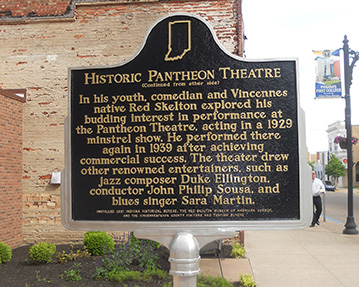 Learn more about Red Skelton and the work and  influence of his first wife Edna Stillwell on the Indiana History Blog.

A state-of-the art facility, the Pantheon Theatre opened on May 16, 1921 with the Broadway show Midnight Whirl. It provided patrons with news and entertainment, including vaudeville acts and moving pictures like Ben-Hur. The theater’s location in the region facilitated the exchange of arts and culture, like African American folk music performed by composer W.C. Handy.

In his youth, comedian and Vincennes native Red Skelton explored his budding interest in performance at the Pantheon Theatre, acting in a 1929 minstrel show. He performed there again in 1939 after achieving commercial success. The theater drew other renowned entertainers, such as jazz composer Duke Ellington, conductor John Philip Sousa, and blues singer Sara Martin.

Arts and Culture; Buildings and Architecture