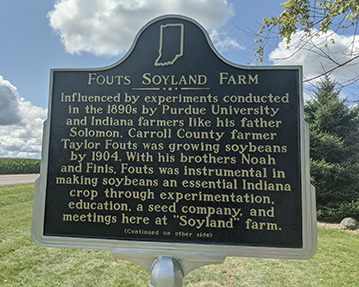 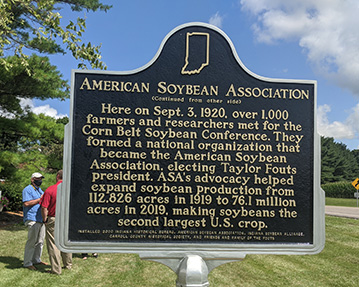 Influenced by experiments conducted in the 1890s by Purdue University and Indiana farmers like his father Solomon, Carroll County farmer Taylor Fouts was growing soybeans by 1904. With his brothers Noah and Finis, Fouts was instrumental in making soybeans an essential Indiana crop through experimentation, education, a seed company, and meetings here at “Soyland” farm.

Influenced by experiments conducted in the 1890s by Purdue University[1] and Indiana farmers like his father Solomon,[2] Carroll County farmer Taylor Fouts was growing soybeans by 1904.[3] With his brothers Noah and Finis,[4] Fouts was instrumental in making soybeans an essential Indiana crop through experimentation,[5] education,[6] a seed company,[7] and meetings here at “Soyland” farm.[8]

In 1894, the Indiana State Sentinel reported that the Purdue University Agricultural experiment station issues a circular with information on the “Soy or Soja bean.” In 1899, several Indiana newspapers ran an article by William Caroll Latta, Purdue University School of Agriculture faculty, about soybean experiments at the university and usage on Indiana farms. He called the soybean “comparatively new and promising” and stated that it had been “successfully grown in different parts of the state.” Latta recommended to Indiana farmers that soybeans could be grown wherever corn was productive (and in with standing corn) and that it could be grown in place of clover. Latta explained that it could be grown for animal feed, hay or silage, and seed. It could be drilled in with a wheat driller. Taylor Fouts wrote for the Soybean Digest: “It was during Purdue years that this farmer became convinced that the whole Cornbelt needed soybeans and would like them for keeps.” Fouts graduated from Purdue in 1902.

In a 1944 Soybean Digest article, Taylor Fouts wrote: “About 1896 or 1898 my father was recipient of free seeds from the USDA. These included two varieties of cowpeas and two varieties of soybeans. These were drilled across a cornfield, one row each, and attracted considerable attention by the end of the season, particularly the soybeans because of their erect growth and promising seed production.” Primary sources confirm that several Indiana farmers received these seeds.

In 1922, Taylor Fouts authored an article for the Prairie Farmer about his experience growing soybeans. He wrote: “Our experience with soybeans, on what we now call Soyland, covers an unbroken series of years beginning with 1904. We began when the crop was practically unknown in the Corn Belt, and have harvested 18 crops.” Taylor Fouts wrote again in 1944 for the Soybean Digest: “So in the spring of 1904 seed was collected from the Indiana Experiment Station and Soybean Smith, enough to plant 4 acre, 1 acre each of Ogemaw, Ito San, Early Brown and Hollybrook.” He was referencing Isaac (Soybean) Smith. He wrote that his 1904 crop mostly failed because of mistakes in his planting due to inexperience and because of heavy rain, but he could tell the crop had the potential to be productive from the plants that did grow successfully. Using the seeds from the small number of plants that grew in 1904, Taylor Fouts made another trial in 1905 and planted more and more each year.

Noah and Finis Fouts followed their brother into the soybean growing business. Taylor wrote for the Soybean Digest: “By 1908 we ventured drilling soybeans with the corn, so that our western lambs to be purchased in September would have a more balanced ration. My two older brothers took readily to this plan and thereafter grew soybeans as a habit.” By 1913, Noah was advertising Hollybrook seeds for sale at his farm. That same year, the Ohio Farmer praised Taylor and Noah Fouts for their time and cost saving methods of hogging down corn with soybeans. [Hogging down referred to the method of allowing livestock to harvest corn and soybeans that had been planted together for that purpose. See footnote 5.] by 1914, the brothers’ seed company, operated out of their three farms, was successful enough that they needed to centralize distribution. According to Taylor Fouts writing for the Soybean Digest, the brothers purchased “an old pioneer type elevator” in Camden. They “remodeled and equipped [it] with recleaning and grading mill and elevators for preparing and storage of our seeds.” Taylor wrote: “This was perhaps the first soybean elevator devoted exclusively to the handling and shipping of soybeans in the U. S.”

Taylor Fouts began experimenting with different soybeans on his farm in 1904 (see footnote 3 for information on varieties). By 1907, Taylor Fouts had narrowed his soybean production from four to two varieties: Ito San and Hollybrook. That year he produced 200 bushels of seed beans. By 1908, he was perfecting a technique of growing soybeans in with corn so that livestock could feed off it when ready to harvest. This had the multiple advantages of [1] creating acreage that did not need to be harvested by farmers because the animals would eat it, [2], fattening up the animals with a high protein feed that brought higher prices for the animals at market, and [2] adding nitrogen to the soil from the soybeans which would not have happened from corn only.

The Fouts also worked with Purdue University, experimenting to improve soybean production. In 1918, the Prairie Farmer quoted Taylor Fouts and cited three years of experiments done on the Fouts Brothers farm cooperatively with the Indiana Experiment Station in response to a reader question about whether soybeans would reduce corn yields. The experiments showed that while corn was reduced by about three bushels, the loss was countered with soybeans in the amount of 8-10 bushels of feed. Furthermore, the soybeans enhanced the soil for the next year. Taylor Fouts stated: “I would like to say also that I have always secured larger crops of corn following corn and soybeans than I have following corn alone.” In 1924, The Logansport Pharos-Tribune reported that “a close co-operation between the Fouts brothers and Purdue university has been maintained for several years.” They contributed their practical knowledge to experiments at the Purdue agricultural stations. All three of the brothers’ farms served as sites for demonstrations under the auspices of Purdue attended by hundreds of farmers. The newspaper also reported that the brothers have been very helpful to other farmers wanting to learn about soybeans from their experience.

After he began planting soybeans and continuing throughout his career, Taylor Fouts worked to educate farmers on how to grow and profit from soybeans. As early was 1905, he spoke at a Purdue University Farmer’s Institute in Carroll County. All three of the Fouts brothers spent many hours answering other farmers questions and distributing educational literature. They also helped to educate farmers through their work experimenting in cooperation with Purdue University and sharing the results of those experiements. See footnote 5.

See footnote four for information on founding the Fouts Bros. Seed Company. A 1921 article reported that Indiana was the leading soybean producing stated with over 200,000 acres because of “cooperation, correlation and community enterprise.” That year, the Fouts Brothers were growing 250 acres of soybeans on their three farms. 100 acreas went to their direct seed trade to meet the demand of Indiana farmers. The article credits the Fouts Brothers for taking soybeans “from practical oblivion and obscurity” to become “one of the leading cash crops of eastern and central Indiana.” Over the year 1923, the Fouts brothers “distributed more than eight thousand bushels of soy bean seed, shipping to all but three states of the union.”

Taylor Fouts wrote for Soybean Digest: “A soybean day in September was sponsored by the Purdue agricultural extension department and our county agent, and proved quite a help in creating interest in the crop.” A few days later two prominent Illinois farmers came to the farm and “their visit in 1910 inspired the marvelous development of soybean production in Illinois.” He continued: “Another soybean day was held at Fouts Bros. Farms in 1916 – more acres, varieties and experiences, and more folks to see and talk. By this time there were regional meetings of this kind and interest was quite general.” Taylor named his farm Soyland in 1918. Soyland hosted regular talks through the 1920s, often hosted by the Purdue University agricultural extension.

Taylor Fouts wrote: “It seemed an opportune time to form a definite organization. At that time the name, “National Soybean Growers Association,” was appropriate, and that name was agreed upon. However, in a short time the industrial aspects of the potential crop indicated a more comprehensive name, and the American Soybean Association was adopted and has been most satisfactory.” Fouts was elected president of the organization at the same meeting. By 1924, the leaders of the National Soybean Growers Association recognized that they needed a more “definite organization with definite aims and clear cut policy.” No longer was the soybean an experiement. It was an important crop with many applications and the organization should reflect that, so they created a committee to draw up a constitution and bylaws. National Soybean Growers Association became the American Soybean Association at its sixth meeting in 1925 when a constitution and bylaws were adopted. All three Fouts brothers presented at this meeting.

[11] Department of Commerce, Bureau of the Census “Table 58 – Miscellaneous Beans,” in Fourteenth Census of the United States Taken in the Year 1920, Vol. 5, Agriculture, accessed Cornell University.