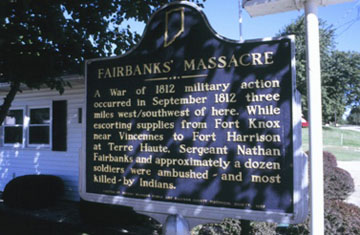 A War of 1812 military action occurred in September 1812 three miles west/southwest of here. While escorting supplies from Fort Knox near Vincennes to Fort Harrison at Terre Haute, Sergeant Nathan Fairbanks and approximately a dozen soldiers were ambushed -- and most killed -- by Indians.