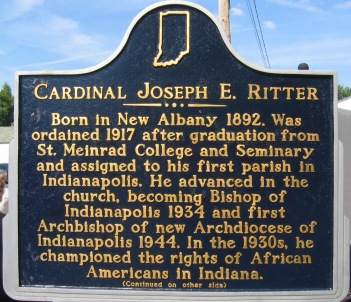 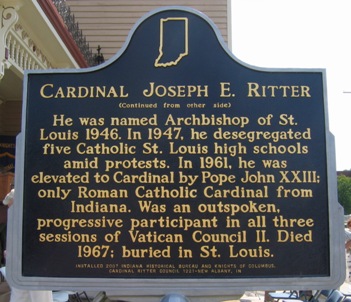 Born in New Albany 1892. Was ordained 1917 after graduation from St. Meinrad College and Seminary and assigned to his first parish in Indianapolis. He advanced in the church, becoming Bishop of Indianapolis 1934 and first Archbishop of new Archdiocese of Indianapolis 1944. In the 1930s, he championed the rights of African Americans in Indiana.

He was named Archbishop of St. Louis 1946. In 1947, he desegregated five Catholic St. Louis high schools amid protests. In 1961, he was elevated to Cardinal by Pope John XXIII; only Roman Catholic Cardinal from Indiana. Was an outspoken, progressive participant in all three sessions of Vatican Council II. Died 1967; buried in St. Louis.

Born in New Albany 1892. (2) Was ordained 1917 after graduation from St. Meinrad College and Seminary (3) and assigned to his first parish in Indianapolis. (4) He advanced in the church, (5) becoming Bishop of Indianapolis 1934 (6) and first Archbishop of new Archdiocese of Indianapolis 1944. (7) In the 1930s, he championed the rights of African Americans in Indiana. (8)

The formal term of address in the Roman Catholic Church is Joseph Cardinal Ritter.

"He and a friend Herman Emlinger, decided, when they were students in the seventh grade, that their vocations were clear. They went to the assistant pastor at St. Mary's and told him they wanted to become priests. He advised them to finish grammar school and then enter St. Meinrad's seminary." This source is a wonderful reminiscence by two New Albany residents about Ritter as a boy "playing priest." Indiana Catholic and Record, March 31, 1933 (B050783).

On January 3, 1930, Ritter was nominated to the office of diocesan consultor. Letter, Most Reverend Joseph Chartrand to Ritter, January 3, 1930, Box 1, Joseph Elmer Ritter Collection, Archives Office, Archdiocese of Indianapolis (B050774).

The Archdiocese of Indianapolis was established the same day. Ibid.

A possible explanation may be that in 1937, the Catholic Interracial Council in New York passed a resolution that all children, regardless of race or economic situation, have a God-given right to a Catholic education. It was during this same time that Ritter formed a committee to investigate and study the social needs of African Americans in Indianapolis. Indiana Catholic and Record, October 1, 8, 1937 (B050510) (B050511).

Father John LaFarge, SJ, together with George Hunton, founded the New York Catholic Interracial Council movement in 1934. Apart from the leadership given by these priests and hierarchy, it was the voice of the laymen organized in Catholic Interracial Council movements that formed the strongest concerted effort within the Church to implement racial equality. Traxler, Sister Margaret Ellen, "American Catholics and Negroes, " Phylon, V. 30, 4 (Atlanta, 1969), 355-66.

(10) In September 1947, Ritter desegregated five Catholic St. Louis high schools; as a result, the City Board of Education immediately advocated the abolition of segregation in St. Louis public schools. Indiana Catholic and Record, September 19, 1947 (B051033).

Ritter threatened those who fought desegregation with excommunication from the Catholic Church, making it easier for him to implement change and to eliminate opposition. Indiana Catholic and Record, September 26, 1947 (B050524).

(11) On January 19, 1961, Ritter was elevated to Cardinal by Pope John XXIII in St. Peter's Basilica, Vatican City, Rome, Italy. The Criterion, January 20, 1961 (B050506). "Four major accomplishments of Cardinal Ritter's career were singled out: (1) his sending of priests of the St. Louis Archdiocese to work in the South American mission field; (2) his early integration of parochial schools; (3) his work in promoting the participation of the laity in the Apostolate; and (4) his outstanding service as the head of the Commission for the Liturgy."

(12) He was the first and to date is the only Roman Catholic Cardinal from Indiana. E-mail, Karen Oddi, Associate Archivist, Archives Office, Archdiocese of Indianapolis to IHB, November 15, 2006 (B051042).

Rynne provided the following passage: "Seeing the way the wind had been blowing during the past few days, with determined expressions of opinion by such eminent figures as Cardinals Frings of Cologne, Doepfner of Munich, Dio of Tokyo, Leger of Montreal, Ritter of St. Louis, and Myer of Chicago, as well as African bishops almost a body, in favor of changes of all kinds, particularly regarding the use of vernacular in the mass, the restoration of communion under both kinds on special occasions, and so on, Cardinal Ottavani rose to ask, "Are these fathers planning a revolution." Xavier Rynne, The Second Session, The Debates and Decrees of Vatican Council II, September 29 to December 4, 1963 (New York, 1964), 72, 181 (B050534).

Rynne also noted: "Two important interventions on Thursday emphasized the importance of an even greater biblical approach and of theology of the Word, relatively new ideas in recent Catholic theology. The first by Cardinal Ritter, Archbishop of St. Louis—the second American to speak in the session." Ibid., 72.

Rynne wrote further: "Though the Council meeting on the following day, November 7th, was marked by the important intervention of Cardinal Ritter of St. Louis . . . ." Ibid., 181.

During the last session there was a major dispute, and Ritter was right in the middle: "If the Americans were faulty in not being sufficiently vigilant, they made up for this defect by their reaction, which was immediate, violent, spontaneous, and for once instinctively well organized." Xavier Rynne, The Third Session, The Debates and Decrees of Vatican Council II, September 14- November 21, 1964 (New York, 1964, 1965), 64-65, 73, 149, 230; quotation on 259 (B050528).

In 2006, Andrew Steffen, Indianapolis attorney gave a one million dollar scholarship endowment to Marian College, Indianapolis, to increase diversity at the college, in honor of the legacy of Cardinal Ritter. The Criterion Online Edition, February 24, 2006, http://www.archindy.org/criterion/local/2006/02-24/ritter.html (accessed June 19, 2006) (B050486).