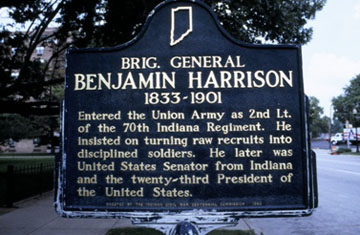 ​ Visit the Indiana History Blog to learn about his wife, Caroline Scott Harrison, and her influence in the White House.

Entered the Union Army as 2nd Lt. of the 70th Indiana Regiment. He insisted on turning raw recruits into disciplined soldiers. He later was United States Senator from Indiana and the twenty-third President of the United States.