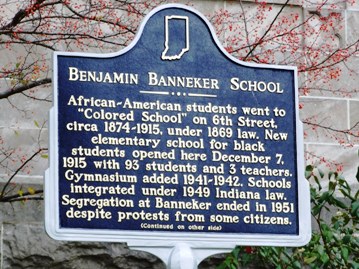 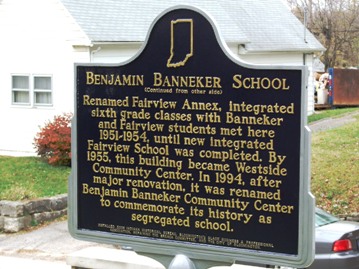 (1) This school was named after Benjamin Banneker, a free black man born 1731 in Maryland. Banneker published scientific almanacs and was one of the surveyors who platted Washington, D.C. Silvio A. Bedini, The Life of Benjamin Banneker (New York: 1972), xiii (B060759).

Reasons for the requested name change include: Washington's greater notoriety, his stance on vocational training, his recent death, his reputation as "the greatest negro of America, " and the ease with which the name could be changed. Bloomington Evening World, December 2, 1915 (B060713).

Ultimately this petition to change the school's name was not successful and the building kept the name of Benjamin Banneker until 1951.

Benjamin Banneker School was not completed when the school year started in 1915. As a result, African American children attended school at the old armory building at the corner of College Avenue and Third Street. Bloomington Evening World, September 13, 1915 (B060561).

(5) In 1941, the City of Bloomington and the National Youth Administration (N.Y.A.), a federal agency created during President Franklin Roosevelt's New Deal, paid for the construction of a gymnasium for the school. Memos, Office of H. Victor Carman, City Civil Engineer, City of Bloomington, September 6, 1941 and October 11, 1941 (B061246).

(6) Laws of Indiana, 1949, 604-607 (B060617). This law prohibited the construction of new segregated schools. The law required that schools discontinue enrollment on the basis of race, creed, or color of students entering kindergartens, first grades of elementary schools, and first year departments of senior high or junior high schools by the September, 1949 school year. First year enrollments could be delayed until 1950 for elementary schools, 1951 for junior high schools, and 1954 for high schools if equipment and facilities were not adequate to accommodate the influx of students.

On July 10, 1951, the Board of School Trustees decided to have some white students from nearby Fairview School transferred to Banneker. Bloomington City School Board Minutes, July 10, 1951 (B060668).