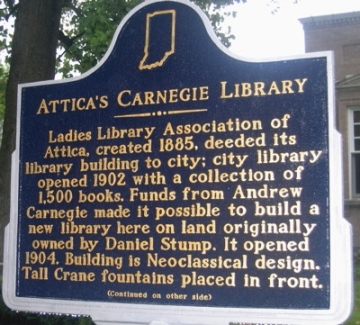 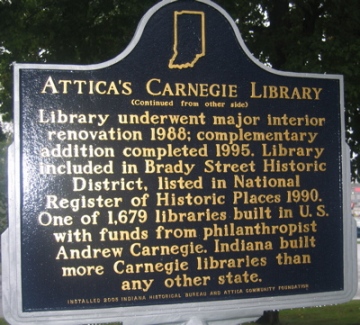 Ladies Library Association of Attica, created 1885, deeded its library building to city; city library opened 1902 with a collection of 1, 500 books. Funds from Andrew Carnegie made it possible to build a new library here on land originally owned by Daniel Stump. It opened 1904. Building is Neoclassical design. Tall Crane fountains placed in front.

Ladies Library Association of Attica, created 1885, (1) deeded its library building to city;(2) city library opened 1902 with a collection of 1, 500 books.(3) Funds from Andrew Carnegie made it possible to build a new library here on land originally owned by Daniel Stump.(4) It opened 1904.(5) Building is Neoclassical design; Tall Crane fountains placed in front.(6)

4. City Council Proceedings, January 6, 1903; Attica Ledger, January 22, 1903. The building site for the Carnegie Library was Washington Park, land that was donated for public use in 1825 by Daniel Stump. City Council Proceedings, January 6, 1903 ”council agrees to donate land for library at Washington Park or McDonald Park, and provide support for the Library by tax levy; Minutes, Attica Library Board, January 15, 1903 ”board votes to recommend Washington Park to City Council as site for new library; Attica Ledger, January 22, 1903” city council passes resolution to build new library building given by Andrew Carnegie on lots known as Washington Park; Ordinances of the City of Attica, Fountain County, Indiana, From its Incorporation in 1866 to January 1, 1894, p. 57 ”Attica platted in 1825 by Daniel Stump, Washington Park designated by Stump as "Public Square."

6. Fountain County Interim Report (Indianapolis, 1988), 14; Lafayette Journal and Courier, January 13, 1996; Lafayette Journal & Courier, July 30, 1996 indicates, according to librarian, Priscilla Davis: "The fountains have been a part of the library since it was built in 1904." Williamsport Review Republican, August 8, 1996, also reports Davis saying "that the fountains were a part of the original library project when it was built in 1904." Proceedings, Attica City Council, September 19, 1904, instructs superintendent to install pipe and sewerage necessary for two fountains in the Library Park; December 26, 1904 lists bill for freight on Fountains; January 6, 1905 lists bill for Fountains. According to the Fountain County Neighbor, June 11, 1996, "Preservationists determined Attica's fountains were Tall Cranes, which features [sic] three cranes at the base and three, tiered bowls."

7. Wabash Valley News, January 5, 1988 indicates that "Restoration began three years ago under a ten year plan. . . . The library is closed now for interior work to be done." Attica Star Tribune, January 8, 1988 states: "it was decided two years ago to restore the 1908 Carnegie library. Repairing the roof was a priority. Then it was decided to look at the entire structure."

8. "Ground was broken in late 1994 and construction was completed in late 1995." Lafayette Journal & Courier, January 13, 1996. The article states: "a just-completed addition to the east has nearly tripled space, " and "books were moved into the new addition over the holidays." It continues, "Although the new section is in use, finishing touches remain. The date for a grand opening will be announced soon." Williamsport Review Republican, January 18, 1996 states: "The Attica Public Library has reopened its doors after being closed for a week to move into the new addition that more than doubles the space and adds many new areas to the facility."