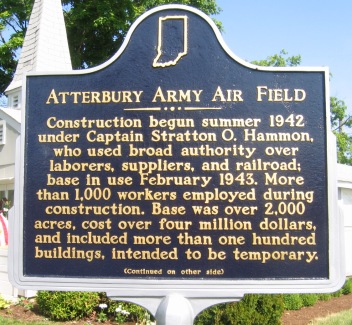 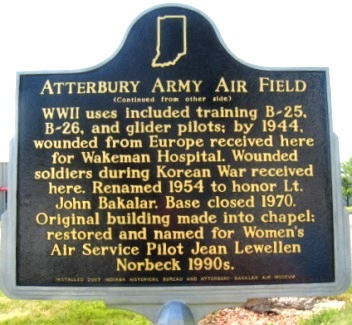 Visit the Indiana History Blog to learn how POW's at Camp Atterbury contributed to agricultural needs during WWII.

Construction begun summer 1942 under Captain Stratton O. Hammon, who used broad authority over laborers, suppliers, and railroad; base in use February 1943. More than 1,000 workers employed during construction. Base was over 2,000 acres, cost over four million dollars, and included more than one hundred buildings, intended to be temporary.

Construction begun summer 1942(2) under Captain Stratton O. Hammon,(3) who used broad authority over laborers, suppliers, and railroad;(4) base in use February 1943.(5) More than 1,000 workers employed during construction.(6) Base was over 2, 000 acres, cost over four million dollars, and included more than one hundred buildings, intended to be temporary.(7)

(1)In 1941 Congress passed spending bills that would allow for rapid construction of military bases throughout the country. Lou Thole, "Building an Airfield: Atterbury Army Air Field, Columbus, IN, " in Thole, Forgotten Fields of America, World War II Bases and Training THEN and Now(Missoula, Mont., 1996), www.71stsos.com/buildingatterburyfield.html (accessed January 20, 2005) (B00216).

(3)"Engineers Get Set" (B00065). At the time Hammons took over the job of building the air base, he was 38 years old and had been an architect for 22 years. In December, with base nearly complete, promoted from captain to major and oversaw building of three more army fields, a general hospital, quartermaster depot, medical depot, and other structures. Stratton Hammon, "The Impact of World War II on a Citizen Soldier, " speech, n.d., www.indianamilitary.org (accessed March 17, 2005) (B00224).

In order to finish base on time, Hammon needed a railroad spur to the base to ship in ten carloads of cement per day. Originally Pennsylvania Railroad refused to install spur until other military obligations were met. Hammon ignored the military chain of command and appealed directly to the head of the War Production Board. Two days later, the spur was being built. Also, according to Hammon, the presence of labor union organizers was slowing production.

Hammon claimed to have phoned the draft board in Indianapolis asking why the union leaders on his base had not been drafted. According to Hammon, those organizers soon disappeared from the base. Hammon, "Impact of World War II" (B00224).

Crews at times poured concrete all night long. There is also a reference in the following article to the black workers living in cabins on the bases while the while workers were living in a separate, recently vacated farm on the base. "Work Keeps Air Base Boys Warm, " Columbus Evening Republican, October 28, 1942 (B00571). For more on the sometimes drastic measures Hammon took to finish the base on time, see his "Daily Work Record" (B00221).

(9)"Local Atterbury AAF Activity" (B00580). At one point during the war, Wakeman was largest hospital in the Fifth Service Command. The hospital ultimately housed 85, 000 patients. For more on Wakeman Hospital, see Riker, Hoosier Training Ground, 42-68 (B00035).

(13) The building that became the chapel was one of the original buildings constructed in 1942. It served as a barracks until 1951 or 1952, when it was converted into a chapel. Atterbury-Bakalar Air Museum (Columbus, Ind.), http://www.atterburybakalarairmuseum.org/prod04.htm (accessed January 10, 2005).

Norbeck (1912-1944), a Columbus native, was one of 38 women pilots killed in service during World War II and the only woman from Bartholomew County killed in the line of duty. Stationed in Sumter, South Carolina, as a test pilot for planes that had been marked unsafe, on October 16, 1944, she was killed when the plane she was piloting crashed. Wynita Worley, "Chapel Honors Woman Pilot, " Columbus Republic, May 30, 1998 (B00698).

In 1995, the local Aviation Board began a restoration of the former air base. During the process, the board determined that one of the few remaining buildings should be dedicated to a war hero. Norbeck was selected for the honor, and the restored chapel was dedicated to her on May 29, 1998. Ibid (B00698).