A Gateway to Freedom 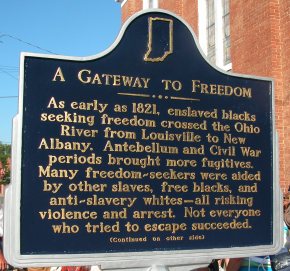 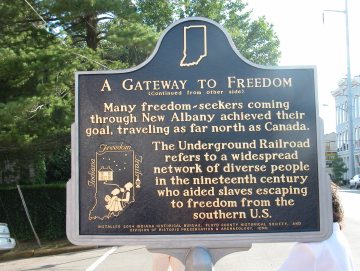 ID# : 22.2004.1
Further information and primary sources available for researchers in this guide to the annotated text.

As early as 1821, enslaved blacks seeking freedom crossed the Ohio River from Louisville to New Albany. Antebellum and Civil War periods brought more fugitives. Many freedom-seekers were aided by other slaves, free blacks, and anti-slavery whites - all risking violence and arrest. Not everyone who tried to escape succeeded.

Many freedom-seekers coming through New Albany achieved their goal, traveling as far north as Canada. The Underground Railroad refers to a widespread network of diverse people in the nineteenth century who aided slaves escaping to freedom from the southern U.S.

As early as 1821, enslaved blacks seeking freedom crossed the Ohio River from Louisville to New Albany.(1) Antebellum and Civil War periods brought more fugitives.(2) Many freedom-seekers were aided by other slaves, free blacks, and anti-slavery whites—all risking violence and arrest.(3) Not everyone who tried to escape succeeded.(4)

Many freedom-seekers coming through New Albany achieved their goal, traveling as far north as Canada.(5) The Underground Railroad refers to a widespread network of diverse people in the nineteenth century who aided slaves escaping to freedom from the southern U.S.

New Albany was founded and lots advertised for sale in 1813. It was incorporated as a town in 1836 and as a city in 1839. By 1850, it was the largest city in Indiana; by 1860, it had the one of the largest percentages—almost 5 percent—of black to white population in Indiana. Historic New Albany marker file, Indiana Historical Bureau; John D. Barnhart and Donald F. Carmony, Indiana: From Frontier to Industrial Commonwealth, 4 vols. (New York, 1954), 1:419; Emma Lou Thornbrough, The Negro in Indiana (Indianapolis, 1957), 45-46; Louisville Weekly Journal, December 27, 1841.

Indiana's 1816 Constitution prohibited slavery. Hubert Hawkins, comp., Indiana's Road to Statehood (Indianapolis, 1969), 89. Indiana's 1851 Constitution prohibited slavery, but Article Thirteen "imposed certain civil disabilities on the colored race relative to education, immigration into the State, the negotiation and consummation of contracts, ownership of property, and the right to testify in courts of justice." Even after the Thirteenth Amendment of the U.S. Constitution passed, Article Thirteen "remained, present but inoperative, as a part of the [Indiana] Constitution" until 1881. Charles Kettleborough, Constitution Making in Indiana, 3 vols. (Indianapolis, 1916), 1:128, 130-31, 231, 304. The New Albany Daily Ledger, November 10, 1862 expresses the opinion that Article Thirteen should be enforced. The New Albany Daily Ledger newspaper was pro-slavery, and John B. Norman, an editor, was "a strong foe of abolitionism and notorious for his constant degradation of African Americans." Pamela R. Peters, The Underground Railroad in Floyd County (Jefferson, N.C., 2001), 14, 16-17.

(2)New Albany Daily Ledger, December 18, 1862; Thornbrough, Negro in Indiana, 41-44, 184-85; Hudson, 50-51; Peters, 22-23. Although a slave state, Kentucky remained officially neutral and remained in the Union during the Civil War. President Abraham Lincoln's Emancipation Proclamation of 1863, applied to only those slaves held in states in rebellion against the Union. "Overview of the Civil War in Kentucky, " (accessed September 17, 2003), . Slavery was abolished in the U.S., December 18, 1865, when the Thirteenth Amendment was ratified. "The Constitution of the United States of America, " accessed September 17, 2003.

(3)Louisville Daily Journal, December 24, 1853, April 6, 1855; Louisville Daily Courier, September 7, September 8, September 10, 1855; Thornbrough, Negro in Indiana, 41-47; Peters, 9, 81-83. Some free blacks purchased freedom for some slaves. "My children are Just Tied Down Here, " accessed September 10, 2003). This is an interview of Washington Spradling, by American Freedmen's Inquiry Commission, 1863. Louisville and New Albany had free black communities. Thornbrough, Negro in Indiana, 41-43; Hudson, 168, 170. Louisville blacks, both free and slave, because of their jobs as draymen, hackmen, wagoners, etc., traveled regularly across the Ohio River. New Albany Daily Ledger, January 18, 1861; Peters, 7, 8, 90-91. "Slave owners within a city were not able to exercise as much control over their slaves as in the countryside where slaves lived together in comparative isolation. For example, Louisville slaves were scattered throughout the city, generally living in small houses or outbuildings behind their owners' houses. Slaves tended therefore to socialize with free blacks on the streets, in the black churches, in the homes of free blacks or in taverns." Peters, 7.

The influx of escaping slaves into New Albany in the first half of the 1860s brought about threats, violence, and arrests. New Albany Daily Ledger, February 20, 1856, August 7, 8, 1860, July 23, December 12, 1862; Thornbrough, Negro in Indiana, 184-86. In New Albany, on July 22, 1862, the worst race riot of the war years took place. During thirty hours of rioting, acts of violence and vandalism were committed against blacks. Patrols of soldiers were brought in to quell the riot. Thornbrough, Negro in Indiana, 185-86.

Another factor was the Compromise of 1850, including the Fugitive Slave Law passed by Congress September 18, 1850. "Although public opinion was generally favorable to compromise, the Fugitive Slave measure was extremely objectionable to many, " Emma Lou Thornbrough, Indiana in the Civil War Era (Indianapolis, 1965), 47-48. In the Indiana Constitutional Convention of 1850-1851, both parties supported the Compromise of 1850 stating that it was the duty of all citizens to carry out the conditions of the Compromise. (Ibid., 49-50). The Fugitive Slave Law of 1850 made the federal government responsible for tracking down and apprehending fugitive slaves and returning them to the South. It allowed the federal government to deputize citizens, against their will and force them to take part in seizing fugitive slaves. See "Africans in America/Part 4/Eric Foner on the Fugitive Slave Act," accessed October 20, 2003).