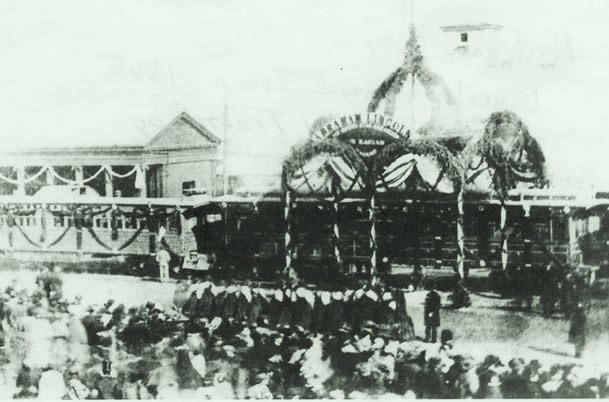 The funeral train left Michigan City the morning of May 1, 1865, just as the sun came out, and headed towards Chicago. (See Part Two [link] for more information on the Michigan City stop.) The Chicago Tribune reported, “The whistle was then sounded, and the train left for Chicago at 9:15 a. m. The crowd was immense. They lined the track for a long distance, until the train had left the suburbs of the city.” The paper reported that nothing notable happened on the rest of the journey to Chicago “save the minor episode of several notable personages of the party from Washington being left by the train, and overtaking it at Porter Station, by means of an express engine.” 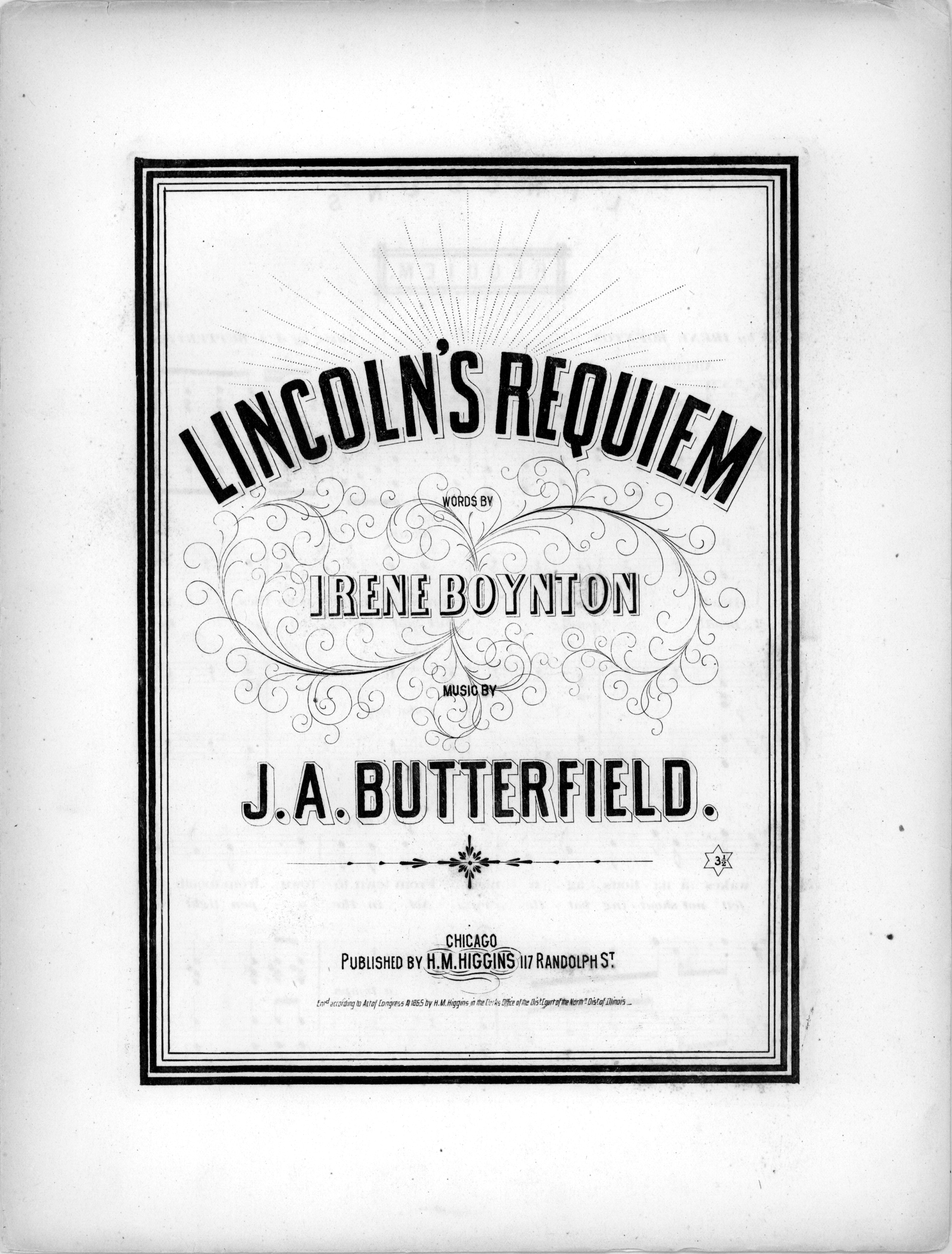 According to the Indianapolis Daily Journal, the train passed the “handsomely draped” depot at Lake, Indiana, and then passed “mourners…who watched with anxious hearts,” at Gibson, Indiana, before crossing the state line into Illinois. The Chicago Tribune reported, “Promptly at the hour, the funeral train, whose coming many thousands awaited with breathless expectation, entered the suburbs of our city.”As the train neared the Windy City, ringing bells and the firing of salutes could be heard in the distance,but the crowd was silent. According to historian Robert M. Reed, that crowd was somewhere between 100,000 and 250,00 people. The Chicago Tribune reflected on the past visit of Abraham Lincoln to the city when the crowd filled the air “with shouts of welcome,” and contrasted that with the arrival of the funeral train when thousands stood “in silence and with hearts whose very beatings were hushed as the hour drew near which should commence the share of Chicago in obsequies to him whim she has delighted to honor.”

The train pulled into a temporarily erected depot at Park Row (Park Place). As at other stops, a gothic funeral arch spanned the depot, its columns reaching 40 feet tall. The structure was covered in fifty American flags, and inscriptions such as “Faithful to Right, a Martyr to Justice.” According to the Tribune, while guns fired salutes and bells tolled, “every one in that vast crowd kept place – not a soul stirred, or spoke; the dropping of a pin might almost have been heard in the midst of the throng. The figures were immovable, almost as if placed on a canvas.” At 11:15 a. m., the coffin was placed on a dais under the arch. Mourners gathered around while a band played “The Lincoln Requiem.” The hearse pulled up and the coffin was loaded into it. Thousands of people looked on as the coffin was carried from the train to the hearse and the procession headed from Park Place to Michigan Avenue.

The procession included Chicago police, U. S. military regiments and veterans, members of Congress, and a group of governors (including Indiana Governor Oliver P. Morton), other dignitaries, Masons and Oddfellows, University of Chicago students, several benevolent and religious organizations, “and last but not least the men whom he has lifted from bondage and stamped with the dignity of manhood, the race which by the stroke of his pen he delivered from the task maker, and made forever free,” as reported by the Tribune. The According to Reed, as many as 37,000 people participated in the procession, while 120,000 people looked on. The Tribune reported that it lasted four hours. 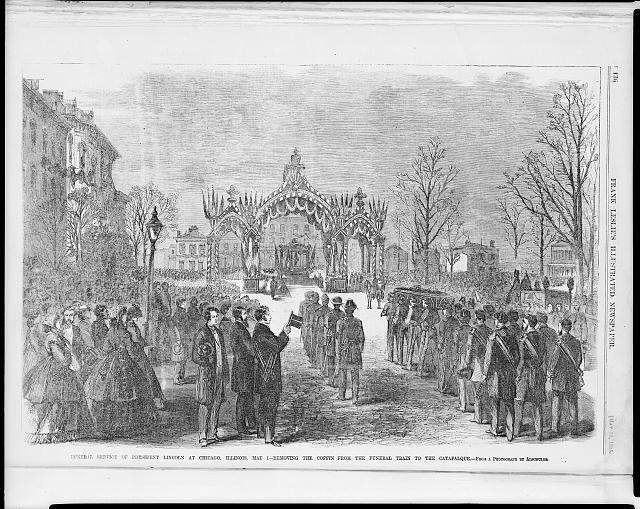 (Image:Funeral service of President Lincoln at Chicago, Illinois, May 1. Removing the coffin from the funeral train to the catafalque, Library of Congress Prints and Photographs Division, http://www.loc.gov/pictures/item/99613994/)

The procession turned onto Lake Street and then south on Clark Street to the Cook County Court House. The coffin arrived around 12:45 and was placed in the rotunda. The Tribune reported, “ Upon entering the north door of the Court House the visitor is struck with the air of intense gloom which pervades the rotunda. Everything was draped in black with an inscription on each side of the room including, ‘He left us sustained by our prayers; He returned embalmed in out tears.’ ”

The funeral procession filed passed the closed coffin until 5 p. m. After embalmers had a chance to work on the remains, the public was allowed in as well. Reed states they barely had a chance to say goodbye to the fallen president as they moved through at a rate of 7,000 an hour. The crowds were still filing past at nine when it again began to rain, and continued until past midnight to the sounds of hymns. The river of mourners continued until the evening of Tuesday, May 2, when the doors closed around 8 p. m., despite the fact that people were still lined up outside. The coffin was closed and placed in a hearse; around 8:45 the funeral procession led the hearse to the train depot on Canal Street. The train left Chicago around 9:45 p. m. to the sound to tolling bells. 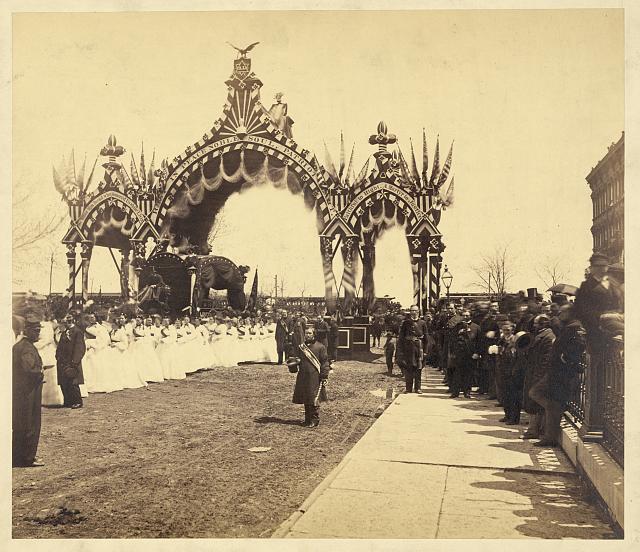 As the train crossed through Illinois towards Lincoln’s home town, it passed large bonfires in Bridgeport and large crowds a Summit, Willow Springs, and Lemont. At Lockport bonfires and the torches of the gathered mourners lit up buildings draped in black. One banner read simply, “Come Home.” At midnight the train passed Joliet where 12,000 people gathered despite the rain. Around 1 a.m. the train passed Wilmington and at 2 a.m. it passed Dwight, both of which were draped in mourning with large crowds present. At 5 a.m. the train passed through Bloomington and under a banner reading “Go To Thy Rest.” At 6 a. m. it passed Atlanta and then the town named Lincoln, after the young lawyer who would much later become president.

The train arrived in Springfield at 9 a. m. According to Reed, 350 workers had been decorating the city for the ten days. The State House was decorated outside and inside using over 1500 yards of mostly black and some white fabric, 300 yards of black velvet, and 300 yards of silver lace and fringe. Two hundred vases filled with flowers filled the rotunda with their scent. 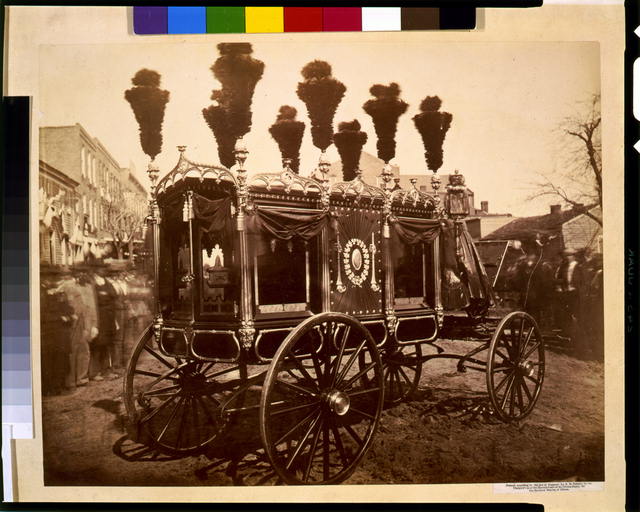 When the train reached the Springfield depot, the coffin was loaded into an elaborate hearse bearing a silver plaque engraved with “A. L.” Six black horses in feathers and mourning blankets pulled the hearse to the State House as part of a large procession of military regiments, officers, political leaders, and civic groups. According to Reed, the procession entered the Hall of Representatives where Lincoln gave his famous “House Divided” speech. The coffin was placed on a dais and at 10 a. m. the doors to the State House were opened to the awaiting crowd of approximately 75,000 people. People filed silently by as a band played hymns accompanied by 30 vocalists.

A steady crowd continued shuffling past until the coffin was closed Thursday morning, May 4, at 10 a. m. Again the procession was assembled, this time headed to Oak Ridge cemetery. The coffin was placed on a stone slab in a tomb next to the awaiting remains of Lincoln’s son, Willie. The Tribune stated, “Thus, in death, as in life, are they near each other.” The limestone vault was lined with black velvet and evergreens. Lincoln was laid to rest there in a funeral ceremony that included hymns and scripture and closing words by several ministers. The Chicago Tribune concluded, “The ceremonies having terminated, the doors of the vault were closed . . . the mourners retired . . . Thus we buried him; thus we leave him – the great, the god, the martyr President.” 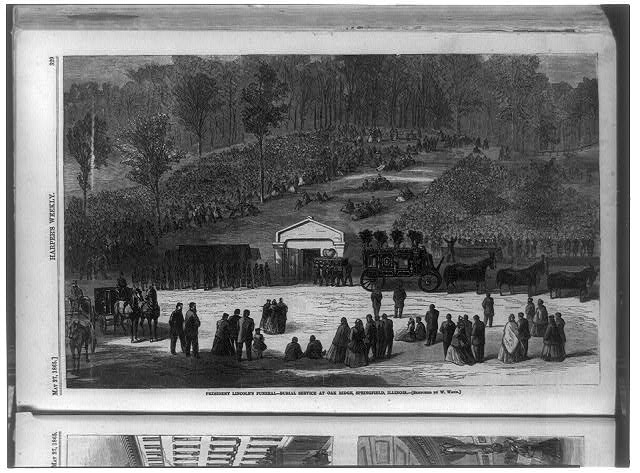