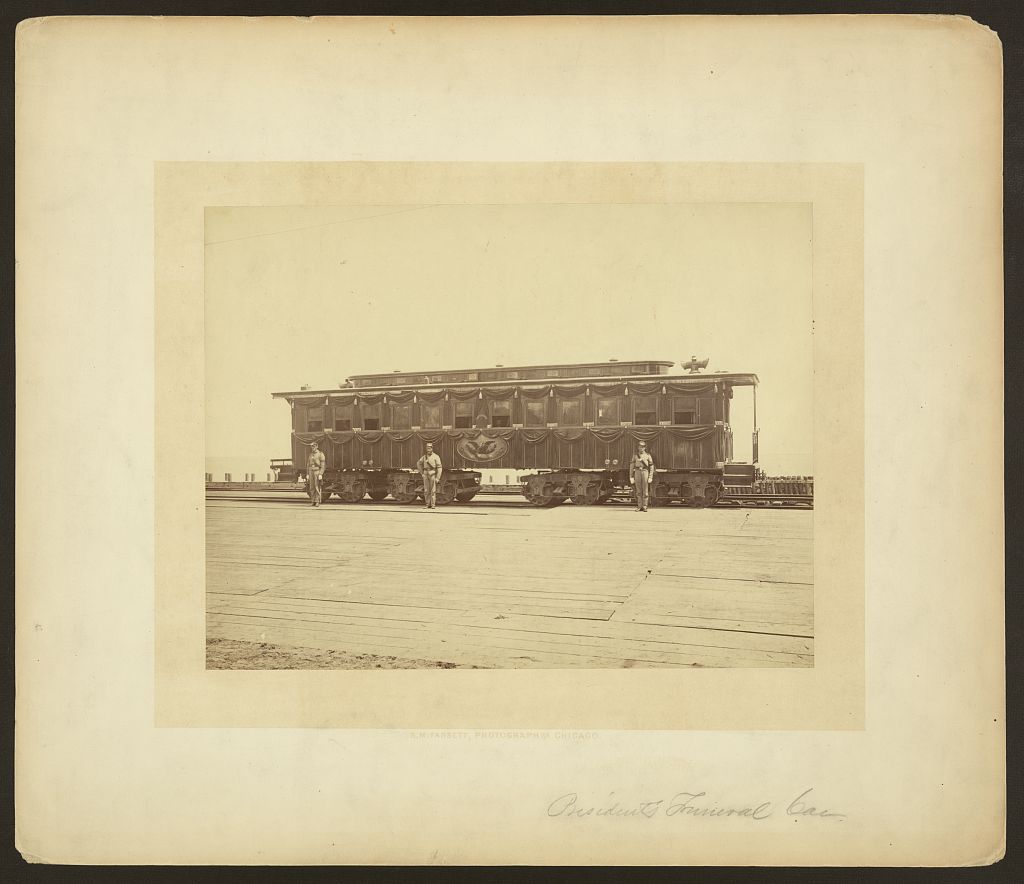 On the evening of April 14, 1865, only five days after the Confederate surrender that would end the Civil War, an assassin shot President Abraham Lincoln.  He died the next day at 7:22 a.m. While Union soldiers hunted the conspirators, the nation went into mourning. The funeral for the assassinated president took place April 19, 1865 at the White House.  The New York Times reported that “thousands wended their way up the capitol steps, into the grand rotunds, by the bier and coffin of the President… their homage was silent and tearful.”  On the morning of April 21, a military guard placed Lincoln’s casket in the ninth car of a funeral train which was draped in black. The casket of Lincoln’s son William who had died in 1862 was also aboard for the trip back to the Midwest.

The train, which also carried friends, family, high ranking officials, and a military guard, left Washington D.C. destined for Lincoln’s home town of Springfield, Illinois, on April 21. The New York Times reported: “The remains of Abraham Lincoln have departed from Washington. All of the mortal part that is left on earth is now on its way to its final resting place beneath the sod of his chosen State.” (View the New York Times article for further description of the train and its route through the eastern states.)

The War Department directed the procession which declared the tracks along the route to be “military roads.” Stops were scheduled at cities along the way to allow mourners to pay homage. These included elaborate funeral processions where the remains were taken from the train for public display in the state capitol or important municipal building.  Smaller towns located between stops erected arches over the tracks, tolled bells, draped buildings in black, and fired salutes. At night, citizens hung lanterns and lit torches. According to historian Robert M. Reed, people aboard the train reported that even in normally deserted rural areas, “the night sky was almost continuously lit by the lingering torches and bonfires of countless thousands.” 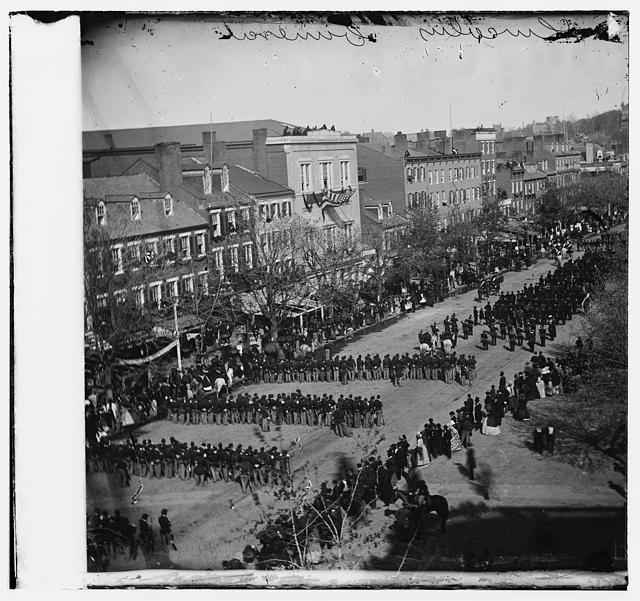 On April 30 the Lincoln funeral train passed into Indiana where Lincoln spent much of his youth (1816-1830).  The War Department directed: “The route from Columbus to Indianapolis is via the Columbus and Indianapolis Railroad, and from Indianapolis to Chicago via Lafayette and Michigan Railroad.  In order to guard against accidents, trains will not run faster than twenty miles per hour.” The train stopped in Richmond first, at 3 a.m., to the sound of tolling bells and a crowd of somewhere between 12,000 and 15,000 people. Here, Governor Oliver P. Morton and almost 100 elected officials paid their respects. The governor and other several other high-ranking officials boarded the train for the trip to the state capital. 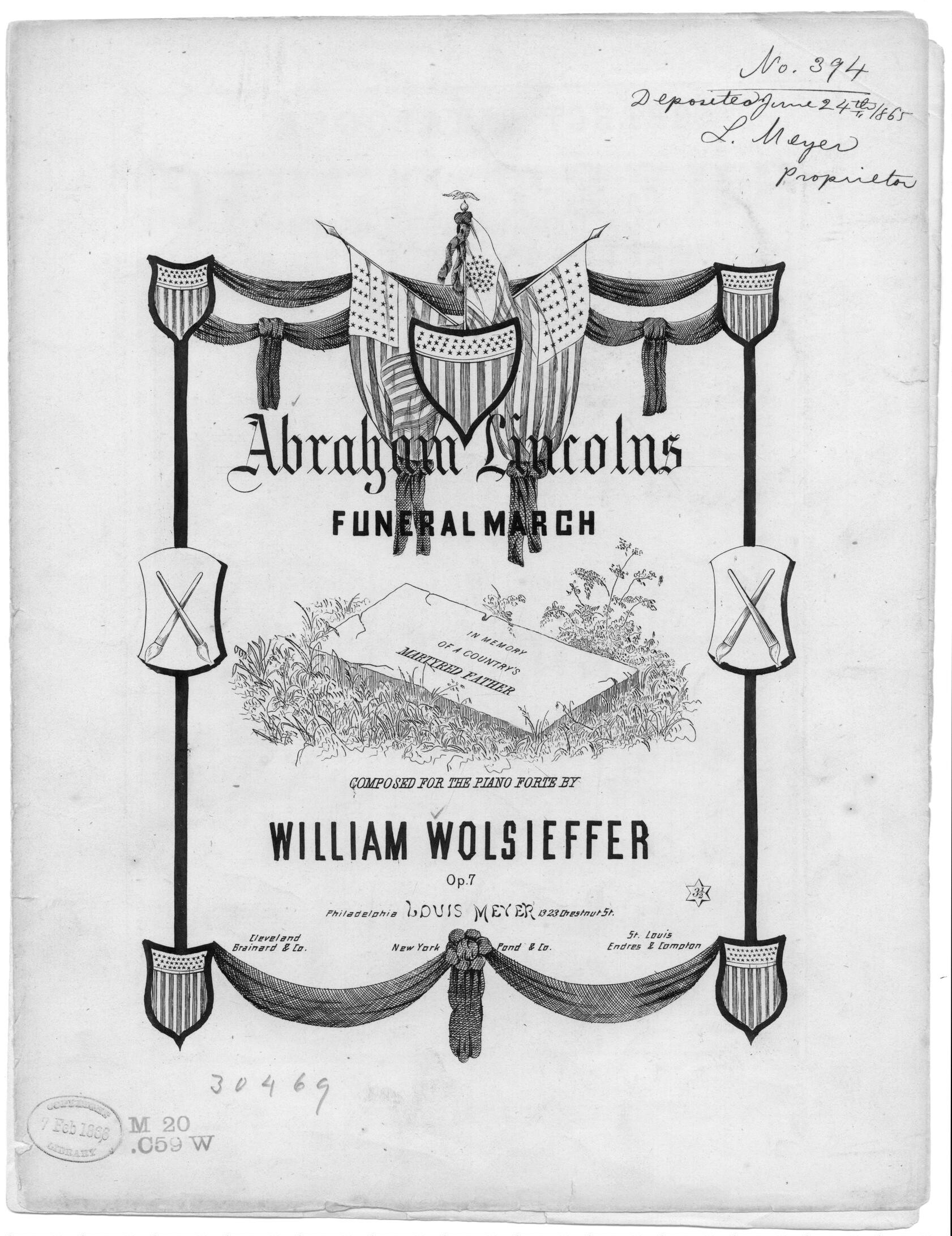 The train reached Indianapolis April 30 at 7 a.m. in the pouring rain. The city was decorated with arches, evergreens, and flags. The Indianapolis City band played the Lincoln Funeral March while soldiers moved the casket to the hearse. The hearse, which was an ornately decorated carriage drawn by six plumed white horses, delivered the casket from the train to the State House through streets lined with people. The Indianapolis Daily Gazette noted “the archways and mourning festoons across the streets, the public and private buildings draped in the habiliments of grief, the funeral procession, the solemn dirges, and, above all, the patient multitude that stood for hours in the drenching rain waiting an opportunity to look upon the earthly tenement so lately vacated by the spirit…”

The coffin was placed in the interior hall of the State House which was lined in black cloth.  The Indianapolis Guard of Honor protected the flower-surrounded coffin. The Indianapolis Daily Gazette estimated that 15,000 troops and 60,000 private citizens passed through the rotunda that day.  Rain prevented the elaborate ceremonial procession from the State House back to the train depot which had been planned for that evening.  Instead, the casket lay in state until 10 p.m., which was longer than planned, and then the hearse carried the casket directly back to the train depot.  Mourning Hoosiers followed the carriage. The train left Indianapolis at midnight. 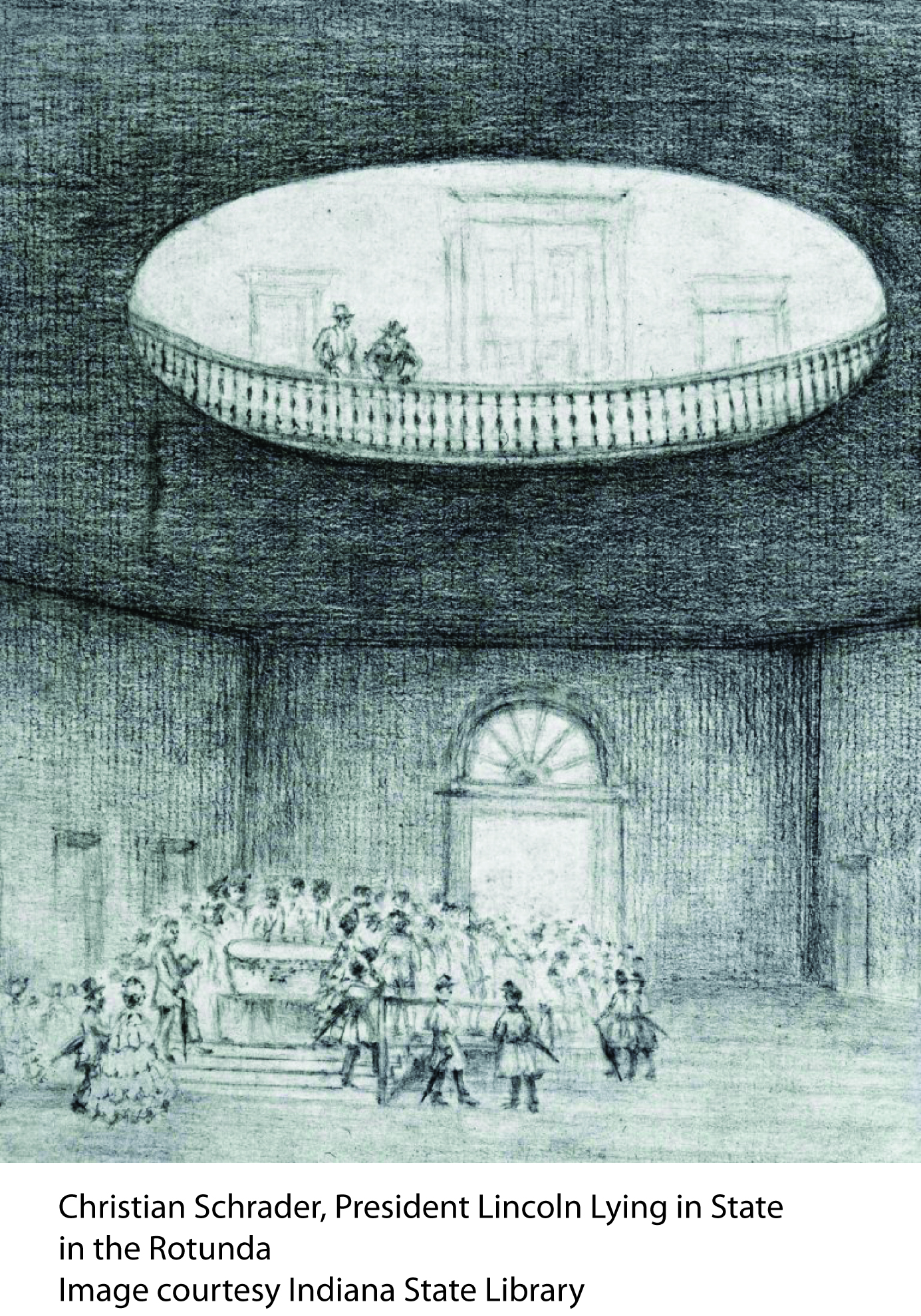 An extensive file of primary sources on the Lincoln Funeral Train is available for researchers at the Indiana Historical Bureau. More information on the Indiana stops in Indianapolis and Michigan City can be found through the text of two state historical markers, one in Michigan City and one in Indianapolis. (Even more information on these Indiana stops can be found in the footnotes of the latter marker, available online.)