Sec. 1. A state flag is hereby adopted, and the same shall be of the following design and dimensions, to-wit: Its dimensions shall be three (3) feet fly by two (2) feet hoist; or five (5) feet fly by three (3) feet hoist; or any size proportionate to either of those dimensions. The field of the flag shall be blue with nineteen (19) stars and a flaming torch in gold or buff. Thirteen (13) stars shall be arranged in an outer circle, representing the original thirteen (13) states; five (5) stars shall be arranged in a half circle below the torch and inside the outer circle of stars, representing the states admitted prior to Indiana; and the nineteenth star, appreciably larger than the others and representing Indiana shall be placed above the flame of the torch. The outer circle of stars shall be so arranged that one (1) star shall appear directly in the middle at the top of the circle, and the word "Indiana" shall be placed in a half circle over and above the star representing Indiana and midway between it and the star in the center above it. Rays shall be shown radiating from the torch to the three (3) stars on each side of the star in the upper center of the circle.

Township trustees, boards of school trustees and boards of school commissioners of the various school corporations of this state, and board of county commissioners of the several counties of the state, may procure a state flag for each school and for each courthouse under their respective supervision and cause the same to be placed conspicuously in the principal room or assembly hall and any courtroom of any such building or courthouse.
(Formerly: Acts 1917, c.114, s.1; Acts 1955, c.146, s.1.) As amended by Acts 1979, P.L.1, SEC.1.

IC 1-2-3-2
Sec. 2. It shall be the duty of the commissioner of the department of administration to receive and store every flag displayed pursuant to section 1 of this chapter following such display. Upon receipt of a request of a member of the Indiana general assembly, the commissioner shall forward to the individual, group, organization, association, or other entity indicated in the legislator's request one (1) of the state flags displayed according to section 1 of this chapter. The commissioner shall forward such flags in the same order as the requests are received by him.
(Formerly: Acts 1967, c.162, s.2.) As amended by Acts 1982, P.L.2, SEC.4.

IC 1-2-3-3
Sec. 3. Each and every member of the Indiana general assembly shall be entitled to request and have sent, during any one (1) period of three hundred (300) days, two (2) of the state flags displayed pursuant to section 1 of this chapter. In the event that any flags are not sent at the request of a legislator before December 31, 1967, or at the end of any subsequent period of three hundred (300) days, they shall be delivered to the lieutenant governor of the state of Indiana by the commissioner of the department of administration to be disposed of at the lieutenant governor's discretion. Provided, however, that any member of the Indiana general assembly may purchase from the department of administration any other state flag which may have been manufactured in state industries at a price not to exceed the actual cost of each of said flags.
(Formerly: Acts 1967, c.162, s.3.) As amended by Acts 1982, P.L.2, SEC.5.

The blue and gold state banner was adopted by the 1917 General Assembly as part of the commemoration of the state's 1916 Centennial celebration, after a competition sponsored by the Daughters of the American Revolution. The winning design was by Paul Hadley of Mooresville, Indiana. The name was changed to flag by the 1955 General Assembly. The dimensions were changed to standard usage. 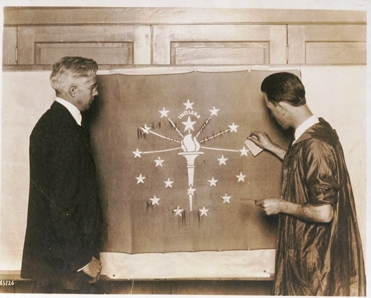 The state flag is always displayed on the observer's right of the American flag.