The Culbertson Mansion marker (22.1996.2) is located in New Albany, Floyd County in front of the mansion. Courtesy David C. Barksdale

No appropriated state funds were available for the installation of markers or memorials when the Commission was created. It was noted by the Commission, however, that "It would thus be strange and a source of some inquietude, had the year 1916 seen no Centennial markers and memorials placed here and there throughout Indiana." With the encouragement of the Commission many historic sites, including historic highways and trails across the state were marked with monuments, plaques, tablets, and memorials. They were installed by cities, counties, individuals, groups, and historical organizations.

In 1921, the Indiana General Assembly specifically authorized the Indiana Historical Commission to cooperate with and advise local historical societies, clubs, and other organizations interested in locating and marking historical sites. There were no funds made available to the Commission for the purchase of historical markers.

In order to determine the status of marking historical sites in Indiana, the Commission in a 1921 Indiana History Bulletin issued a preliminary list of markers by county; an updated survey was published in February 1922. More than 150 signs, plaques, and memorials were installed in 1923 through the cooperative effort led by the Commission. A follow-up survey was published in the April 1924 Indiana History Bulletin.

Not until 1936, however, did a state government program for marking sites become a reality; the Works Progress Administration (WPA) project of marking historical sites was approved with funding. The program was authorized twice—January 9, 1936-June 30, 1937 and January 26, 1938-January 31, 1942—as a jobs program for Hoosiers. In the first phase, the WPA furnished the material for the signs and the labor for making and painting them. The signs were three feet wide and two feet high and were made of thin sheet metal framed in angle iron. They were painted white, and the inscriptions (text) were hand-painted in black capital letters. The posts and braces (mounting) for the markers were uniform and made under contract for the state, but the cost of ninety cents each was be paid with private funds.

The location of each sign and the text was to be approved by the Historical Bureau. The work and expense of installing the signs was provided by the Indiana State Highway Commission. The Historical Bureau requested that county historical societies send locations of sites that should be marked and text suggestions for each sign.  In 1939, there were improvements in the signs. They were made of rolled steel, the painting was improved with lower-case lettering—making the signs easier to read—and a small sketch of the subject commemorated appeared next to the text. The cost of these signs was $2.50 payable by the applicant. The labor of making the signs was still provided by the WPA.

These WPA signs were considered temporary because of the type of material used; it was expected that they would be illegible and rusty in a few years. They served, however, to call the attention of citizens and travelers to persons and places of historical interest in Indiana.

Under the project, more than 2,200 signs were installed from 1936 to 1942. Most of the signs became shabby with age. In 1942, the State Highway Commission made plans to remove all unsightly WPA signs and collect the metal, which could be utilized as scrap iron during the war.

In 1947, a search was begun for a more permanent type of marker. It was decided that the markers should be made of cast aluminum, with raised gold letters against a blue enamel background, and mounted on a post. This is the same format that is used today. The Historical Bureau squeezed $1,000 from the agency’s operating budget and purchased a dozen of these new permanent historical markers to replace some of the nearly illegible WPA signs on sites of statewide interest. The Historical Bureau requested a special appropriation from the Indiana General Assembly to purchase additional markers, but the request for funds was denied.

Since funds were not approved to purchase markers, the Historical Bureau tried to interest local historical societies, patriotic societies, luncheon clubs, chambers of commerce, and other organizations in purchasing markers. The Bureau offered the markers at a cost of about $85.00 each. By the year 1951, forty of these markers had been installed using private funds. 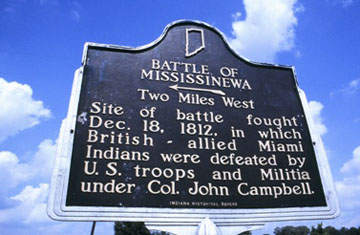 The Battle of Mississinewa marker (27.1947.1) is located on SR 15 in Marion, Grant County. Only three of these 1947 markers remain today. Courtesy Indiana Historical Bureau, State of Indiana

In 1957, a concerted effort was made by the Historical Bureau and the historic sites committees of the Society of Indiana Pioneers and the Indiana Historical Society to revive the marker program in the state. Between the years 1957 and 1965, approximately twenty markers were installed using private donations.

The Indiana Sesquicentennial Commission was created by the 1957 Indiana General Assembly to celebrate Indiana’s 150th birthday as a state in 1966. Installation of permanent state historical markers was one of the activities suggested to celebrate the sesquicentennial of statehood. Several hundred proposals resulted from a promotional mailing. The markers ranged in price from $150.00 to $195.00. Sixty-five markers were purchased by the Commission. In almost every instance the markers were dedicated with a proper ceremony attended by prominent national, state, and local citizens and interested groups. An attempt was made not to call any particular site the "first," "only," or "most important" unless sufficient proof existed to do so. It was the hope of the Commission that its marker program would stimulate others to pursue the installation of historical markers. Something new in the state historical marker program was added when maps were incorporated with the texts. Since the text was limited to about thirty-five words, it was felt that the diagrams would provide considerably more information. 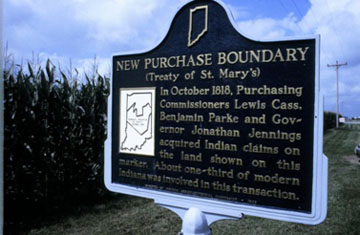 The New Purchase Boundary (Treaty of St. Mary’s) marker (4.1966.1) is located west of Fowler on SR 18 in Benton County. It was installed by the Indiana Sesquicentennial Commission in 1966 and restored in 2000 by volunteers. Courtesy Indiana Historical Bureau, State of Indiana

The Indiana Historical Bureau prepared a new listing of historical markers of the state in the Indiana Sesquicentennial year, the first since 1929. It was published in the April 1966 Indiana History Bulletin and updated in the July 1967 issue.

A New Era for Historical Markers

Although for decades the Indiana Historical Bureau had administered the purchase of historical markers in a state format, the Bureau was not given statutory authority to carry out this function until 1978. As a result, the Bureau began a county-by-county survey of markers, plaques, and memorials in Indiana to provide a comprehensive and orderly central repository of marker information. Volunteers across the state completed survey forms, and the results—although incomplete—were published in 1978 and 1979 issues of the Indiana History Bulletin.

In 1993, continuing appropriations from the Indiana General Assembly to purchase markers began. From 1947 to 1988, a period of forty-one years, a little over 200 markers were installed. As a result of the infusion of state funds, in the fifteen year period from 1989 to 2004, over 225 markers have been installed using state and private funds.

What about the future? Since historical markers are cast in aluminum, are fixed solidly in place, and are not amenable to revision, marker texts are being thoroughly documented with primary source material. With historically accurate texts, markers can serve the purpose of communicating history to the general public in capsule form. The markers may be used as educational tools for teachers, students, and others who wish to learn more about the state’s history.

By 1998, a searchable database containing all Indiana state historical markers was made available on the Historical Bureau Web site; it is regularly updated. The database contains the marker county, title, text, credit line, and location and is searchable in all of those fields. In 2003, the Historical Bureau began adding texts with footnotes for current and future markers to provide additional learning opportunities.

A goal of the program is to increase the diversity of marker topics so that persons reading Indiana state markers can realize that Indiana is like a tapestry, an overall image made up of countless single strands, each with its own unique history worth celebrating. Markers should reflect the rich political, social, cultural, economic, intellectual, and scientific history of the state.

In 2001, the opportunity came to collaborate with the Division of Historic Preservation and Archaeology, Indiana Department of Natural Resources, on an Underground Railroad Initiative, which will help document this important facet of Indiana history. The numbers of markers about women, American Indians, and ethnic groups are also increasing. 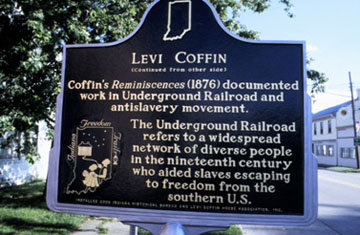 The Indiana Historical Bureau prepared a new listing of historical markers of the state in the Indiana Sesquicentennial year, the first since 1929. It was published in the April 1966 Indiana History Bulletin and updated in the July 1967 issue.

The past, present, and continued success of the Indiana Historical Marker Program has been—and will be—dependent on the many volunteers across the state who have given—and will give—of their time, energy, and money to see that markers are installed which present, preserve, and celebrate the history of Indiana. To those people who have worked on the program, thank you! To those of you who have not yet become involved with the program, please join the effort to continue marking Indiana’s history for future generations!

For more information about the Indiana State Historical Marker Program, including how to apply for a historical marker, visit our website or call 317-232-2535.