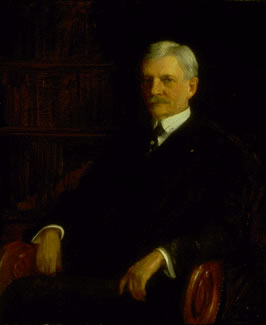 THOMAS MARSHALL, best remembered for his eight years as Vice-President under Woodrow Wilson was born in North Manchester, Indiana. His father was a physician. He graduated from Wabash College in 1873 and was admitted to the Columbia City bar soon after. Although he was a popular public speaker and active in local Democratic politics, Marshall was still only a small town lawyer when he received the nomination for governor in 1908, a compromise dark horse candidate.

Marshall was elected and was a popular governor, although his attempts to have the state adopt a new constitution failed. A few progressive measures, such as a child labor law and a corrupt practices act, were enacted under Marshall's leadership, but many more that he urged were defeated. During his terms as Vice-President he became well-known nationally for his wit, achieving fame for his remark, delivered as an aside during a Senate debate, "What this country needs is a really good five cent cigar."

Slight of stature and impeccably groomed, Marshall continued as a popular orator after retiring from the Vice-Presidency. His autobiography is an entertaining record of his career.