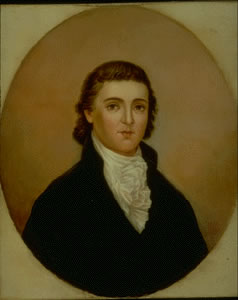 THOMAS POSEY was born in Virginia and educated in the country schools. An adventurer and a soldier, he began his military career at age nineteen fighting with a Virginia company against the Indians. He served with distinction during the American Revolution and settled down in Spottsylvania County for a few years afterward to serve as county lieutenant and magistrate.

He joined Anthony Wayne in fighting the Indian wars in the Northwest for a year, and then he moved to Kentucky, where he served in the state senate and as lieutenant governor. Moving with the frontier, General Posey turned up in Louisiana by 1812 and briefly served as United States senator from that state. He was appointed governor of the Indiana Territory in 1813 following Harrison's resignation and served in that capacity until statehood in 1816.

He ran unsuccessfully for governor against Jonathan Jennings in 1816 and was appointed Indian agent for Illinois Territory. He died in Shawneetown while serving in the office.

Handsome and graceful, distinguished by a military bearing, Posey was believed by some to have been George Washington's natural son.