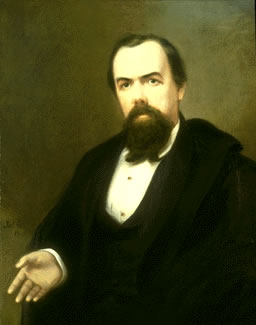 OLIVER P. MORTON was the first Indiana-born man to hold the office of governor. Born in Salisbury, Wayne County, Indiana, Morton worked as a hatter's apprentice for four years before he attended Miami University in Ohio and studied law both in Centerville, Indiana, and in law school at Cincinnati.

Originally a Democrat, Morton was one of the organizers of the Republican party, and in 1856 he ran unsuccessfully for governor against Ashbel Willard. In 1860 he was elected lieutenant governor on the ticket with Henry S. Lane and became governor in 1861 when Lane was elected to the United States Senate. Morton was re-elected in 1864 and served until 1867 when he was elected to the United States Senate, where he was a leading Radical Republican until his death in 1877.

Morton served as governor during the critical period of the Civil War, and, although his terms were marked by conflict between the governor and the legislature, historian James Ford Rhodes called him, "The ablest and most energetic of the war governors of the Western States."

A forceful and passionate partisan of unquestioned intellectual and executive ability, Morton was a highly controversial figure throughout his political career. He was partially paralyzed by a stroke in 1865 and thereafter was obliged to walk with canes.

T. C. Steele painted a portrait of Morton as one of the epochal governors chosen for the centennial celebration in 1916.