The site of Richmond State Hospital was purchased in 1878 and contained approximately 307 acres. The area was conveniently situated two miles west of the city of Richmond, and was immediately north of the Pittsburg, Cincinnati, Chicago, and St. Louis railway. The buildings consisted of an Administration Building, East Wing, West Wing, Rear Center, five cottages on the east side of the grounds and a like number on the west side, a boiler house, laundry, well house, meter house, and pump house, totaling nineteen buildings scattered over about forty acres of ground. It was estimated that the hospital could accommodate 434 patients.

The construction of the hospital buildings began in the summer of 1884, but were not completed, equipped and furnished until 1890. During the interim, from 1887 to 1890, the School for Feeble-Minded Youth occupied select buildings. This was one of the first institutions in the nation to serve people with intellection and developmental disabilities These patients were subsequently transferred to Fort Wayne, Ind.

The buildings which had been occupied were refurbished, and on July 29, 1890, “Eastern Indiana Hospital for the Insane” was formally opened. The first patient was admitted on August 4, 1890, and by the end of August, 101 patients were on the grounds. 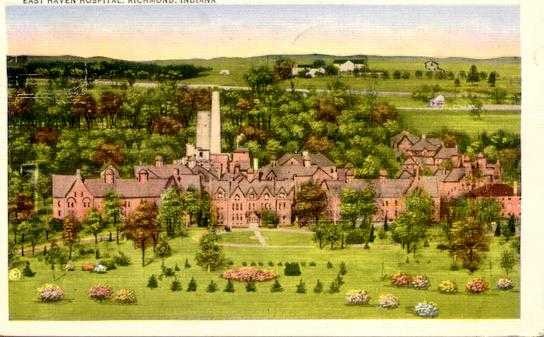 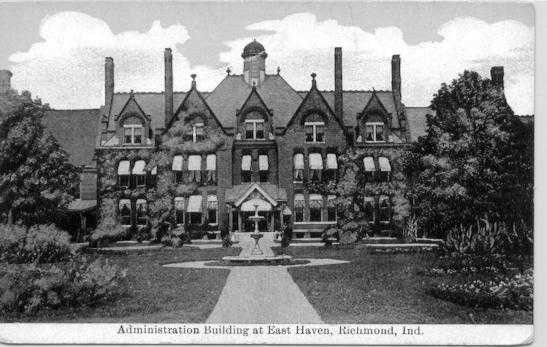 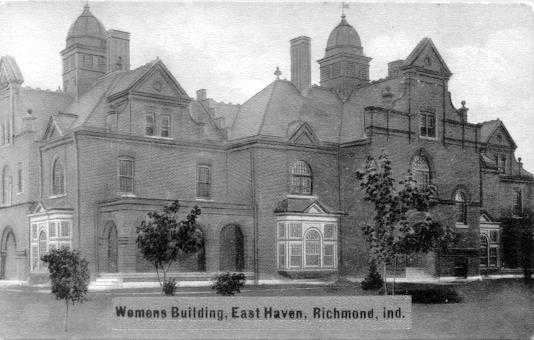 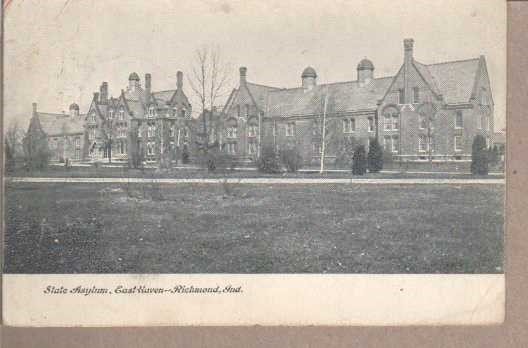 In 1911, the Colony Act was passed, and an additional 446 acres were purchased to allow patients to work the farmlands. The five farms acquired were christened “Wayne Farms” and the arboretum furnished the names of the houses as they were developed. The establishment of the colony was marked as an epoch in the hospital’s history, as it “opened a new field for employment of the able-bodied and the diversion of some of the introspective and misdirected.”

Male patients with agricultural backgrounds were placed in the colonies. Their productive efforts were recognized in many ways, but specifically through ribbons and prizes received from the exhibits of cattle and farm products at the Wayne County Fair as well as the Indiana State Fair.

In the year of 1919, the Voluntary Admission Act was passed, and Richmond State Hospital received eight patients through this provision within the first year.

On May 16, 1927, the hospital’s name was officially changed from the Eastern Indiana Hospital for the Insane to Richmond State Hospital.

In 1950, there were approximately 1,700 patients with an average length of stay of seven years. The purpose of the hospital at this time was “Custodial Care” for all patients. Primary treatment emphasis was limited to personal hygiene and crisis intervention.

In 1980, Richmond State Hospital was certified for Medicare/Medicaid patients and in 1986, our facility became accredited by the Joint Commission for Accreditation of Healthcare Organizations.

In 1991, Richmond State Hospital opened the 179-bed Residential Treatment Center, consisting of 6 units arranged in pods of two and our Food Preparation Center. With the creation of the RTC building, we were able to move our entire patient population into a facility with single and double occupancy bedrooms.

Over the years, advances in the care and treatment of those with mental illness has resulted in an organized and goal-directed treatment delivery. Today, the primary treatment emphasis is provided through an individualized treatment plan, created and managed by a multi-disciplinary treatment team.

Richmond is the largest of the six State Psychiatric Hospitals operated by the Indiana Family and Social Services Administration’s Division of Mental Health and Addictions. After 130 years, the administration building, the three adjacent to it, and only two other buildings have survived from the original plans.

Many things have changed, but Richmond State Hospital remains committed to meeting the mental health needs of our changing population and delivering comprehensive treatment of superior quality.