House of Samuel Huggard, son of Andrew and Jane Huggard.

Andrew and Samuel were the sons of Moses Huggart of Rockbridge County, Virginia. Moses was listed in the 1810 census being the head of household with “seven free nonwhite persons” living there. They probably took the name Huggart, from a white family that lived on the Big Calfpasture River in Virginia.

Samuel applied for a patent for 80 acres of land on Sept. 11, 1834. He paid $100 for the land, which was $1.25 an acre. That was the minimum price and the minimum amount of land that could be purchased. Those were the guidelines of the federal land law of 1820.

The purchase was approved on March 20, 1837. Samuel was not recorded as actually living in St. Joseph County until the 1850 census.

Samuel’s younger brother, Andrew, arrived in the county in 1848. They may have came together, since the 1850 census listed them as residing in the same household.

Before moving to Indiana, Samuel lived in Montgomery County, Ohio. In 1858, half of the Indiana farm was deeded to Andrew. In 1863, the brothers bought an adjacent 80 acres. When Samuel died on Dec. 21, 1872 Andrew became the sole owner.

Andrew was born in 1816 in Virginia. He moved to Dayton, Ohio when he was 20 and then later to Miami County, Ohio. He was trained as a cobbler (shoemaker) at an early age.

Andrew married Jane Clark in 1839. She was from the Blue Ridge area of Virginia. They had five children. Wesley, Mary and James were born in Ohio. Sarah and Samuel were born in Indiana.

Wesley and James each purchased 40 acres of the families’ farm in 1865 and 1873. Andrew made most of his income from farming. He did some shoe repair for neighbors in the winter.

Andrew and Samuel were both members of the Sumption Prairie Baptist Church. Samuel served on a committee planning to build a new church in 1852. At some point, Andrew became active in the Olive Branch United Brethren Church. He was listed as the superintendent of a Sunday school there in 1881. Andrew’s children attended the Olive Branch school, too.

Andrew was a successful farmer and highly regarded in the community. His October 1, 1881 obituary in the South Bend Tribune even cites him as the “first colored man to run for office” in St. Joseph County. We don’t know what that office was. 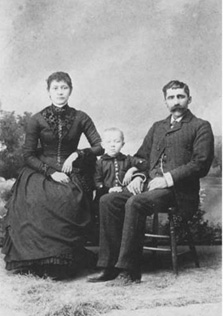 Samuel (son of Andrew and Jane Huggard) and wife Rosella and son Clarence
in photo from 1890.