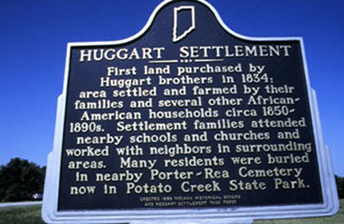 This community was an unique black settlement in the 1800s. It was located in southern St. Joseph County near present-day Potato Creek State Park. Residents attended church and school with their white neighbors.

Its most prominent resident was Andrew Huggart. Andrew’s brother, Samuel, bought land here in 1834. The settlement reached a peak around 1880, with 28 residents. They were primarily light-skinned African-Americans. The 1880 census called them “mulattoes.”

The Bass and Powell families also lived in the settlement. The Huggarts were from Virginia. The others were from the Carolinas. By the end of the 1800s, residents had sold their land and moved to the city to seek jobs. 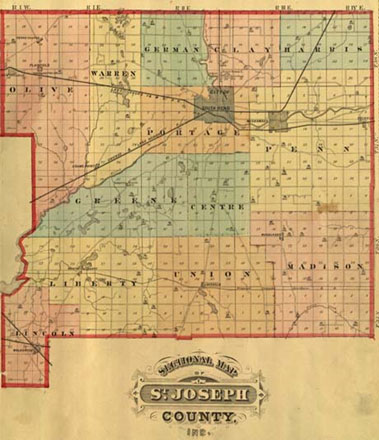 This area of Indiana was surveyed by the Government Land Office in 1830/1834 to make it ready for people to purchase land. St. Joseph County was divided into townships. Each square mile block is called a section. The Huggart settlement was in section 29. This is in the northwest corner of Union Township in the southern part of St Joseph County. Can you find it on the1875 atlas map at top? 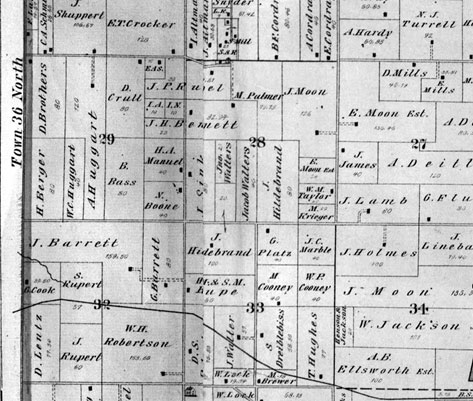 Maps of who owned land at a certain time are called plat maps. The Huggart settlement was in section 29 of Union Township. By looking at this plat map from 1875, can you find where the African –American families (Boone, Manuel, Huggart, Bass) lived? The smaller numbers on the map show how many acres that person owned. The little black boxes represent where a building was located.