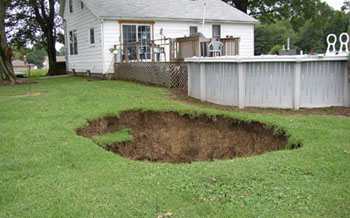 Underground mines have removed more than 900 million tons of coal in Indiana since the 1800s. Geologists estimate that up to 150 square miles of underground coal mines exist in the 26 coal-producing counties in southwestern Indiana. Some of these mines were never surveyed, so it is impossible to know the location of all abandoned underground mines.

The room and pillar method was used most often. Put simply, large areas or “rooms” of coal were taken with columns or “pillars” of coal left in place as roof support. Over time, these pillars can erode to the point of collapse, no longer supporting the bedrock above the mine. This loss of support is transferred to the ground surface, which also drops, creating structural and public safety problems.

Modern mining technology is vastly improved from historical practices and provides greater protection for the workers and surface features. The Restoration Section is focused entirely upon subsidence from old, unregulated and abandoned mines. Property owners may not be aware of an underground mine until it collapses, leaving a depression or hole in the ground or causing structural damage to their homes.