Before agriculture became widespread, Indiana was quite a wet place. When Indiana was originally surveyed (1799 to 1834), the surveyors found and described broad areas of poorly drained wetlands. 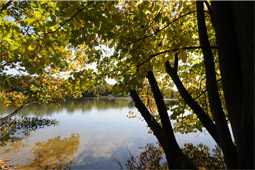 In 1816, about half of the surface area of northwestern Indiana was ponded during six months of the year. Benton County was more than half wetland. In 1834, Beaver Lake, in Newton County, occupied 28,500 acres.

The year 1884 saw the start of major changes to the Kankakee River and its marshes by dredging, straightening the river, tiling and ditching the emergent lands. By 1917, Beaver Lake had shrunk from its 28,500 acres to 10,000 acres, and today exists in name only.

Today, the concentration is on preserving wetlands rather than destroying them. They are places of beauty, they provide habitat for a variety of plants and animals, and they replenish and a clean groundwater.

Several state-dedicated nature preserves protect a variety of wetland communities. We invite you to explore these interesting and beautiful wetlands. Here are a few examples:

To learn more, visit our list of Nature Preserves page.

are the result of ponds filling up with dead plant matter – peat. They are usually found in glacial depressions, with restricted drainage. The peat deposits often float. Eventually shrubs and trees cover the area. Along the periphery of the bog is often a zone of open water, marsh, sedge marsh or fen.

is a complex of linear and parallel east-to-west sand ridges interspersed with long ponds and marshes. It defines the beach-and-dune area of Lake Chicago, the precursor to Lake Michigan.

occur in peat at the base of slopes where they receive calcareous water seepage. They generally occur in lake basins and stream valleys. Water is usually freely running at the surface. There is a diverse mix of plant species including grasses, shrubs and trees.

occur on level or nearly level soil that has an impermeable or slowly permeable layer that causes a shallow water table. Spring ponds are common.

are on the floodplain of rivers and streams. Diversity of plant species depends on how much and for how long flooding occurs.

are wetlands dominated by grasses. They have water near or above the surface for most of the year and occur in glacial potholes, river valleys and lake plains. They have a wide variety of plant communities depending on the water depth – the deeper the water, the fewer the plant species.

are defined as permanent or semi-permanent small, still bodies of water, usually shallow enough to allow rooted aquatic plants across most of it.

differs by being big enough to have a barren wave-swept shore.

are wetlands dominated by sedges on peat, muck or wet sand. There is little plant diversity.

occur where soil is saturated from groundwater flowing to the surface in a diffuse flow. The soil makeup and water pH define the plant communities found around the seep.

are defined as flowing waters that are permanent year round. They are divided into creeks and rivers by their gradient and size.

with a wide and deep channel and a very large flow is actually a low-gradient stream – the difference is just in the name.

are permanent or semi-permanent bodies of water dominated by woody plants. They are often associated with ponds in wet floodplain forests.

Shrub swamps are dominated by shrubs;
Swamp forests by trees.