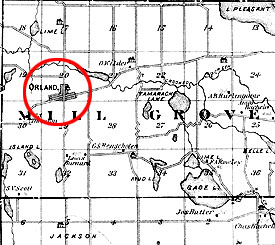 After the Fugitive Slave Act of 1850, the small community of Orland, lying along Indiana's border with Michigan, spurned federal authorities and brazenly aided runaway slaves. Many community leaders, including Russell Brown, S.U. Clark, and Captain Samuel Barry, actively took part in the Underground Railroad. Barry and four others were arrested for their refusal to obey the Fugitive Slave Acts.

This building was once the home of Captain Samuel Barry, a local abolitionist, who used it to shelter runaway slaves as part of the Underground Railroad. Captain Barry was arrested for violating the federal Fugitive Slave Act of 1850, although he was never convicted. The photos are a historic view (right) and as the home is viewed today (left).