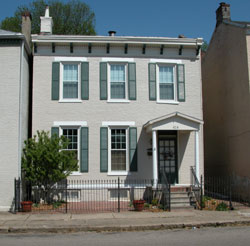 During the 1800s, thousands of enslaved Africans sought their freedom through various means of escape. Some left without any assistance from others, some found help, only when needed, by individuals along the route who had no connection to others, and still others utilized a system we have come to know as the Underground Railroad. The term is vague and no one is sure exactly where it derived. There is a tale of a Kentucky plantation owner, who with a bounty hunter was following a fugitive. The fugitive was able to find a boat at the banks of the Ohio River, but the plantation owner could not find a skiff. After some time, he eventually found one, but by the time he had crossed the river at Ripley, OH the fugitive had disappeared. In an exclamation of distressed he said the fugitive must have escaped on some underground road.

The Underground Railroad is the symbolic term given to the routes enslaved African Americans took to gain their freedom as they traveled. Sometimes the routes went north to Canada or south to Mexico and Florida. Some went east, and still others traveled west to live in the western states. Free Blacks, Whites, Native Americans and former slaves acted as conductors by aiding fugitive slaves to their freedom.

It simply meant the system by which slaves found help and freedom from slavery. The UGRR is not a railroad, a road, or a specific route. It is more of a group of unrelated people with the single cause of helping free slaves. In general, the UGRR was NOT tunnels, hidden rooms, or secret passages. They were people allowing Blacks into their homes and offering what assistance they could.

At first, we thought three main routes were created.

With extensive research, now we are finding there was not one route. It was more of a web of potential paths, hiding places, help, and betrayal.

How can study of the UGRR be educational?

While there are hundreds of Hoosiers who helped fugitives find their way to freedom, some Hoosiers aided in the capture of these fugitives. Through the State of Indiana’s Underground Railroad Initiative, we are trying to locate all the people who impacted the lives of the fugitives. By researching this history, we are telling a more complete story of Indiana. As the research is completed, historical reports are being produced, workshops are being hosted, and educational materials being created so that Hoosiers can learn more about this aspect of our history.

The DHPA administers a public outreach program to foster research, identification, and protection efforts for the state's Underground Railroad resources. The goal of this program is to identify the sites, people, and events associated with Underground Railroad activity in Indiana. To this end, the DHPA partners with the National Park Service (NPS) to support their National Network to Freedom Program and with local organizations and individuals who contribute countless hours of volunteer research that are vital to keeping this program moving forward.

Through the Underground Railroad Initiative, the DHPA conducts a number of educational, training, and outreach programs for the public. The Division staff also advises and assists local historical groups and individuals with research activities and provides technical support for the preparation of nominations to the National Register of Historic Places and the National Network to Freedom.

The DHPA works with institutions that house Underground Railroad collections and directs researchers to these repositories. In addition, the DHPA has begun an inventory of the research available to the general public and maintains a bibliography of primary and secondary resources including books, newspapers, and websites about the Underground Railroad. In addition, we now offer an online PDF version of the Dr. Wilbur Siebert UGRR information index. Dr. Siebert's Indiana papers are housed at the Indiana State Library.