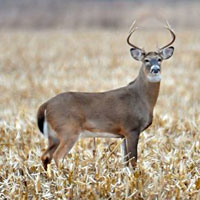 White-tailed deer (Odocoileus virginianus) are Indiana’s only representative of the family Cervidae, which includes mule deer, elk and moose. Deer are common throughout Indiana, as they are very adaptive and can thrive across a wide range of landscapes and habitat conditions.

History of white-tailed deer in Indiana

The successful reintroduction of white-tailed deer and success in growing the population was funded through the sales of hunting and fishing licenses fees and funds from the Pittman-Robertson Act.

The annual deer breeding cycle (rut) is triggered by the length of days shortening in fall. The breeding season spans several weeks, beginning as the first few does in the population come into estrus (are receptive to breeding) and are bred. The number of estrus does gradually increases to a peak. This is termed peak rut. After peak rut, the number of estrus does declines until all deer have been bred.

The white-tailed deer breeding season, or rut, primarily occurs in October and November. Does may breed at 6 to 7 months of age, but generally breed for the first time when they are 1.5 years old. Bucks usually begin breeding when they are 1.5 years old, but there is evidence that some buttons bucks do breed. During the breeding season bucks seek out and chase does until they are ready to breed. Often this leads to conflict between males seeking to breed the same doe who will lock antlers and spar to establish breeding dominance.

Fawns are born in late May or early June after a 200-day gestation period. At birth, fawns weigh 4 to 8 pounds; however they grow rapidly, doubling their weight in just two weeks.

Does hide fawns in cover and only visit them a few times a day to nurse them. When approached by a human or other predator, fawns instinctively lie motionless and lower their heart rate to a third of its normal rate (bradycardia) to avoid detection by predators.

If you find a hidden fawn, NEVER MOVE IT OR ASSUME THAT IT IS AN ORPHAN! Rest assured, its mother is nearby.

As farmers know, deer also readily consume agricultural crops. In localized areas of Indiana, deer crop damage, particularly corn and soybeans, is a problem. Farmers with damage problems are encouraged to work with their district wildlife biologist to develop strategies to alleviate damage. Fencing, chemical repellents and noise devices may provide relief in some situations; however, the most effective and efficient deer damage control technique is carefully regulated hunting.

The number of deer in Indiana has increased steadily since their reintroduction in the 1930s. Concerns about deer-vehicle collisions and crop damage by deer led the Division to begin lowering the deer population in selected counties in the 1990s. By 1992, the statewide deer population began to decrease in response to increased harvest of antlerless deer. This was necessary because uncontrolled growth of the deer herd would be disastrous for both the deer and people of Indiana. Damage to agricultural and forest crops would become economically unbearable and the destruction of natural plant communities by sustained deer herbivory would produce smaller, less-healthy deer. In 2017 DNR adjusted its deer management goal to manage deer in a more targeted manner to better balance ecological, recreational, and economic needs of all Indiana citizens in each county.

Hunting is an excellent tool for maintaining a stable deer population while annually providing outdoor recreation opportunities and fresh venison to over 200,000 Hoosiers.

Hunting and other outdoor recreation activities are primary industries in our scenic counties and are important for these economies. The total annual deer harvest steadily increased from 1951 until the mid 1990’s and has now leveled out with about 115 thousand deer taken annually.