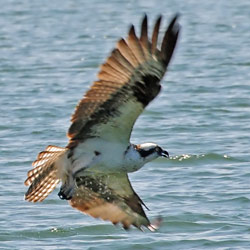 The adult is blackish-brown above and white below; the breast is white or sometimes shows a brown band (especially in females). The head is mostly white with a broad black stripe extending from the eye to the back. Bill and talons are black and eyes are yellow to orange. Ospreys range in size from 21" - 25" long with a wingspan of 59"- 67". Females are about 10 percent larger than males weighing from 2.5 - 4.25 pounds while males weigh 2.25 - 3.75 pounds.

Immatures are similar to adults except the upper feathers have light edges, while the underparts are buffy.

Ospreys are primarily found along streams, rivers, lakes and reservoirs where they forage for fish.

The osprey’s main prey is fish. This bird is the only raptor to plunge into the water for prey. Usually, the osprey will hover 30 - 100 feet above the water watching for fish. When a fish is spotted, the osprey dives feet first into the water and is often momentarily under the surface of the water. Once capturing the fish, the osprey leaves the water, shakes the water from its feathers and positions the fish in its talons so that the fish’s head faces forward. This decreases wind resistance as the osprey flies. Ospreys are reported to be able to carry up to 2.25 pounds, but most fish are in the 0.5 lb. range and are 5-15" in length. Ospreys occasionally eat rodents, birds, small vertebrates and crustaceans. To feed their young, adult ospreys tear off small pieces of fish when the chicks are very young and adjust size as they get older. A brood of three chicks requires nearly two pounds of fish daily.

The osprey’s method of catching prey calls for some adaptations not found in more terrestrial hawks. The osprey’s feathers are slightly oily to limit water absorption. The shank of the leg is scaled, not feathered, with short, dense feathering on the thighs. The pads of the toes are covered with spicules (small spikes) for grasping slippery fish. The osprey also has a reversible outer toe that can either be at the front of the foot or moved to the back for a two-toe-forward, two-toe-back formation for carrying fish.

Ospreys build nests near the water, 10 - 60 feet above the ground near the tops of trees. They can also nest on the ground or on cliffs and use a variety of structures, including utility poles, cranes, cell phone towers, channel markers, and duck blinds. The nest is built of sticks and lined with grasses, seaweed, moss, lichens, bark, and even mud. These raptors return to the same nest each year and add to it. Adults defend the nest, often attacking intruders. Ospreys nest singly or in loose colonies.

Average clutch size is 3, range is 2-4. Eggs are 2.5" x 1.75" in size and are white or buffy in color with heavy brown or reddish-brown spotting. The female is the primary incubator. Incubation lasts 37-38 days.

The osprey is one of the most widely distributed birds in the world, found on every continent except Antarctica. The population declined rapidly in the 1950s - 1970s due to DDT, loss of breeding grounds and poaching. The ban of DDT in combination with statewide conservation programs, including the use of artificial nesting platforms, helped the population regain its footing. In Indiana, the osprey is a species of special concern. 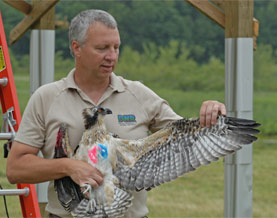 From 1930 to 1975, osprey nesting was only noted in four counties in Indiana: Morgan, Parke, Porter and Posey. At the beginning of the 21st century, osprey populations in the Midwest had been growing slowly, but nests were widely scattered. Reintroductions enhanced local and regional populations. From 2003 to 2006, DFW wildlife biologists obtained 96 young ospreys from nests in coastal areas of Virginia and raised and released them at four locations in Indiana: Jasper-Pulaski Fish & Wildlife Area, Tri-County Fish & Wildlife Area, and Patoka Lake. Each site received eight birds in June of three consecutive years. Birds were held for one to five weeks and released from mid-June to mid-July. Locally obtained fish (primarily gizzard shad, carp, white sucker and yellow perch) were provided at release sites as late as early September. As a result of this effort and the installation of nesting platforms in a partnership between the Indiana DNR and private groups and individuals, Indiana’s osprey population has shown steady growth.

In 2018, after more than 3 years of at least 50 nest territories, the Osprey was down-listed from state endangered to special concern. In 2020, over 100 Osprey nests were found in Indiana. This is a great success story and one that speaks to the value of diverse partnerships, the Indiana Nongame Wildlife Fund and the State Wildlife Grant program.

Chronology of osprey nesting in Indiana

Have you seen an osprey nest?

New osprey nest locations and status updates to known nests are currently collected with the help of citizen scientists, who report nests to DNR biologists. Report active osprey nests and updates on breeding activity (e.g. nest building, incubation, food deliveries, and begging chicks) to dfw@dnr.IN.gov. Please observe nests from a distance of 330 feet, which is roughly the length of a football field.

Are you a paddler?

Osprey monitoring in Indiana is funded, in part, by citizen donations to the Indiana Nongame Wildlife Fund. To support this project and others like it, visit our donate page.