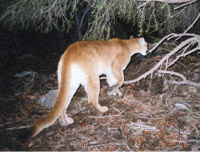 Photo from National Park Service. The mountain lion (Puma concolor) is sometimes called cougar, puma, catamount, and panther. Mountain lions once lived in much of the eastern United States. They were extirpated from Indiana by the late 1800s.

Indiana has no breeding population of mountain lions. However, data collected by the Cougar Network and other states over the past decade suggest mountain lions are appearing outside their traditional Western range. This may be the result of an increase in mountain lion numbers in Western states. Animals found outside of their Western range are usually young, transient males.

The mountain lion is a large, slender cat, with a long rope-like tail. Adults are a uniform tan or tawny in color, with a white or cream-colored chin, undersides and inner legs.

Bobcats, feral cats and domestic dogs may be misidentified as mountain lion. Below is a list of physical characteristics that distinguish mountain lions from more common species.

NOTE: Use of optics (binoculars or scopes) can magnify an animal's size.

If you encounter a mountain lion

The prospect of mountain lions alarms many citizens; however, the likelihood of encountering a mountain lion in Indiana is remote. The same is true even in Western states with breeding populations because these are reclusive animals. There is little likelihood for this animal to be seen in large cities, neighborhoods and other areas where there are humans.

If an encounter does happen, follow this advice from authorities in Western states:

How to report a mountain lion sighting in Indiana

Seeing a mountain lion in Indiana is unlikely; bobcats and domestic cats are often misidentified and reported as mountain lions. Be sure to factor in the size of items or vegetation near the animal you observed to help estimate the observed animals' size. Indiana DNR can confirm reports that include a clear picture of a mountain lion in a verifiable location; a picture or plaster cast of mountain lion tracks with measurements; or other evidence of specific mountain lion behavior. To report a mountain lion sighting or encounter use the Report A Mammal form.