The badger is a member of the weasel family and is best known for its digging. Its powerful forelegs and long claws allow it to easily dig ground squirrels and gophers out of their burrows and to dig extensive burrows of its own. Roadways, humans, and packs of dogs are the chief predators of badgers in Indiana, but coyotes may take a few young each spring. 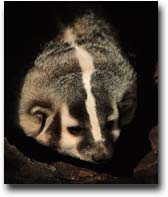 Badgers are solitary except during breeding season. Badgers mate in July and early August, but the young do not start developing within the mother's body until February. This is known as delayed implantation. In early spring, a litter of two to five young are born in a grass-lined burrow. Once the young are weaned, they begin to venture outside their burrow on hunting trips. In the fall, after the young have learned to hunt for themselves, they disperse.

Badgers are carnivores, and their primary foods include:

Badgers will also scavenge carcasses and have been known to store leftovers in a cache to be dug up later.

Indiana is at the eastern edge of the badger’s geographic range. Badgers prefer an open, prairie-type habitat with well-drained soils, but may live anywhere with the right soil, even in agricultural land or forests. Badgers are more commonly found in the northern half of Indiana; however, they have now been reported from nearly 80 Indiana counties, including Posey County to the south. Currently, the most common type of badger sightings comes through reports of roadkill. At this time, little is known about the abundance of Indiana’s badger population, though the population had been expanding from the 1950s through the early 2000s.

Badgers are classified as a Species of Special Concern in Indiana and are protected by state law.
Badgers are typically not aggressive unless provoked. Always give a badger space and keep pets leashed or in a kennel with a secure top when outside to prevent negative encounters with any wildlife, including badgers.

Badgers can be helpful because they consume a variety of small mammals that invade homes and barns, but are sometimes considered a problem because of their digging habits. Landowners or lessees can talk to their district wildlife biologist or hire a nuisance wildlife control operator if a badger is causing problems, because special permits are required before a badger can be removed.