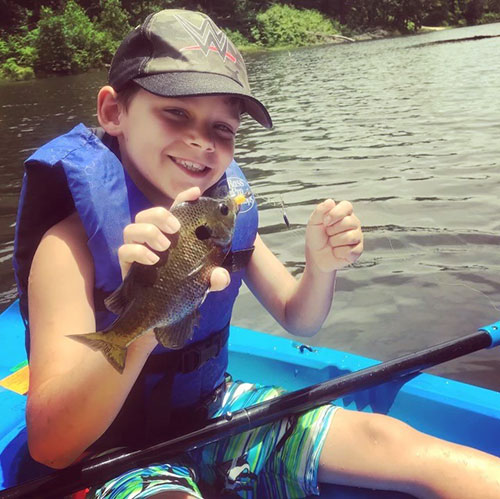 Sunfish are a diverse group of fish and Indiana is home to 10 individual species (Lepomis spp.). Bluegill (Lepomis macrochirus) and redear sunfish (Lepomis microlophus) are the two most fished for sunfish in Indiana. They are found in most Indiana waters, including midsize streams, small ponds, lakes, and large rivers.

Bluegill put up a vigorous fight and are exciting to catch on light tackle. They are also one of the easiest fish for beginners as they are located virtually everywhere and can be brought in on children’s fishing poles. Fishing from a fixed location with worms, crickets, or insect larvae (bee moths, spikes, mousies, wigglers) is a very popular and effective method of catching bluegills. At certain times of the year, such as when aquatic insects are emerging or bluegill are spawning, fly fishing with wet flies, dry flies, or poppers is also very effective. Since they have small mouths, anglers should use small hooks (size 8, 10, or even smaller) to catch bluegills. Many people also ice fish for bluegill.

Sunfish are a delicious fish that are easy to catch and clean. Sunfish are one of the “safer” fish to eat in Indiana as they are less fatty. Please consult the fish consumption advisory for more information.

Different sunfish species spawn at slightly different times but all reproduce using nests that are built by males. Almost any type of bottom material may be used for nesting but gravel is preferred. The male constructs a nest by fanning away the sediment with his tail to form a shallow depression in the bottom, known as a bed.

Bluegill and redear sunfish are the most fished for species in the state. Anglers play a key role in the management of bluegill, as they can reproduce quickly. When fish deaths, natural or by fishing, are too few, bluegill can become overpopulated. This results in lots of smaller fish and is referred to as a stunted population. In other instances, anglers can harvest too many large bluegill, resulting in a population with few large individuals. 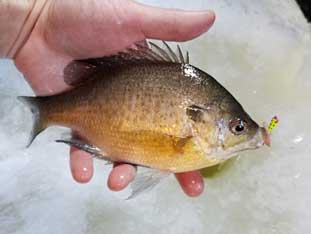 Several Midwest states have implemented statewide daily bag limits on bluegill with mixed success. The most common bag limit is 25 bluegills, which Indiana implemented statewide in 1961. However, this limit was repealed in 1970 based on research from other Midwest states that demonstrated overfishing of bluegill was not a concern for most lakes. Several other states have reduced the bag limits to 10 or 15 bluegill since most anglers harvest many fewer than 25 bluegills. Indiana angler surveys have found similar results with 89% and 98% of anglers harvesting fewer than 25 bluegill in reservoirs and glacial lakes respectively.

Best places to fish for sunfish