Largemouth bass (Micropterus salmoides; hereafter referred to as largemouth) are generally olive green overall with a cream-colored belly and a series of black blotches that form a line along the side. Its upper jaw extends beyond the rear part of the eye and has no tooth patch present on the tongue. The dorsal fin (fin along the backbone) is nearly separated and has spiny and soft sections.

Largemouth can be found in nearly all Indiana waterbody types including ponds, lakes, reservoirs, streams, and rivers. Juvenile largemouth eat crustaceans, insects, and insect larvae, while adults primarily feed on fish, crayfish, and large insects. Indiana largemouth typically grow 3 to 4 inches per year for the first three years, then 1 to 2 inches per year through age 8, and less than 1 inch per year after age 8.

Largemouth begin spawning in the spring after the water temperature has reached approximately 65°F. Nests are built by the males in water anywhere from 1 to 15 feet deep but are typically located in water less than 5 feet deep. Almost any type of bottom may be used for nesting, but gravel is preferred. The eggs are fertilized by the male as they are deposited onto the nest. The eggs typically hatch in three to four days depending on water temperature. The fry begin to feed five to eight days after hatching and remain in a tight school until 26 to 31 days after hatching (when they are about one inch long). The male largemouth remains near the schooling fry, protecting them from predation. 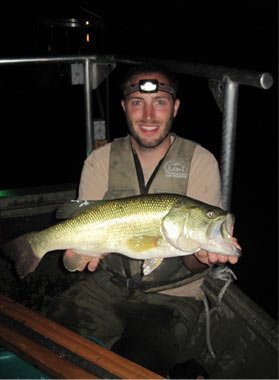 DNR fisheries management staff completing a nighttime electrofishing survey at Little Long Lake (Noble County). Largemouth prefer warm, moderately clear waters that do not have a noticeable current. Aquatic vegetation and woody debris are necessary components of high-quality habitat for largemouth. The littoral zone is the shallow nearshore area where there is enough light for aquatic vegetation to grow. Approximately half of a typical Indiana glacial lake littoral zone contains submerged aquatic vegetation, while vegetation is less prevalent in reservoirs.

Indiana Department of Natural Resources (DNR) fisheries biologists manage largemouth in public waterbodies by evaluating data collected during fisheries surveys and angler creel surveys to determine if management actions are required. Since 2010, fisheries biologists have completed more than 200 general fish community and targeted largemouth surveys to monitor populations. Creel surveys indicate that largemouth are one of the most popular sportfish among Indiana anglers. In fact, approximately one-third of all Indiana anglers target largemouth. Fishing tournaments for largemouth are also popular on Indiana waterbodies. Fishing tournaments on DNR properties with 15 or more watercraft are required to obtain a fishing tournament permit.

The majority of largemouth in Indiana waterbodies fall under three statewide black bass regulations; however, there are special regulations on a select group of waterbodies. To learn more about largemouth regulations, visit the Fishing Guide and Regulations webpage.

State Record Fish and Fish of the Year Program