In 2011 a fungus called boxwood blight (Calonectria psuedonaviculata; Synonyms Cylindrocladium psuedonaviclatum or Calonectria buxicoloa) was found in North Carolina. Since then it has spread to 24 states, including Indiana where it was found in December of 2018.

The exact origin and source of the introduction of this disease to the U.S. is not known. There have been multiple interceptions at garden centers and on Christmas decorations in the state.

Boxwood blight appears as small, black spots present on the leaves and stems of infected boxwoods. There are other diseases that can look similar, but boxwood blight is distinguished by producing rapid defoliation of infected plants resulting in death. Fungal spores are viable in soil for five years.

The best approach to this pathogen is to prevent its introduction into the landscape. Preventive treatments are available, but these treatments are only designed to protect your plants from becoming infected with the fungus.

All boxwoods, Pachysandra and sweet box are susceptible to boxwood blight. The fungus can be transported on symptomatic and asymptomatic plants. A one-month latency period may occur before plants show symptoms, however once symptoms develop it is too late to save them.

Early detection of this disease is critical to reduce economic impact. Homeowners are encouraged to report suspicious plants. If your boxwoods develop sudden leaf drop: contact your local Purdue Cooperative Extension agent or the DNR, Division of Entomology and Plant Pathology at 1-866-NOEXOTIC. 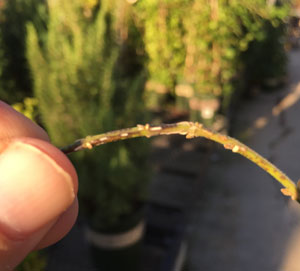 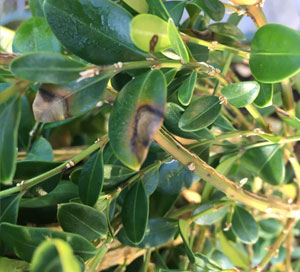