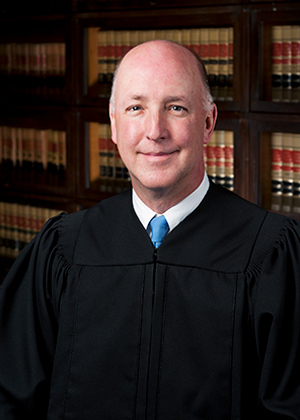 Mark S. Massa was appointed to the Indiana Supreme Court by Governor Mitch Daniels in March 2012. He was retained by voters in 2014.

He is a native of Milwaukee, Wisconsin, and came to Indiana in 1979 to attend Indiana University. He graduated from IU in 1983 with a degree in journalism, and after internships at the South Bend Tribune and Milwaukee Sentinel, he joined the staff of The Evansville Press, where he was an award-winning sportswriter and covered the courts and local government. In 1985, he became a deputy press secretary and speechwriter for Governor Robert Orr; he later graduated from the evening division of the IU McKinney School of Law, clerked for Indiana Supreme Court Chief Justice Randall Shepard and joined the Marion County Prosecutor’s Office in Indianapolis. After serving as a Deputy Prosecutor for 15 years, including 7 years as Chief Counsel to Prosecutor Scott Newman, Justice Massa was an Assistant United States Attorney in the Southern District of Indiana, where he earned the Inspector General’s Integrity Award from the Department of Health and Human Services. He served as General Counsel to Governor Mitch Daniels, chaired the Alcohol and Tobacco Commission, served on the Indianapolis Marion County Police Merit Board, and was Executive Director of the Indiana Criminal Justice Institute prior to his appointment to the Court.

Justice Massa's chambers may be reached by contacting his Judicial Assistant Jessica S. Hughes at 317-232-2550 or jessica.hughes@courts.in.gov. All media inquiries should be directed to the Chief Public Information Officer Kathryn Dolan at 317-232-2542 or kathryn.dolan@courts.in.gov.