What do celebrities, cryptocurrency, and crime all have in common? Twitter. Earlier this month, July 15 to be exact, several famous Twitter users had their accounts hacked by scammers who sent out fake tweets asking followers to send money using Bitcoin – a type of cryptocurrency.

We’ve discussed cryptocurrency and related scams before in this blog, but for the TL;DR (too long; didn’t read) version, cryptocurrencies are digital assets created by companies or individuals that take the form of a virtual coin or token. They are largely unregulated, uninsured, and untraceable. This makes cryptocurrency incredibly popular with criminals.

You can learn more about how cryptocurrency works by watching this video from the New York Times. 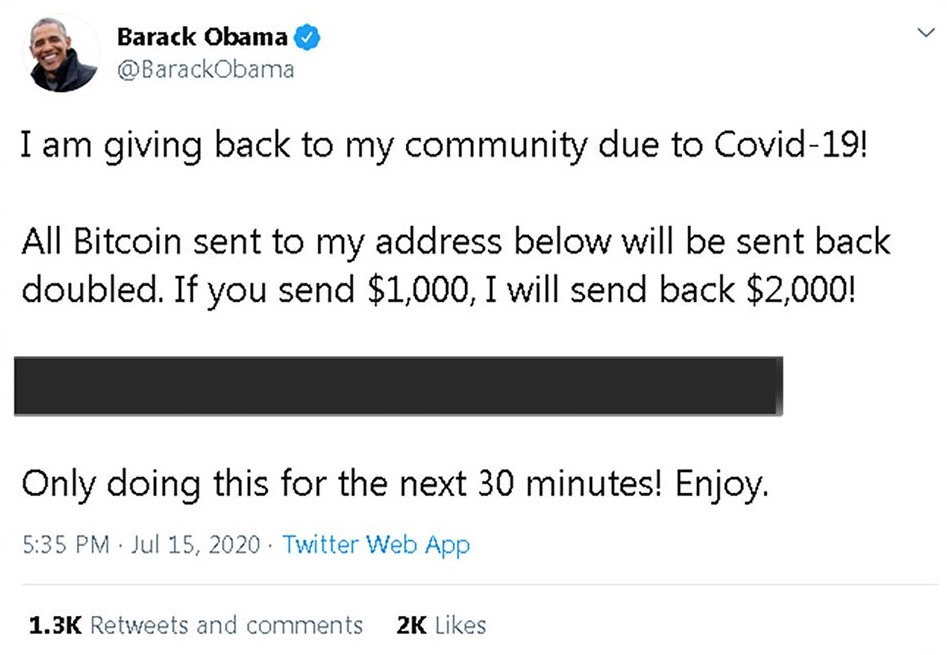 Cryptocurrency scams are a popular way for scammers to trick people into sending money. While the Twitter hack targeted high profile users, including Democratic presidential candidate Joe Biden, former President Barack Obama, and Tesla CEO Elon Musk, there’s a good chance you will encounter such scams as well. They often appear as emails trying to blackmail someone, as online chain referral schemes, or as bogus investment and business opportunities.

In the case of the Twitter hack that targeted verified accounts of celebrities, scammers received 400 payments in Bitcoin, totaling $121,000. Considering the number of followers that the targeted Twitter members have, it’s a relatively small amount of money that was lost. Twitter addressed the hack quickly, shutting down all verified accounts for several hours.

Twitter founder and CEO Jack Dorsey called it a “tough day for all of us at Twitter,” and believes it was a social engineering attack that started by targeting Twitter staff with administrative access. High level admins at Twitter have the ability to take control of verified accounts and tweet on their behalf. Dorsey said, “We’re looking into what other malicious activity they may have conducted or information they may have accessed.”

Cryptocurrency scams have been on the rise for years now, setting a record in 2019 with scammers making more than $4.3 billion worth of cryptocurrency. That’s triple what scammers earned in 2018, and 2020 appears to show continued growth. You can read more about 2019 cryptocurrency scams by reading the 2020 State of Crypto Crime report. One of its more interesting findings is that the vast majority of criminals’ earnings came from Ponzi schemes, which accounted for 92%.

Here’s what all cryptocurrency scams have in common:

If you see a tweet, text, email, or social media message telling you to pay with Bitcoin or other form of cryptocurrency… IT IS A SCAM! If you spot a cryptocurrency scam, report it immediately to the Federal Trade Commission.