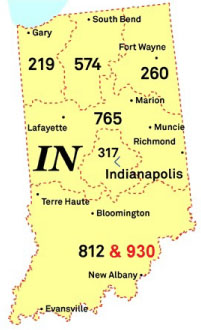 Indiana’s new 930 telephone area code was introduced in March 2015. It now “overlays” the entire 812 area code that had been largely unchanged since 1947.

To make room for the new area code, ten-digit dialing for local calls is now in effect for the 812 area.

Most area codes that existed throughout the United States and Canada in 1993 have needed the addition of new codes because wireless phones, other competitive services and new technologies have used up the original number supplies. The vast majority of new area codes added since 2005 have used the overlay approach, including the new 364 area code in western Kentucky (which was recently added to the 270 area) and the new 463 area code (which was added to central Indiana's 317 area in late 2016).

On July 31, 2013, the IURC approved the use of an overlay for 812. It ultimately extended the effective date for mandatory ten-digit dialing to February 2015.

Consumers in the 812/930 area are now required to dial ten digits (area code + number) for local calls, rather than the seven-digit dialing that’s now in place.

Q: What changed the least?
A: All consumers with 812 numbers are keeping them. And area code changes do not change rates or local calling areas.

Q: How is the overlay more convenient than a geographic split?
A: Consumers do not need to have wireless phones reprogrammed with a new area code. Also, businesses, schools, government agencies, not-for-profit organizations, and other entities are not as likely to need new signage, stationery and advertising with the area new code.

Q: Can’t a new area code apply only to wireless phones or only to landlines?
A: No. A 1995 FCC order forbids area codes from being applied to specific technologies, citing that doing so could put certain technologies at a competitive disadvantage.

Q: Was anything done to keep these changes from being needed?
A: While the addition of new area codes has been inevitable for most of North America, number conservation efforts have prolonged the life spans of many area codes. Years ago, the 812 area code was projected to exhaust its number supply by 2004. But conservation efforts by the state and the telecom industry successfully delayed that by a decade.

Q: How long will it be before southern Indiana needs any more area code changes?
A: The 930 and 812 area codes are projected to need no additional changes for another 71 years.

Q: Will ten-digit dialing raise my telephone rates?
A: Calls that were free before the transition are still free. Also, local calling areas are not affected by area code changes.

Q: Where else has this happened?
A: 39 states, including Indiana, have implemented new area codes within the last two decades or are doing so now. Central Indiana’s 317 area code was split in 1996, with the 219 area code in northern Indiana requiring the addition of new codes in 2001. All of Indiana’s neighboring states have implemented new area codes through overlays. Four states (Connecticut, Maryland, Oregon, and West Virginia) have statewide ten-digit dialing, with a fifth (Idaho) now implementing it.

Q: How common is the overlay concept, nationwide?
A: All new area codes implemented in the United States since 2008 have used the overlay method.

Q: Will other parts of Indiana need new area codes in the near future?
A: Yes. The 317 area code, in Indianapolis and most of its suburbs, will transition to ten-digit dialing later this year.