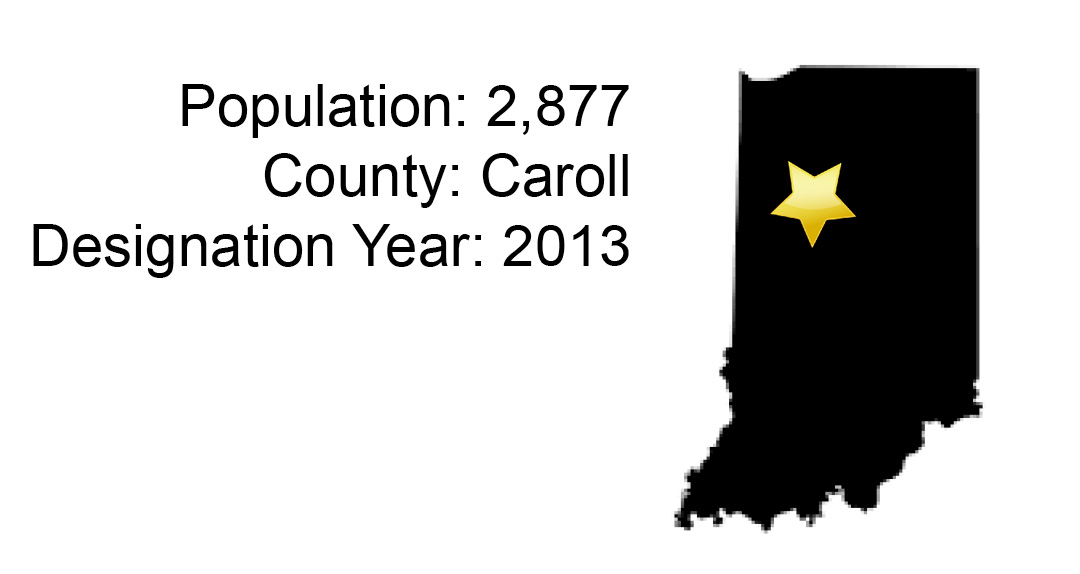 From the Wabash and Erie River to the historic downtown, Delphi shows off its rich history through a variety of community assets including a world class interpretive museum that draws visitors to experience what life was like along the river in the mid-1800s. However, they knew that in a changing world, they needed to offer more. In 2011, they submitted their first application for Stellar before being awarded in 2012. At the time, a new highway was being built adjacent to the town that would diminish the frequency of travelers through their downtown. Using Stellar as a catalyst, they pushed themselves to pursue projects that attracted new audiences while improving on the quality of life for the preexisting residents. Overall, they sought to embody a new vision – “Storied past, Stellar future.”

With such a rich history, Delphi initially struggled to focus on just one goal in their Stellar plan. Anita Werling, the city’s historical preservation director, said that, in her opinion, one of the reasons that Delphi wasn’t designated in 2011 was due to a scattered area of focus.

For the 2012 application the city hired HWC engineering to help redirect their plans. These changes transformed the scope of work. However, according to Werling, the centerpiece of these projects was the restoration of Delphi’s opera house.

“The opera house has grown into a serious community asset,” Werling said. “An initial revitalization project has turned into a traffic driver in our downtown and has sparked investment into our downtown as well.”

Alongside the opera house, ten other projects have been completed over the course of five years. Each project was selected due to the way that it answered Delphi resident’s responses to their central question: “What
would Stellar mean to Delphi?”

Despite their intent to engage the community throughout the process, Julia Leahy, Delphi’s city planner at the time, said they struggled initially to communicate what was going on in the community. For many, the absence of visual proof in the first few years of the designation was evidence that Stellar dollars were not being utilized.

“At the beginning, there really wasn’t an opportunity to share the plans as broadly as we wanted to. We just ran out of time,” Leahy said. “As we began wrapping up projects and moving through the phases, the community’s attitude really began to change.”

The implemented projects ranged from parking solutions, streetscapes, façade restorations and downtown lofts. Due to their geographically small size, these projects touched a large percentage of residents and transformed their downtown square.

“What other award or designation lets you do $19 million worth of projects in five years? It really gives you the security that you’re not wasting your time,” Leahy said. “Now we see a downtown that is full. I see new people coming into town and enjoying what we have.”

Despite the lack of community support in the early stages, over 85 percent of the downtown store owners participated in Stellar’s façade program. Related to the downtown’s physical transformation, new businesses are moving into the downtown storefronts citing their attraction to the community’s atmosphere.
In retrospect, Leahy said that she would have been more intentional in involving key individuals earlier in the process. Specifically, she would have been more intentional in ensuring the involvement and support of city council members.

“It’s so important to have everyone at the table because invariably there are things that the committee didn’t think about and you have to have buy in from the people who are going to be affected by it,” Leahy said.

Throughout the process, public meetings were held regularly and marketed to specific audiences based on the topics of the meetings. Monthly meetings were also organized for more general topics and updates.

Looking ahead, Delphi hopes to be a full and thriving
downtown. In Leahy’s current position, she’s focused on creating downtown events that drive traffic and promote community engagement. Since Stellar, she’s started a new event – the Indiana Bacon Festival. Since its conception in 2014, it’s grown to attract more than 9,000 individuals to downtown Delphi each year.