About fifteen different species of ticks occur in Indiana. Of these, only three species are normally encountered by people and their pets. These are the American dog tick, Dermacentor variabilis; the lone star ticks, Amblyomma americanus; and the black-legged tick, Ixodes scapularis, (also known as the deer tick or the Lyme disease tick).

Adult ticks over-winter in Indiana, meaning winter temperatures do not kill them. The majority of ticks attached to people during the spring and summer in Indiana are American dog ticks; the second most common species is the lone star tick. The black-legged tick, unknown in Indiana before 1987, is becoming established in more Indiana counties. The remaining ticks are found almost exclusively on wild animals and are only rarely encountered by people.

The slow-moving American dog tick is the largest of these three species. It has short mouthparts, and the female (shown at left) has a creamy, white shield on her back. The male (on the right) is mottled gray and dark brown. The larvae and nymphs feed on small and medium-size wild mammals in the woods and grasslands and are seldom seen. The adults feed on dogs, cats, and humans and are often seen in late April, May, June, and early July. This tick occurs in all of Indiana's 92 counties.

This tick can harbor the Rickettsia rickettsii bacterium, which is responsible for Rocky Mountain Spotted Fever (RMSF) (see photo at left). The major symptoms of spotted fever begin 3-10 days after tick attachment. They include headaches, chills, fever, and muscle aches. One to three days after the fever begins, a rash develops, appearing first on the wrists and ankles and then spreading to the rest of the body. When promptly diagnosed, RMSF can be successfully treated with antibiotics. The patient's recollection of a tick bite is frequently the key factor in a successful diagnosis, treatment, and recovery.

When a prompt diagnosis is not forthcoming, deaths have occasionally occurred. Fatality rates range from 13-25% in untreated cases. Unfortunately, the disease cannot be detected until symptoms are present.

For more information, visit the CDC website at www.cdc.gov/ticks/diseases/rocky_mountain_spotted_fever/

The lone star tick is slightly smaller than the American dog tick but has much longer mouthparts. The female has a single white spot near the center of her back. The males and nymphs are much smaller than the females. All three stages -- larvae, nymphs, and adults -- are quite active and walk fast.

The lone star tick differs from the American dog tick in that all three active stages will attach to humans. The immature stages of the lone star tick are sometimes referred to as "seed ticks" or "turkey ticks", "turkey mites" or even "deer ticks", and will attach to ground-feeding birds and be carried to distant locations. Lone star ticks are very common in southern Indiana, and high populations can be found in Harrison County. Adults appear in late March. Their numbers peak in May and June, declining in July. Nymphs appear in April, peak in May and June, and can be found throughout the summer. Larvae appear in the spring and again in the fall, but are not usually encountered in the middle of the summer.

In addition, lone star ticks infected with Ehrlichia chaffeensis, the cause of human monocytic ehrlichiosis (HME), have been collected in Crawford, Perry, and Orange counties, as well as others. Ticks can only transmit HME if they have fed on deer. Flu-like symptoms of HME include fever, body aches, headache, and fatigue. Symptoms usually occur 5-10 days after being bitten by an infected tick. Human ehrlichiosis can be treated with antibiotics such as tetracycline. For more information, visit the CDC website at www.cdc.gov/ticks/diseases/ehrlichiosis/faq.html

The black-legged tick is the smallest of the three ticks described here. In the picture at the left, black-legged ticks are shown compared with sesame seeds and a dime. The female, the largest, on the left, is oval in shape, mahogany in color, and has long mouthparts. The male, center, is smaller and has shorter mouthparts. The nymph and larva are very small; the nymph is not much larger than the size of the period at the end of this sentence. Adult black-legged ticks appear in Indiana in September, seeking their preferred host, white-tailed deer. They can be found in October and November and on warm days throughout the winter. Nymph activity peaks in June; larvae peak in August. Nymphs appear to be the main vectors of Lyme disease to humans and pets. Adult black-legged ticks are rarely found on humans, but they do feed on dogs and cats.

The black-legged tick arrived relatively recently in Indiana -- the first specimens were collected in Porter County in 1987. Established populations have been found in the northwest quadrant of the state, though they have been found throughout the State.

Lyme disease is a chronic, tick-borne infection caused by the bacterial spirochete, Borrelia burgdorferi. The first case reported in Indiana was in 1983. Symptoms of Lyme disease vary from patient to patient. In approximately 90% of infected people, a rash will develop at the site of the tick bite within one month (see picture at left). This rash, the hallmark of early Lyme disease, begins as a small papule and expands, ranging from several inches to a foot or more in diameter. The rash usually appears reddish but may be pale in the center. It can be flat or raised or even blistered or scabbed. Regardless of whether a rash appears, other symptoms can occur during this acute phase of infection, including fatigue, fever, headaches, swollen glands, and stiffness or pain in the muscles, joints, and neck. If these early symptoms are not treated with the appropriate course of antibiotics, the disease may become disseminated. Medical complications of disseminated Lyme disease can involve the heart, nervous system, and joints.

According to the CDC website, the National Institutes of Health has funded several studies on the treatment of Lyme disease. These studies have shown that most patients can be cured with a few weeks of antibiotics taken by mouth. Antibiotics commonly used for oral treatment include doxycycline, amoxicillin, or cefuroxime axetil. Patients with certain neurological or cardiac forms of illness may require intravenous treatment with drugs such as ceftriaxone or penicillin.

Patients treated with antibiotics in the early stages of the infection usually recover rapidly and completely. A few patients, particularly those diagnosed with later stages of the disease, may have persistent or recurrent symptoms. These patients may benefit from a second 4-week course of therapy. Longer courses of antibiotic treatment have not been shown to be beneficial and have been linked to serious complications, including death.

HOW TO AVOID TICK BITES

The best way to avoid tick bites is to stay out of tick-infested areas, especially during the height of the tick season -- April, May, and June. This is not always possible, so use these precautions:

HOW TO REMOVE TICKS 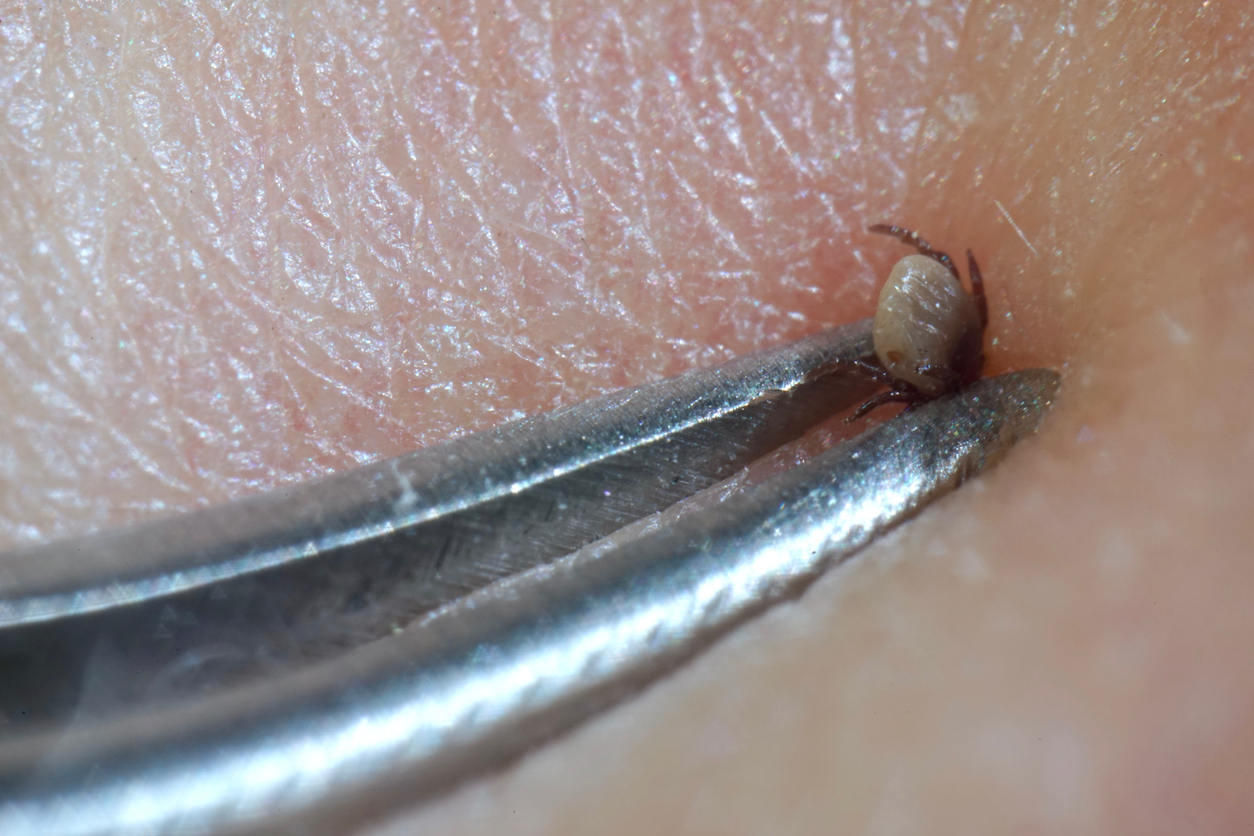 With a pair of tweezers, grasp the tick as close to the skin as possible and pull upward with a slow, even force.

DO NOT JERK OR TWIST THE TICK. This might tear the head and mouthparts from the tick's body.

DO NOT USE YOUR FINGERS TO REMOVE THE TICK. Squeezing the tick could cause it to disgorge the contents of its body into the wound.

DO NOT ATTEMPT TO REMOVE THE TICK WITH CAUSTIC CHEMICALS (such as nail polish remover) OR HEAT. This can kill it before it disengages its mouthparts. It can also cause the tick to regurgitate into the wound, increasing the likelihood of transmitting a pathogen.

WASH THE ATTACHMENT SITE with warm soapy water and rubbing alcohol to remove any pathogens.

Removed ticks should be saved in a zip-top bag labeled with the date and the geographical location where the tick was picked up, and placed in the freezer.

This information will aid the doctor if an illness should develop.