Protect Yourself from Mosquitoes 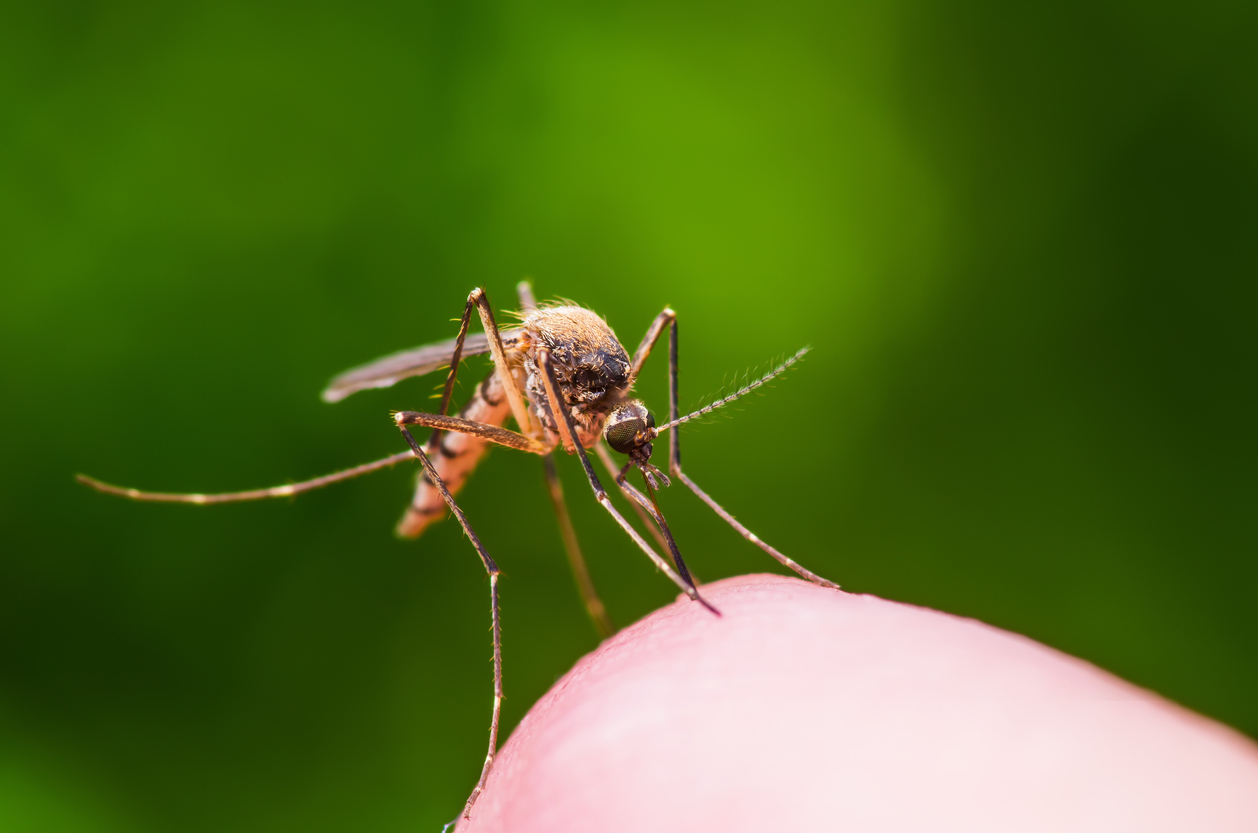 Mosquito season in Indiana runs from May 1 through October 1. Most mosquitoes in Indiana DO NOT come from swamps, rivers, streams, farm ponds, or lakes -- they come from our own backyards. The best protection against mosquitoes and West Nile virus (WNV) is prevention -- prevention of mosquito breeding sites and prevention of mosquito bites. The mosquito vectors are shown here breed in large numbers in human habitats. Here are some things YOU can do to reduce the mosquito population and help protect yourself and your family from the West Nile virus:

Oftentimes, because of their location on private property, sites such as those mentioned above cannot be managed by governmental mosquito control programs. They must be eliminated and managed by the property owner.

For mosquitoes that feed during the daytime, dark-colored clothing is attractive. Their eyesight is poor, and the dark coloring looks like the shadows where they like to hide. Carbon dioxide is an attractant and can be detected by mosquitoes at distances up to 120 feet. When we exhale, we are attracting mosquitoes. At close range, skin temperature and moisture serve as attractants. Floral fragrances from perfumes, soaps, lotions, and hair-care products may also attract mosquitoes.

You can also help prevent West Nile virus infection by not going outside when mosquitoes are biting, and by using mosquito repellents.

A number of repellents are available, but some are more effective than others.  In an article appearing in the Annals of Internal Medicine, Mark S. Fradlin, MD, compared several different types of mosquito repellent: 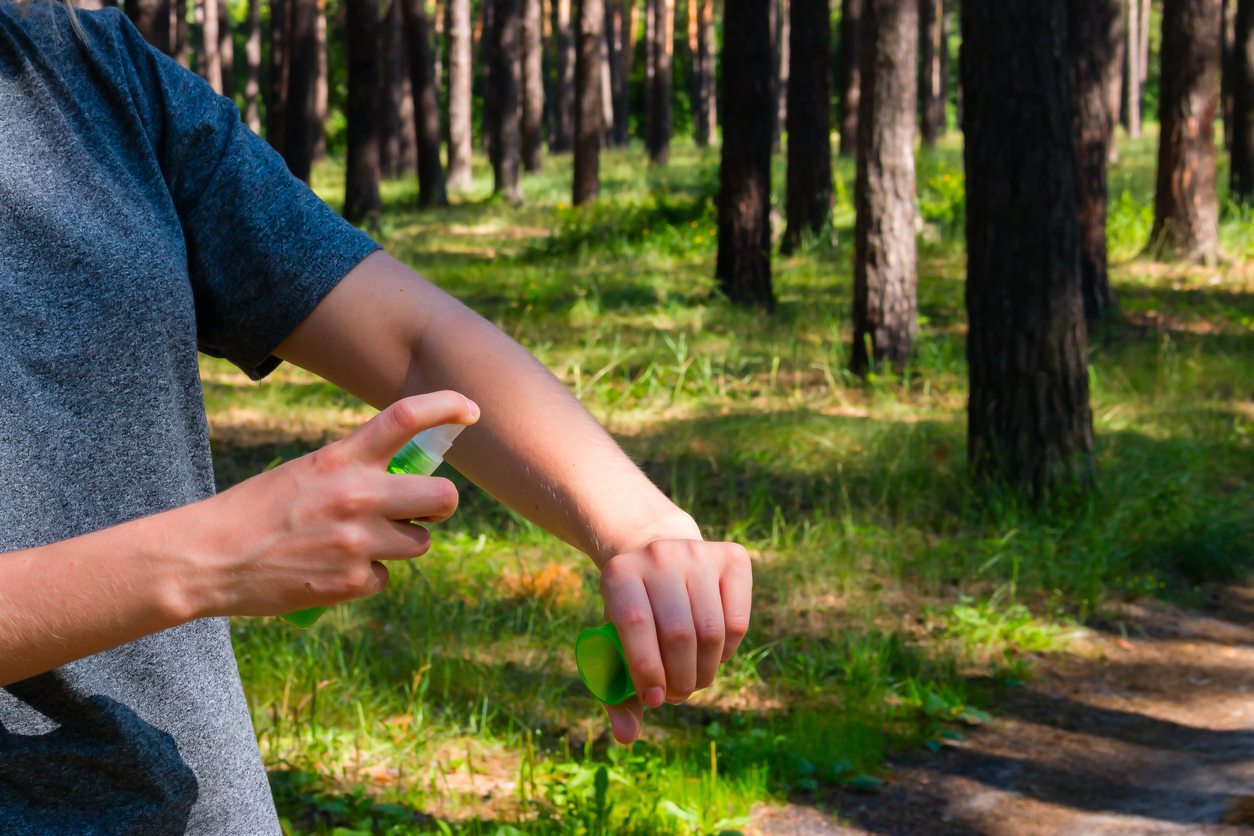 Deet is the most effective and best studied mosquito repellent currently on the market. DEET was discovered and developed by scientists at the US Department of Agriculture and was patented by the Army in 1946. It is a broad-spectrum repellent that is effective against mosquitoes, biting flies, chiggers, ticks, and fleas. It has a remarkable safety profile after over 40 years of worldwide use, but toxic reactions can occur, especially if the product is misused or overused on babies or young children.

In the US, DEET is available in 5% to 100% concentrations. Higher concentrations provide longer-lasting protection. Unfortunately, no guidelines are available to help consumers decide what concentration is appropriate for their specific needs. Products with 10% to 35% DEET will provide adequate protection under most conditions. Products with more than 50% DEET are best used in conditions where insect biting is intense, and where high temperature and humidity may result in rapid loss of repellent from the skin.

Repellents may be applied directly to the skin or to clothing, screens, tents, or sleeping bags. If DEET-treated garments are stored in a plastic bag between wearings, the repellent effect can last for many weeks.

DEET products can damage plastics such as watch crystals and eyeglasses frames, rayon, spandex, other synthetic fabrics, leather, and painted or varnished surfaces. It does not damage natural fibers such as cotton or wool, and has no effect on nylon. 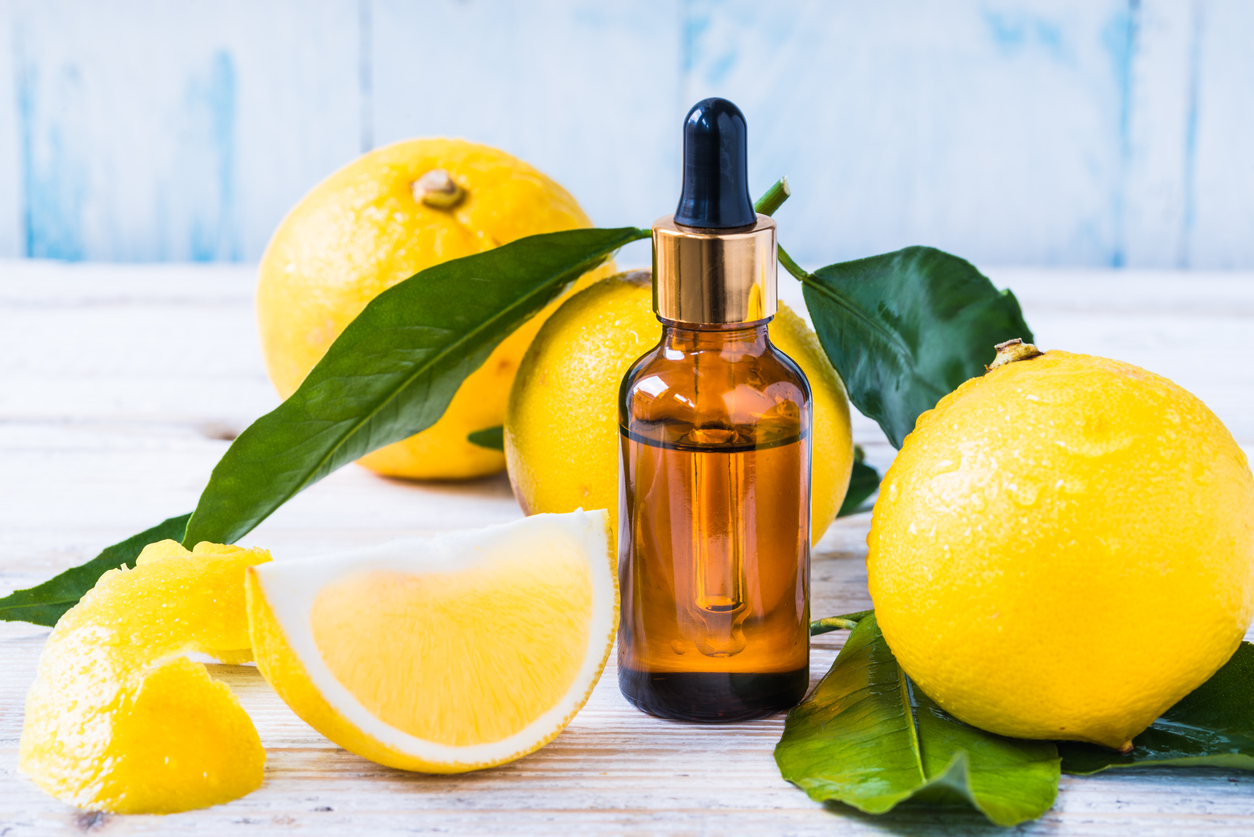 (April 28, 2005) After years of promoting the chemical DEET as the best defense against West Nile-bearing mosquitoes, the government for the first time is recommending the use of two other insect repellents. Repellents containing the chemical picaridin or the oil of lemon eucalyptus offer "long-lasting protection against mosquito bites," the Centers for Disease Control and Prevention said, adding that repellents with DEET remain on the agency's recommendation list. Both products have been available elsewhere in the world, including Europe and Australia, since the 1980s. Consumers tend to like picaridin repellents because they are more pleasant to the skin and don't have the odor that DEET repellents have. And oil of lemon eucalyptus is a natural ingredient, which appeals to those who don't like the thought of putting chemicals on their skin, said Angela Proctor, a product manager for the Cutter line of insect repellents by Spectrum Brands. Spectrum Brands introduced a picaridin-based repellent in January (2005) -- Cutter Advanced (www.cutterinsectrepellent.com) -- and it has been marketing a repellent with oil of lemon eucalyptus since 2002. The products provide four and six hours of protection, respectively, Proctor said. 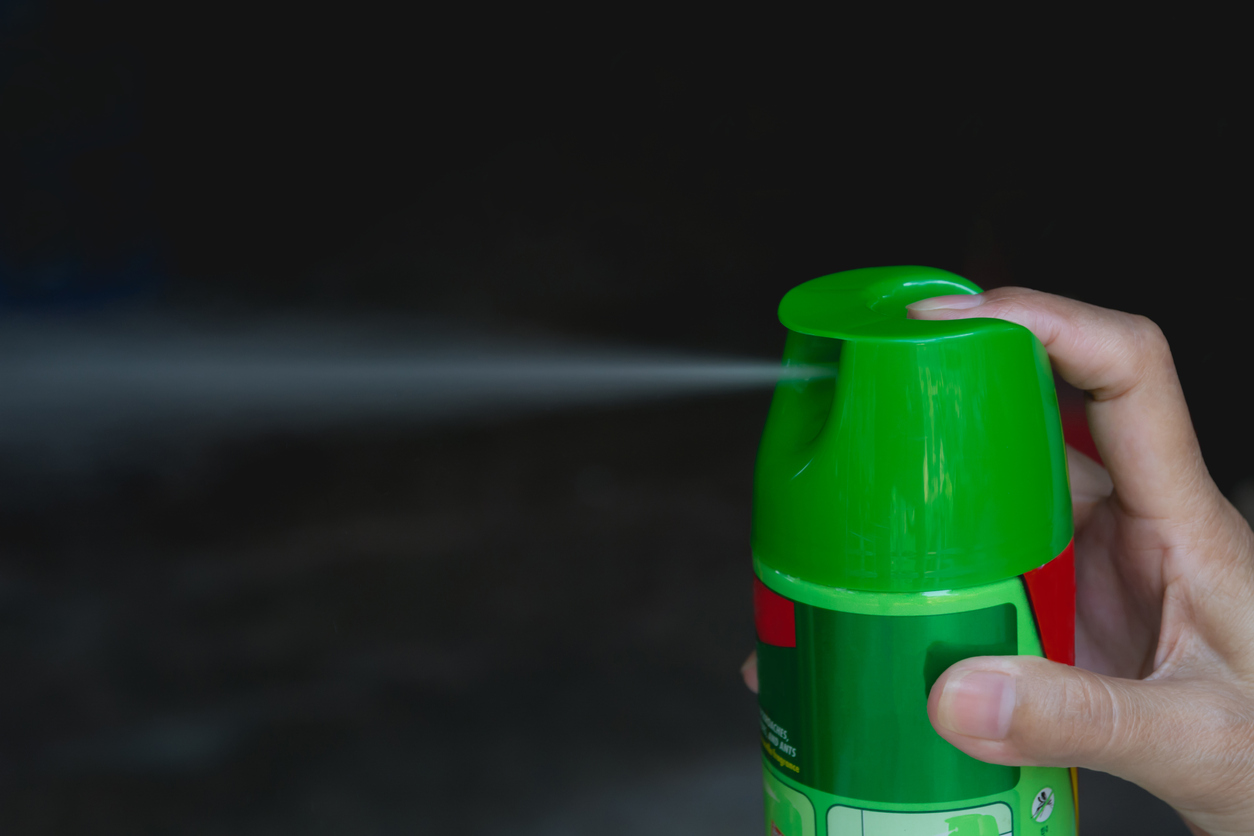 IR3535 has been classified by the EPA as a biopesticide. It has been been available in Europe for 20 years and has been sold in the United States since 1999. This repellent is currently available through the Avon Corporation as Skin-So-Soft Bug Guard Plus IR3535, at concentrations of 7.5-15%, and as Bullfrog's Mosquito Coast, with 20% IR3535. 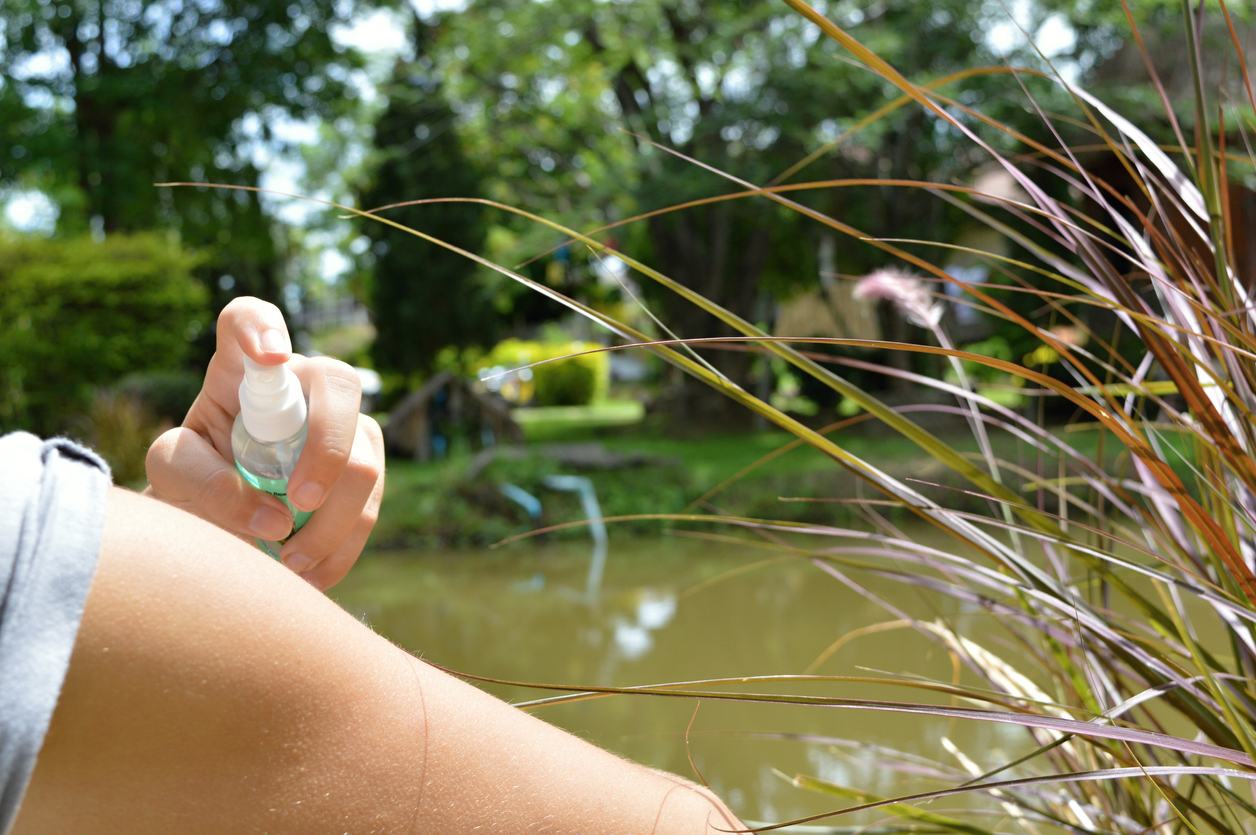 Although not marketed as an insect repellant, consumers have reported Avon's Skin-So-Soft to be an effective mosquito repellent. When tested under laboratory conditions against Aedes albopictus, Skin-So-Soft oil provided 40 minutes of protection from bites, a duration of 10 times less than that of 12.5% DEET. The repellent effect of Skin-So-Soft could be caused by its fragrance, or by the presence of diisopropyl adipate and benzophenone, both which have some repellent activity. 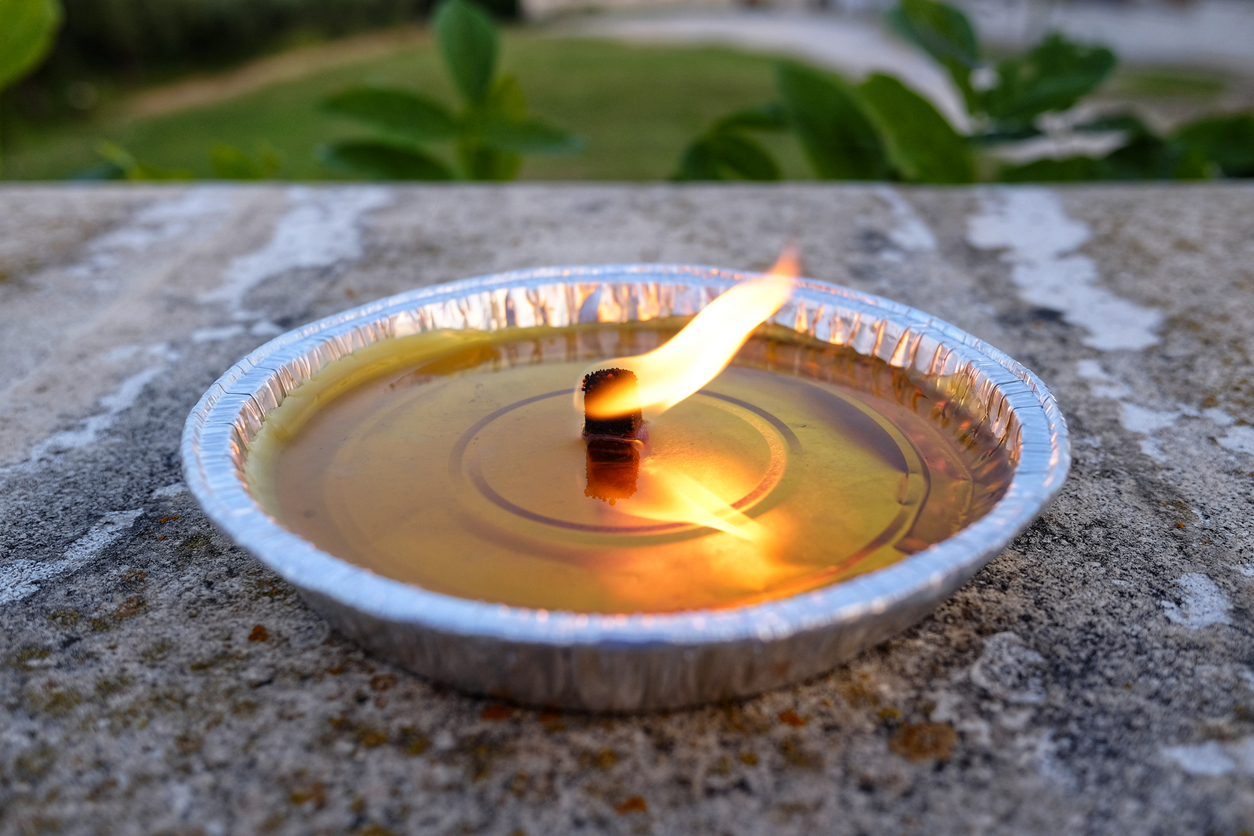 Citronella is the active ingredient found in most "natural" or "herbal" insect repellents. Studies show that citronella can be an effective repellent, but it provides shorter complete protection time than most DEET-based repellents. Frequent reapplication of the oil can partially compensate for this. Buzz Away (Quantum, Inc. Eugene, Oregon) with 5% citronella oil provided an average protection time of 1.9 hours against Aedes species. Repellency was greatest within the first 40 minutes of application and decreased over the remainder of the test period.

Citronella candles have been promoted as an effective way to repel mosquitoes in the backyard. In one study, people near the candles had 42% fewer bites than did the controls, who had no protection. However, burning ordinary candles reduced the number of bites by 23%. 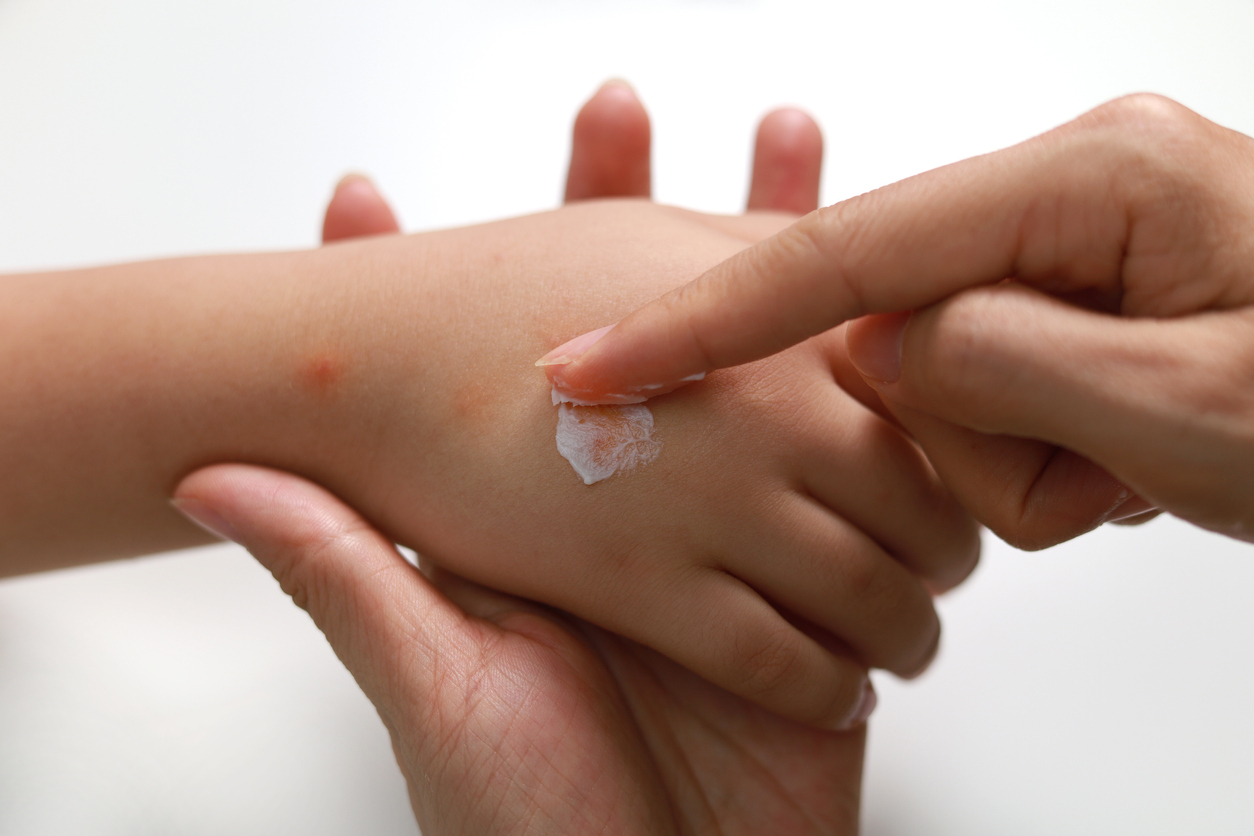 Bite Blocker (Consep, Inc., Bend, Oregon) is a plant-based repellent that was released in the US in 1997. It combines soybean oil, geranium oil, and coconut oil. Studies showed that this product gave more than 97% protection against Aedes mosquitoes under field conditions, even 3.5 hours after application. 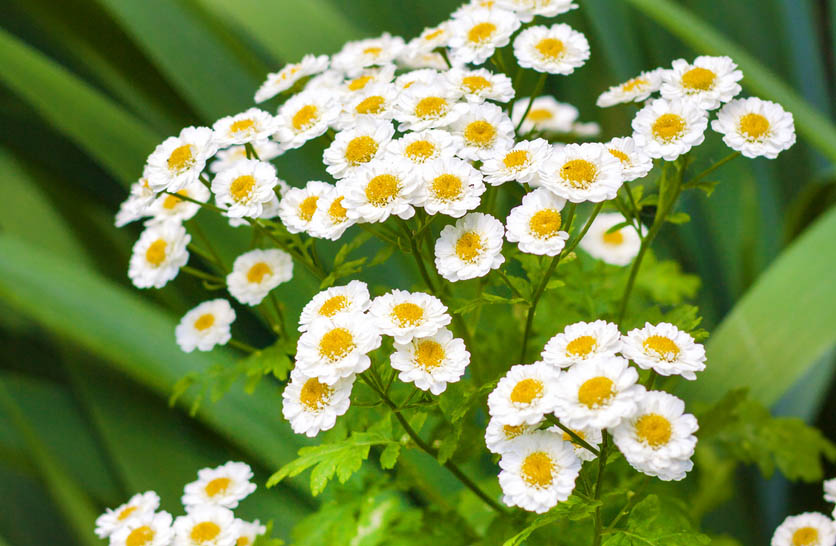 Pyrethrum is a powerful, fast-acting insecticide, originally derived from the dried flowers of the Chrysanthemum cinerariifolium (shown at left). Permethrin is a man-made synthetic pyrethoid. It is a contact insecticide, causing death of the insect. The chemical is effective against mosquitoes, flies, ticks, and chiggers. Permethrin should be applied directly to clothing or other fabrics, not to skin.

The combination of permethrin-treated clothing and skin application of a DEET-based repellent creates a formidable barrier against mosquito bites. In a field trial under intense biting conditions, persons wearing permethrin-treated clothing and a 35% DEET product had more than 99.9% protection over 8 hours. Protected persons received an average of 1 bite per hour, whereas unprotected persons suffered an average of 1,188 bites per hour. 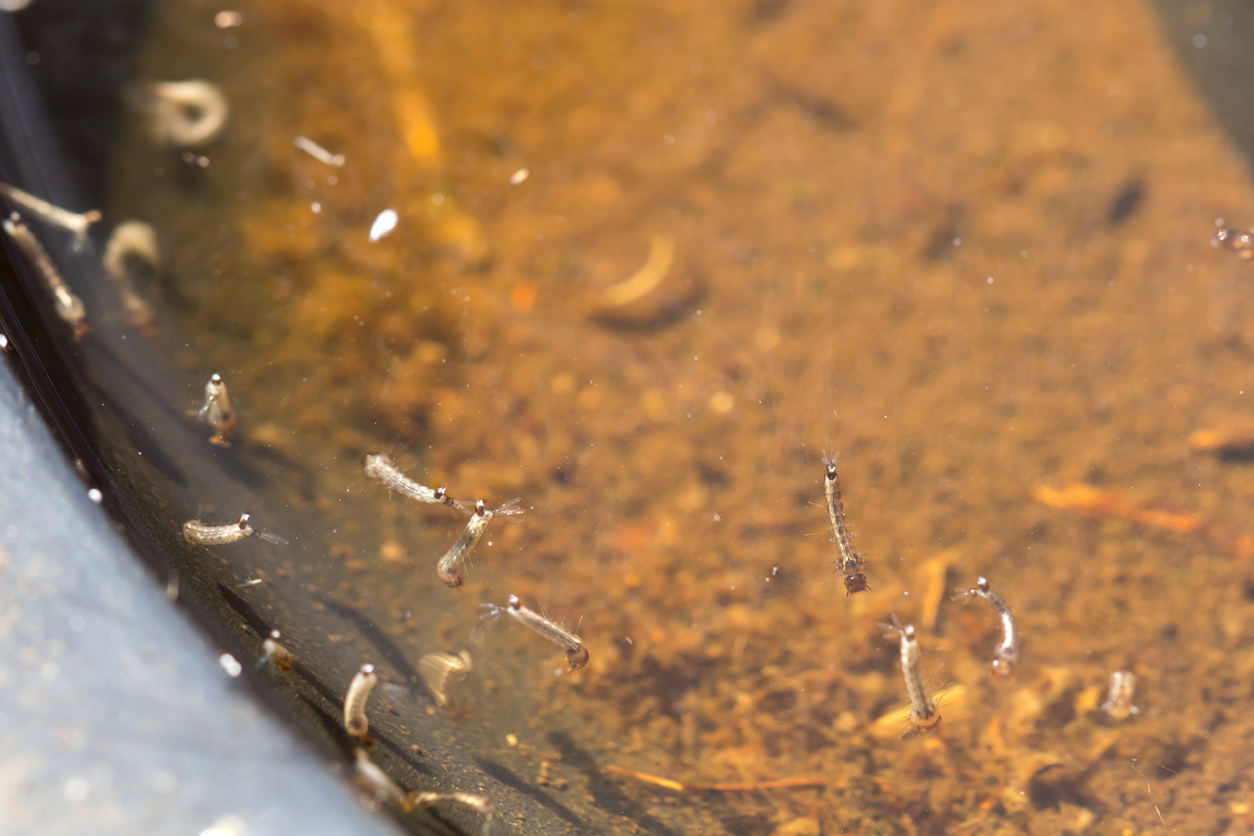 Homeowners can do a lot to reduce mosquitoes around their homes. Many times, though, they have no control over sources such as catch basins, agricultural waste, or wetlands.

Larvicding is the most efficient type of mosquito control, second only to the elimination of breeding sites. A limited number of chemicals are legally available for the control of mosquito larvae in Indiana. The following are available and should be used by trained professionals: 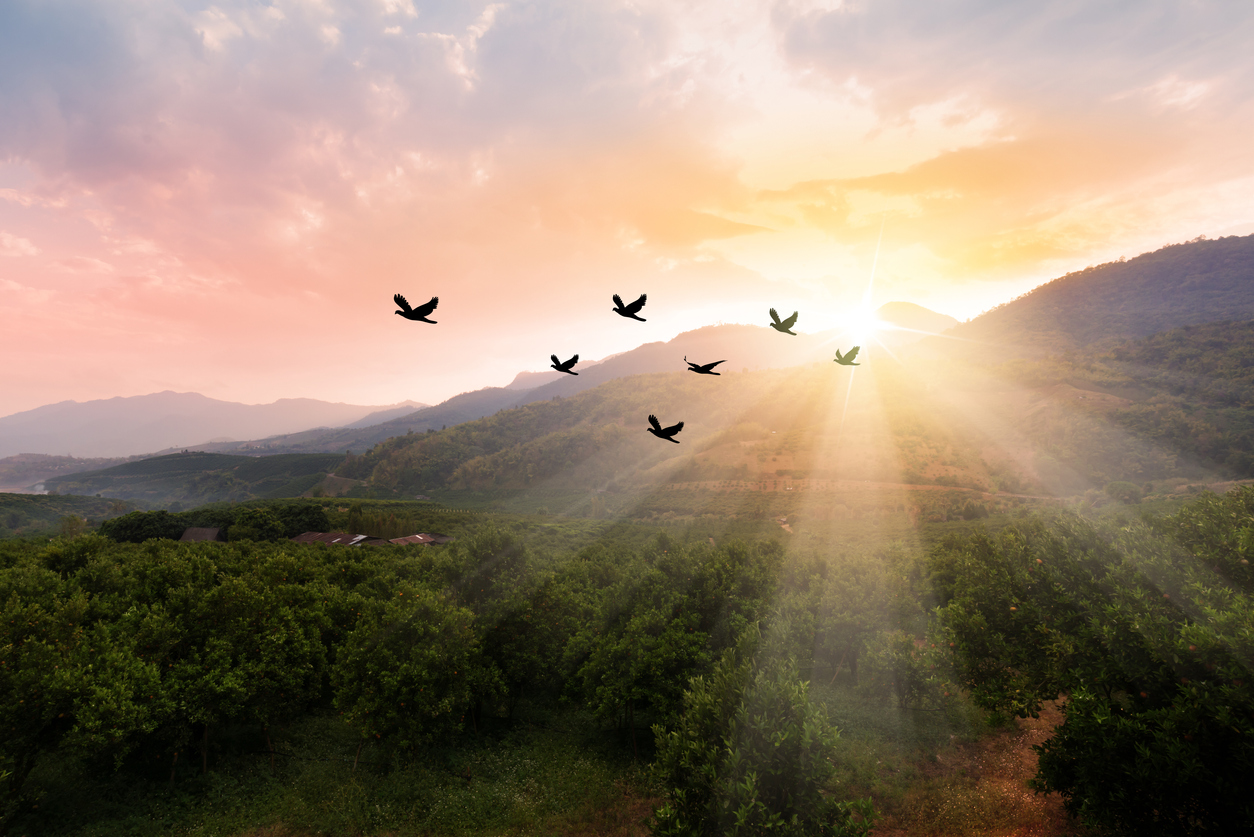 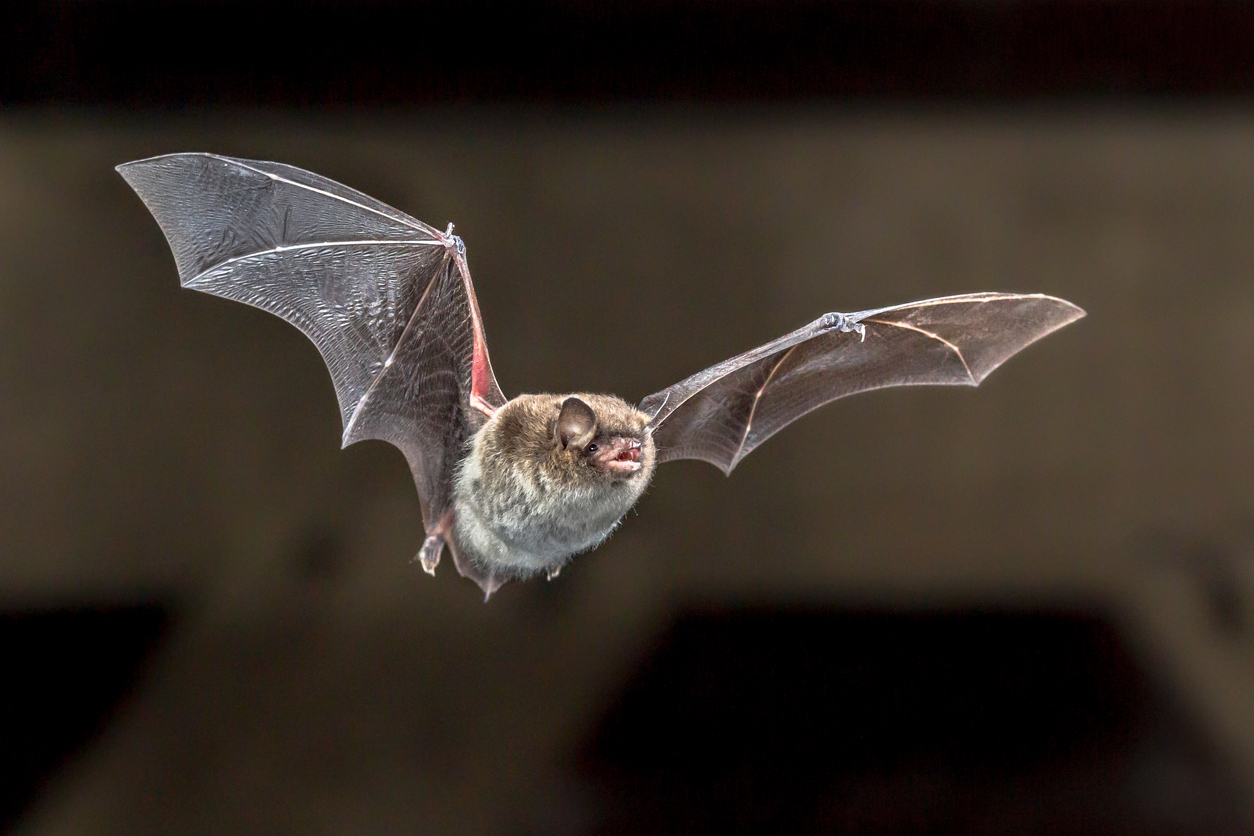 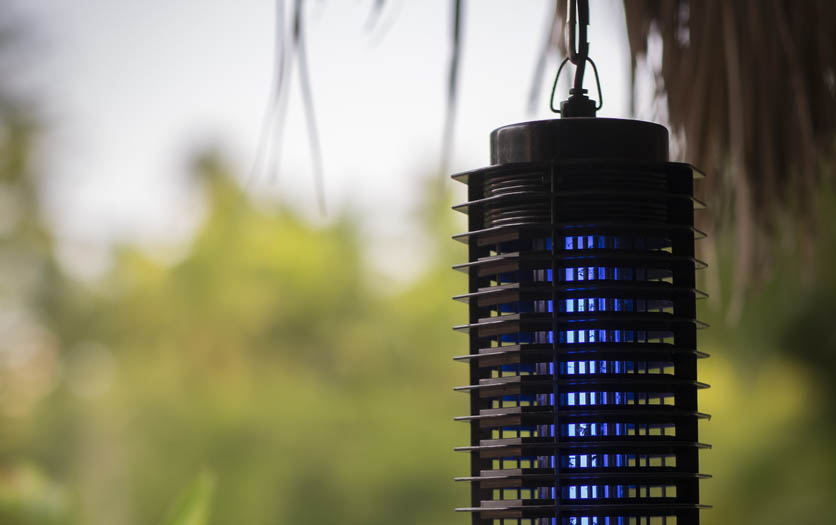