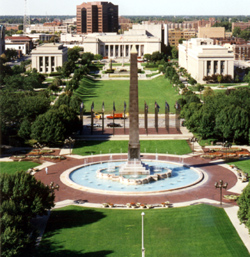 Veterans' Memorial Plaza is located just North of the Indiana War Memorial. It was completed in 1930. After its completion the plaza was paved so large groups could gather to listen to bands or watch the colored lights in the fountains, or for any large gathering. In 1975 the park was part of a beautification effort for the Bicentennial celebration of the Declaration of Independence. Grassy areas were added and trees were planted. On the northern section of the park, our national flag and a flag from each state wave in the breeze.

Visitors are drawn to the 100' tall Obelisk fountain in the center of the park. This magnificent four sided shaft of Berwick black granite represents the hopes and aspiration of the nation, a symbol of the power of nature to reproduce and continue the life of the country. Near the base are four bronze bas-relief panels representing law, science, religion and education. The plaza is one of the downtown area's most popular venues for outdoor events, among them the annual 4th Fest celebrating Independence Day and the Indianapolis Public Schools "Back to School Festival".