Story of the Monument's Limestone Sculptures 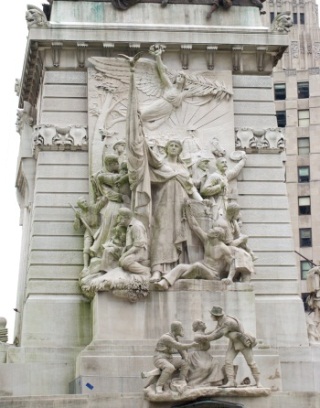 The visual beauty of the Indianapolis Soldiers and Sailors Monument lies in the balance of its bronze and limestone features.  The light-gray Indiana oolitic limestone contributes an inspirational feeling to the monument.  The abundant artwork fails to overwhelm the obelisk precisely because the limestone works harmonize while the bronze works contrast with pleasing result.

Austrian Rudolf Schwarz, a gifted modeler and sculptor, came to the U.S. in 1897 at the bidding of monument architect Bruno Schmitz to carve the important War and Peace groupings that were to be shaped out of huge stone blocks. The dramatic sculptures were lifelike and breathtaking in detail; however, European vs. American life experience came into play when a military veteran onlooker remarked that Civil War soldiers, to a man were young and beardless. Schwarz had carved the images with beards according to his European experience. Because the human figures looked “too German”, Schwarz was asked to remove the facial hair.

An Indianapolis Star Magazine article from July 8, 1962, reported that Schwarz took the change “in his usual jocular way.” Agreeing that the criticism was not without merit, he was quoted, “so …instead of a sculptor I became a barber, but used a chisel instead of a razor to shave off the full beard of my soldiers and make their physiognomy look American.” 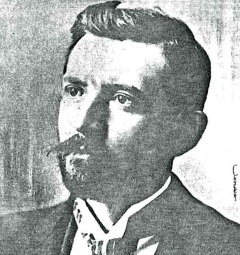 Reportedly a bohemian, Schwarz was absorbed in his art. A caption to a photograph of the artist in the Star Magazine article from 1962 reads, “it must have been a chore successfully to prepare Schwarz for this picture. Usually he was careless about his looks.”  Schwarz’ artist soul was also lacking in the ability to make a profit of any kind from his many commissions. Although he had a wife and three children, the family was usually penniless. The report indicates:

“Schwarz almost pointedly overlooked the possible financial rewards in favor of the artistic beauty to be created. And as a consequence, each of his ventures ended in heavy monetary losses.”

A friend and biographer, Theodore Stempfel said of Schwarz, “Trying to manage him was like trying to tame a young mustang.”

Friends and supporters rented a lot on Caven Street and built an adequate shed for Schwarz’s workshop. If Schwarz became secretive about a project, his friends would know it was a going to be a greater artistic than a financial success. Said Stempfel, “He always refused to adopt the higher prices we suggested because to his notion that would be thievery.”